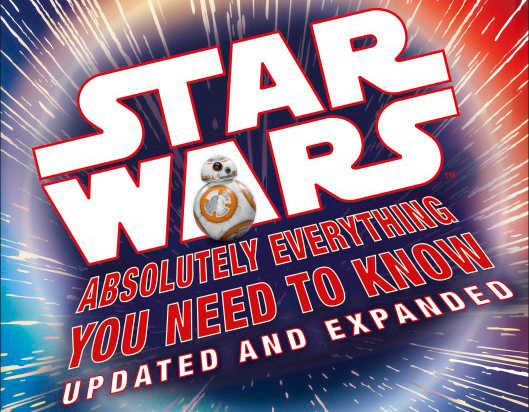 When Star Wars: Absolutely Everything You Need to Know was released back in 2015, it absolutely contained everything you needed to know...at that time. Since then, however, we've had another two movies, with a further two to be released in the next 6 months, two more seasons of Star Wars Rebels as well as a continuous stream of books and comics, among other things, so it stands to reason that an Updated and Expanded version would be released.

That means that not only do we get a Chapter 5 with some content from The Last Jedi, featuring the locations of Ahch-To and Canto Bight, as well as Snoke and his Praetorian Guards, the other chapters have also been added to with more details from The Force Awakens, Rogue One and seasons 3 & 4 of Star Wars Rebels. So while the original pages are still present and correct under the same chapter headings (at least for the most part), we now get an extra 56 pages of new material, while there are also some subtle changes to the collage opposite the Contents page, and keen eyes will notice a switch around between Yoda & BB-8 on the front cover and title page. Additionally, a whole new set of questions and images adorn the back of the book.

Truth be told, while it initially appears that the updates to the original book are simply the addition of the new content to accommodate what's been released over the past two years, the actual fact is that many of the original sections have been amended to include new information that has since come to light, such that the book almost feels like an extended remix of the first version!

So now we get extra sections such as Seasoned Veteran, Warrior Monk, Rey of Hope, Calculating Commander, Maz's Menagerie, Paradise of Doom and World Wrecker to name but a few, and no prizes for guessing to what each of those refer! Of the updated sections, Freedom Fighter and Streetsmart Padawan are now The Blind Jedi and Last of the Padawans respectively, while Command and Control and A Galaxy of Droids feature some more subtle changes to each page.

To conclude, you could be forgiven for thinking that all authors Adam Bray, Kerrie Dougherty, Cole Horton and Michael Kogge have done is simply take their original book and add a bunch of new content in an effort to get you to part with your money. However, the fact of the matter is that they have done a lot more than that, and they should be commended on revisiting the previous version and making it significantly fresh enough to warrant making it an essential purchase!

Star Wars: Absolutely Everything You Need To Know - Updated And Expanded is available now online and from all good bookstores, priced $21.99 in the U.S. and $28.99 in Canada.