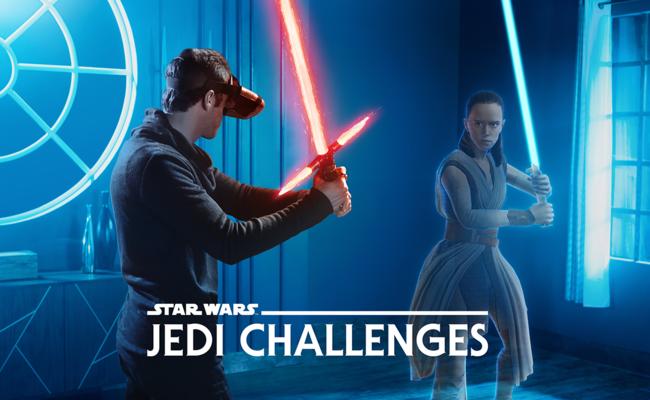 The wait is over. Star Wars: Jedi Challenges - Dark Side Expansion is available now as a free content update to the augmented reality (AR) experience, along with a limited-edition Kylo Ren Lightsaber Controller that is available for purchase today. Whats moreweve added a new local multiplayer game to the content update: Ship Battles.

Since its global launch last winter, Jedi Challenges has enthralled fans with the first-of-its-kind Star Wars AR gameplay, becoming one of the most popular and sought-after Star Wars tech devices of the season. Energized by fans excitement and requests, Lenovo worked with Disney on new gameplay experiences. In the Dark Side Expansion, the third free content expansion from Jedi Challenges, players can wield Kylo Rens iconic Lightsaber against formidable light side opponents such as Rey and Yoda in AR Lightsaber duels.

Tips and Tricks for the Win

Here are a few tips and tricks to help new players get started on the Dark Side Expansion and Ship Battles:

Dark Side Expansion
- Defeating the strongest opponents in the galaxy will require the use of abilities such as Pull. Wait for Yoda to hurl rocks at you before activating this power - cancelling out his ability and pulling him closer for attack.

- Select the Second Wind passive ability so that when your opponent lands the final blow youll be able to fully heal yourself and grab a second chance to strike down your adversary.

Ship Battles
- Prioritize Shielding and Communications sections to stay in the fight longer, or concentrate your attack strength on the Hangar Bay or turbolaser to blitz your opponent.

- In order to prevent turbolaser damage to your ship, when your opponent starts their bombing run, use the Support Call to begin your own bombing run.

- Learn to split your attack power throughout the game. At the start of your match, place two targets on the turbolasers and two on the Shielding section of the enemys ship. During the mid-late phase, focus three targets on the section with the least damage, and the fourth on the most damaged.

To use the Kylo Ren Lightsaber Controller or play the Dark Side Expansion update, the full Star Wars: Jedi Challenges starter kit is required (sold separately), which includes the Lenovo Mirage AR headset, Lightsaber controller, and Tracking Beacon. A compatible smartphone and the latest Jedi Challenges app, free to download on the App Store® and Google Play, are also required.

Lightsaber Battles: Perfect your Lightsaber skills by taking on some of the most menacing villains the dark side has to offer like Kylo Ren and Darth Vader, or battle new heroes like Rey and Yoda in the new Dark Side Expansion.

Holochess: Outwit your opponents in the ultimate game of concentration and strategy in the beloved Star Wars game that first appeared in Star Wars: A New Hope.

The Star Wars: Jedi Challenges - Kylo Ren Lightsaber is available now in select markets. In the U.S. availability is $99.99 on www.jedichallenges.com, www.bestbuy.com, www.amazon.com, www.walmart.com, www.target.com and others. Local pricing and availability will vary by country. The controller is fully compatible with all content in the Jedi Challenges app.

The Star Wars: Jedi Challenges starter kit is available on www.jedichallenges.com and select local retailers. Local pricing and availability will vary by country.

Jedi Council Forums
* Does anyone else collect all the many variants of vhs star wars movies?
* Political ****posting Thread
* Agents of SHIELD Discussion Thread (and Slingshot)
* Free Association Thread.
* Lol @ Animated Gifs here
* Cute Overload - The Thread (image heavy!)
* what song are you listening to? (v. 47) - Embedded Video Heavy
* What was the last movie you saw? (Ver. 2)
* The Dark Dark Lord Trilogy aka the Luceno/Stover Prequel Trilogy Read through and dicussion
* The Blue Moon Cantina XX: Home of the Dancing Ewoks