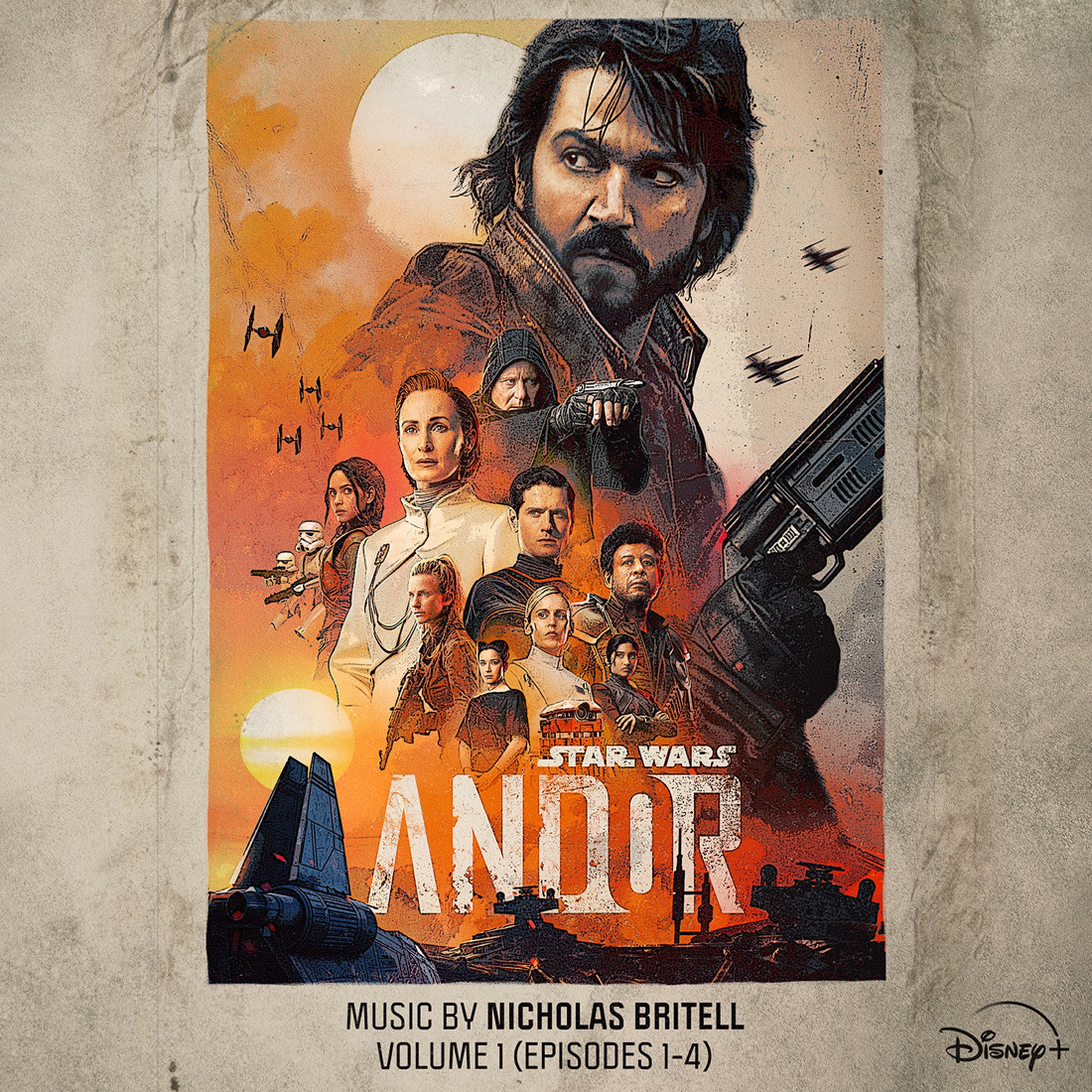 The Andor series explores a new perspective from the Star Wars galaxy, focusing on Cassian Andors (Diego Luna) journey to discover the difference he can make. The series brings forward the tale of the burgeoning rebellion against the Empire and how people and planets became involved. Its an era filled with danger, deception and intrigue where Cassian will embark on the path that is destined to turn him into a rebel hero. The original live action series is created by Tony Gilroy and executive produced by Kathleen Kennedy, Tony Gilroy, Sanne Wohlenberg, Diego Luna and Michelle Rejwan.

Britell says, I feel incredibly grateful to Tony Gilroy and Lucasfilm for giving me this opportunity and entrusting me with creating the score for Andor. Working with Tony on this epic series has been profoundly inspiring. Having grown up as a huge fan of the Star Wars galaxy, it's been a thrilling and actually quite emotional experience to become a part of this universe. Ive tried to create a musical landscape that feels authentic and integral to the story. Tony and I explored every nuance - from crafting the on-camera music, to creating the ever-evolving score, to imagining each episodes unique variations on the theme. I am truly excited to be releasing this Volume 1 of the original music to Andor, representing the soundtrack from Episodes 1 thru 4. More to come!

Commenting on the music, Andor creator and showrunner Tony Gilroy said, "How lucky am I? I had Nicholas Britell score my show. The best part? We needed seven hours of music and Nick lives in my neighborhood, so for the past two years, I've been biking to the studio and pretending to work when what I've really been doing is recharging my soul. Does it lessen the achievement if I say how much fun we had doing it? Or how humbled we were by the enormity? Or how much we learned? I hope not, cause we're gonna have to try it all over again next year."

Academy Award®-nominated and Emmy®-winning composer and pianist Nicholas Britell scores some of the most acclaimed film projects in recent history, including Dont Look Up, The King, If Beale Street Could Talk Vice, Moonlight, The Big Short and the upcoming She Said. For television, Britell has written the score for Barry Jenkins The Underground Railroad and also scores the multi-award-winning HBO series Succession, winning an Emmy® for Outstanding Original Main Title Theme. He is currently scoring the fourth season of Succession".

Disney+ is the dedicated streaming home for movies and shows from Disney, Pixar, Marvel, Star Wars, and National Geographic, along with The Simpsons and much more. In select international markets, it also includes the general entertainment content brand, Star. The flagship direct-to-consumer streaming service from The Walt Disney Company, Disney+ is part of the Disney Media & Entertainment Distribution segment. The service offers an ever-growing collection of exclusive originals, including feature-length films, documentaries, live-action and animated series, and short-form content. With unprecedented access to Disneys long history of incredible film and television entertainment, Disney+ is also the exclusive streaming home for the newest releases from The Walt Disney Studios. Disney+ is available as a standalone streaming service, as part of the Disney Bundle in the U.S. that gives subscribers access to Disney+, Hulu, and ESPN+, or as part of Combo+ in Latin America with Star+, the standalone general entertainment and sports streaming service in the region. For more, visit disneyplus.com, or find the Disney+ app on most mobile and connected TV devices.

Three-time Academy Award-nominated and Emmy-winning composer, pianist, and producer Nicholas Britell is known for his critically-acclaimed scores, including those for Adam McKays 2021 Dont Look Up, Barry Jenkins 2018 If Beale Street Could Talk, and Jenkins 2017 Academy Award Best Picture winner Moonlight. Britell received Academy Award nominations for those three films as well as BAFTA and Critics Choice nominations for Dont Look Up and If Beale Street Could Talk. He received Golden Globe and Critics Choice nominations as well as the 2016 Hollywood Music in Media Award for Best Original Score (Dramatic Feature) for Moonlight. The year prior, he wrote the score for Adam McKays The Big Short, which marked the start of his collaboration with the Academy Award winning writer-director-producer. In 2018, he wrote the score for McKays Vice, starring Christian Bale and Amy Adams. Britell has the distinction of winning Film Composer of the Year, Television Composer of the Year, Discovery of the Year, as well as winning Best Original Song Written for a Film at the World Soundtrack Awards all within the past 5 years. Britells upcoming film project includes Barry Jenkins The Lion King for Walt Disney Pictures.

Britell is also the mastermind behind some of TVs most beloved scores, notably the Succession Main Title Theme, which won him an Emmy and was dubbed the definitive TV Theme of the 21st Century by The Guardian. Continuing his work on the show over the following seasons, Britell received Emmy nominations for both his Season 2 and 3 scores, and will begin scoring Season 4 later this year. Other television scores he has composed include his Emmy-nominated score for Barry Jenkins The Underground Railroad and the score for HBOs Winning Time which he co-composed with Grammy-winning artist Robert Glasper. His critically acclaimed score for Lucasfilms Star Wars series Andor premiered on September 21st.

In addition to his work as a San Francisco Symphony Collaborative Partner, Britell is a Steinway Artist, a Creative Associate of the Juilliard School, and an honors and Phi Beta Kappa graduate of Harvard University.