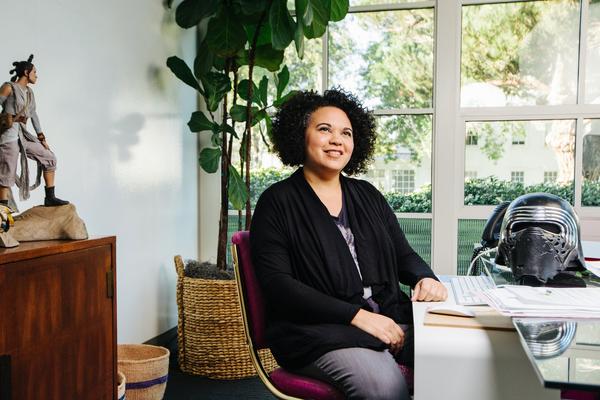 The Women Who Run The Star Wars Universe

Nathalia Holt from The Wall Street Journal has an article up covering the women who run Star Wars and it is a terrific read into who and what is happening to move Star Wars forward. Here's a brief snippet:

Princess Leia is tough, idealistic and frequently sardonic. Yet she is also quiet. Women in the original Star Wars trilogy spoke fewer than half as many words as their male colleagues did. Leias limited dialogue in Star Wars went unchallenged in 1977, but 40 years later, the lack of meaty roles for women and people of color in Hollywood is under new scrutiny. While those in the film industry ponder how to better reflect the diversity of human experience in their scripts, at Lucasfilm, a small group of women and men may have found one answer.

Five days a week, in the foggy hills of San Francisco, 11 writers and artists discuss the minutiae of storm troopers. This is the Lucasfilm story group, and its members hold the keys to everything Star Wars: Under their guidance, the franchises narratives are linked no matter the platform, whether its television, games, theme parks, publishing, merchandise or, of course, film. With their ideas shaping each character and setting, they dont see themselves as gatekeepers but as partners furthering the stories their creators want to tell.

Kathleen Kennedy founded the group in 2012 when she succeeded George Lucas as president of Lucasfilm, putting Kiri Hart, a former film and TV writer, in charge of the unit. Ms. Harts first move was to make the story group entirely female, starting with Rayne Roberts and Carrie Beck. Both women had experience in film development but had also worked in other arenas  Ms. Roberts in magazine publishing, and Ms. Beck with the Sundance Institute.

Their other qualification: a shared love of Star Wars. Ms. Hart, now senior vice president of development at Lucasfilm, grew up in Los Angeles a passionate fan of the first Star Wars film and especially Princess Leia. She was doing a bunch of things that women in movies didnt usually do, Ms. Hart said.

In Los Angeles, before they made the move to the Bay Area, the three women sat around a fire pit in Ms. Harts backyard, along with John Schwartz, a producer at Lucasfilm, and talked about their hopes for the future of Star Wars. They wanted to tell beautiful stories, fulfill the expectations of loyal fans and create meaningful female characters.

As a writer I was very hungry to create female characters who felt real, and I was interested in telling stories from an outsiders perspective, Ms. Hart said, recalling Hollywood in the early 2000s. There wasnt a lot of receptivity to the things I really wanted to write about at the time. I think there is increasing openness to those things now, which makes me really hopeful.