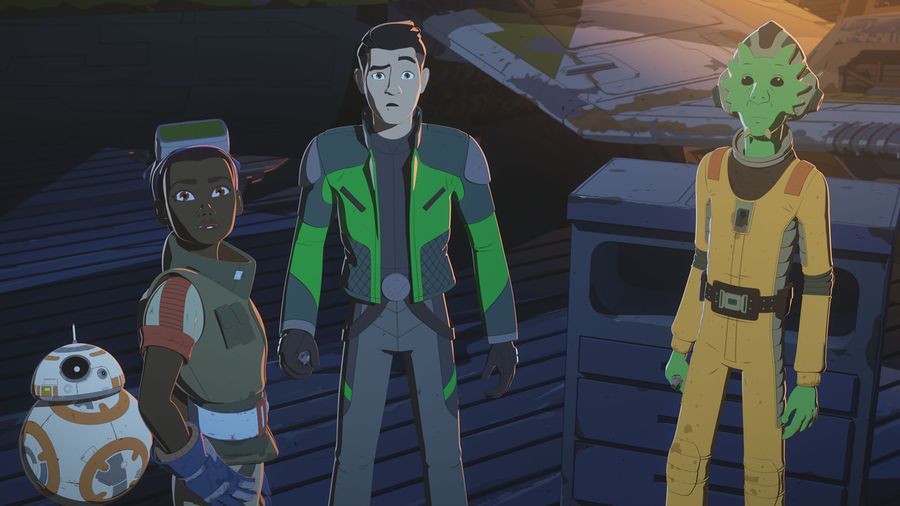 This episode starts off in the Fireball shop again just as the power goes out on Colossus. Kaz is tripping and bumping into things while Neeku is testing out new commlinks he acquired, something that will come into play later in the episode.

Captain Imanuel Doza makes a station announcement that power will be sparse over the next 100 hours to preserve fuel, so the team decides to go to Aunt Zs for drinks since they cant work. While there, Aunt Z tells the group about her conspiracy theory that Captain Doza is in cahoots with the First Order and is the reason the tower keeps the power on. She believes he uses the power outages to sneak in First Order ships under the cover of darkness.

This gets Kazs suspicions up and they all talk about the possibility of this being true or not. Then the overly literal Neeku drops a little bomb and says hes never met anyone from the First Order beforethat he knows of. Again, they are using a little slight of hand here, making us think it could be anyone on Colossus, even someone close to Neeku.

Hype Fazon enters the tavern and Kaz gets a little starstruck. Tam tells him they used to be good friends, but they had falling out after Hype joined the Aces and didnt speak to his old friends anymore. Kaz talks to Hype about racing and other duties the Aces perform which includes shipments and escorts. Hype explains that the other Aces are escorting a shipment of fuel into the station as they spoke, but he has an arrangement with Captain Doza. Anytime the First Order are involved it seems Hype doesnt have to be involved. So, is Hype a wanted man by the First Order? 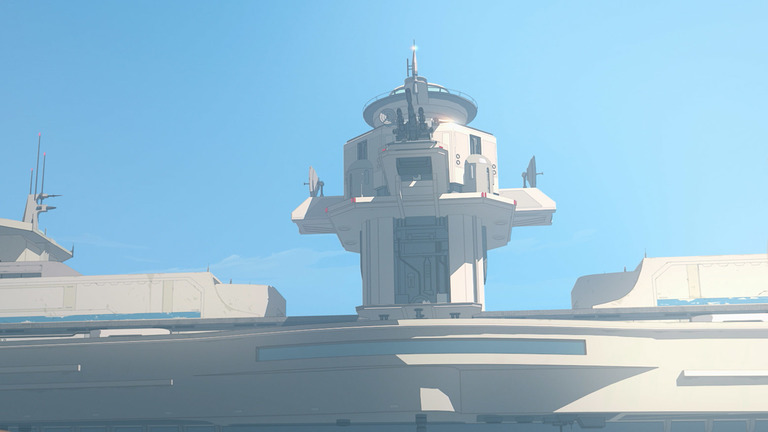 Kaz decides to sneak into the tower and find out whats going on for himself. He hears about a mandatory curfew put in place due to the power outages and runs into Tam and Neeku again. This arouses more suspicion and validates Aunt Zs theories that Doza is involved with the First Order and that these power outages and curfews are designed to keep this relationship a secret.

Major Vonreg and some Stormtroopers come out of the fuelling ship and make their way to the Tower to meet with Doza. Kaz, Tam and BB-8 run into Hype again who invites them to the Aces lounge, clearly to reconnect with Tam, but Kaz sees this as an opportunity to get closer to the tower. Kaz is trying to get information from Hype about this arrangement but hes more interested into speaking to Tam. This distraction allows Kaz to sneak off and continue the pursuit of Vonreg.

Kaz is stopped by a locked door so to listen to Vonregs meeting with Doza, he places one of the two communicators on a service droids tray who is bringing drinks to the meeting.

We then see and hear the conversation between Vonreg and Doza. Vonreg is offering Doza the protection of the First Order from pirate attacks which he says are ever increasing. Of course, Doza doesnt know, or at least doesnt let on that he knows the pirates and the First Order are working together. They threaten each other with reporting their own criminal activities to the New Republic, with neither of them flinching.

Doza refuses this offer of protection and fuel and Vonreg leaves but not before offering up a pun laced threat, until we have a deal, your future will be dim.

Kaz hears this but the feedback from the communicators causes the Stormtroopers to see him and they chase him through the halls. He ducks into a room only to find that hes snuck into Torras room by accident. Her room is covered in little Easter Eggs so have a look when you re-watch the episode and brush up on your Aurebesh as well.

Torra thinks Kaz is there because he has feelings for her and tries to hide him when the Stormtroopers arrive. She shoves him out of her window and tries to throw them off his trail, but it doesnt work. From Aunt Zs tavern window, Tam, Neeku and the other patrons have a good view of the action as Kaz is sneaking along the outside of the window. Trying not to fall, things only get worse as the Troopers start to fire blasters at him and Kaz really must use some acrobatics to avoid getting blasted. BB-8, who has been following along from the inside, opens a door for Kaz just in time.

Kaz thinks its only a matter of time before Doza makes a deal with the First Order and wants to report his findings to Poe Dameron. Vonreg runs into Captain Doza and Torra in the hallway and informs him theyve spotted a spy outside his office and plan on capturing him. Torra tells them it was just a friend of hers and her father vouches for that, ordering Vonreg and his Troopers to leave. 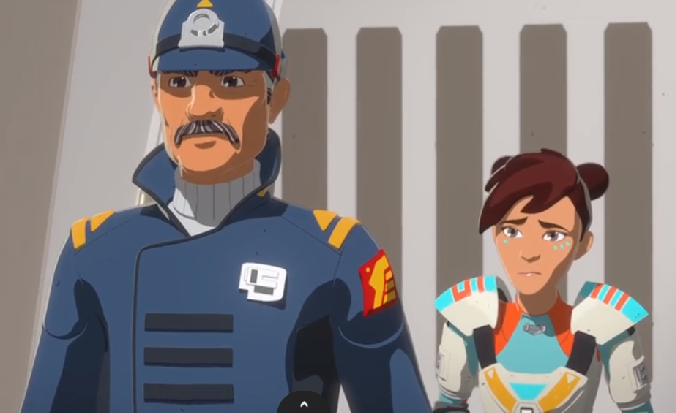 Kaz is happy to be back at the shop but keeps what he knows to himself, not telling Tam and Neeku what he overheard outside Dozas office. As the power comes back on to coincide with the departure of the First Order, Captain Doza is looking at video footage of Kaz, wondering who he is as grave music plays.

So, what did we learn from this episode? We now know that Captain Doza has a relationship with the First Order, albeit a shaky one. It seems hes been able to stay out of their way for the most part, but the noose is tightening so how long can he last? Its obvious hes a tough, well experienced leader and doesnt take anything lying down but the First Order usually gets what they want so well see.

You can cross him off the list as far as First Order spies are concerned so did we get any closer to learning who it might be? Hypes arrangement seems unusual and could mean either hes a wanted man by the First Order or hes part of their ranks and doesnt wish to be seen talking with them. Either way hes covering up for somebody, we just dont know who yet.

We got a nice little bit between Torra and Kaz who seem like eventually they will be a good team. Shes very young so Im sure a big brother scenario isnt too far off. We again hear that Yeager was once a great pilot and we know now that Tam also has dreams of being an Ace one day but neither of those two facts brings us closer to the truth.

This episode first and foremost should give Kaz a renewed interest in his mission. Now that he has solid evidence the First Order is connected to Colossus, this should help him to uncover the truth. Obviously, the Captain Doza angle is a red herring but that path will almost certainly bring him closer to the truth.

I liked this episode much better than the last, and is my favorite of the season, as it added the complexity of the First Order directly into the mix and gave us another layer of Kazs determination. The interaction between him and Torra was great and his escape from the First Order was very nice to look at and was paced very well. In fact, this entire episode paced well for me, thanks to the writing, something that the show has struggled with a bit in my opinion. A little odd though that we saw the Aces lounge, with Aces Freya, Griff and Bo, and had zero interaction with them. Should they not have wondered why all those people were in their lounge? Nitpicking a well written episode

Next up weve got The Children from Tehar where

Sounds like well be learning a lot about the First Orders intentions next week. Why would they be after children? We know they recruit at a very young age, thanks to Brendol Huxs Commandants Cadets program, but there must be something unique about these children obviously if both sides want them. Well find out next week!