No doubt youve seen countless Star Wars documentaries in your life if youre a hardcore fan. There is practically no stone left unturned when it comes to the galaxy far, far away but that doesnt stop people from trying every year. But, occasionally, we get something unique and thats usually because the makers of these films turn the cameras on the one thing that sets them apart from everyone else, themselves. By making the story of Star Wars a personal one, its practically the only topic not subject to counterfeit. Such is the case with Adam Harris and his film, My Saga

My Saga follows the journey of Adam Harris (that's me), a husband, father and Star Wars fan. Eight years ago, the discovery of a brain tumour and a serious health scare caused Adam to re-evaluate his priorities and follow his dreams.

The film opens with a strong 80s aesthetic and instantly brings you back to a time before the internet, social media and cell phones. The comparisons to other throw backs such as Stranger Things are warranted but are needed to drive the point home. Adam Harris is a life-long and dedicated Star Wars fanperiod.

In the first act we meet Adam and his son Jack, also a Star Wars fan, and the recent struggles Adam has had with his health. Its this scare that has motivated him to go on a trip of a lifetime, a Star Wars adventure to California with Jack hoping to accomplish two things, fulfill his childhood fantasies and strengthen the relationship between him and his son.

In the end, he accomplishes both but not in a direct manner and not in the way he would have guessed, or maybe even preferred. Thats the thing about this film, it softens some hard edges in Adams life to be sure, but it starts from a fanboy myopic point of view, so youll have to wait to get to the cathartic stage. And in doing so youll sit through much too long segments of interviews with Star Wars celebrities and alumni who end up being not as interesting as some of the fan interviews or even Adam himself.

So just when your mind starts to wander, along comes great segments like his interview with Perry King (radio Han Solo) where a very emotional Adam gets to heal old wounds. It's here you really get a glimpse of why this journey was so important to Adams well being not only as a father, but as a person. Equally intriguing is Adams encounter with Donnie Bilbrey and his son Gabe at Star Wars Celebration 2015. Gabe, whose favorite character is the Emperor, has been diagnosed with Tuberous Sclerosis Complex and has been embraced by the Star Wars community. Its these highly emotional moments where the film and the Star Wars community succeeds. 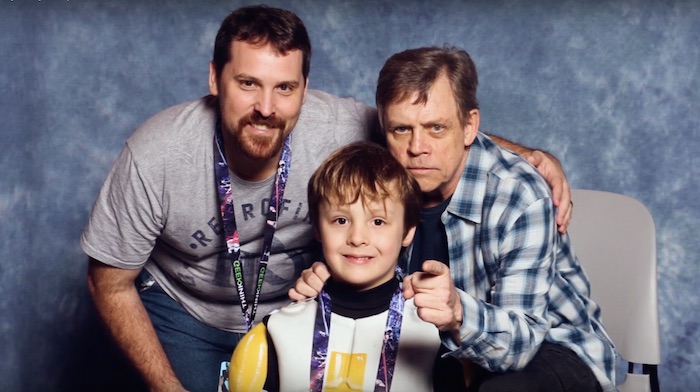 While the documentary itself has nothing new to offer to the hardened Star Wars fan and is generally light on substance, what it does do is offer us hope in a time of despair. Itll come as no surprise to tell you that the Star Wars fandom right now is struggling to find its footing. Whether its George Lucas, Disney, Rian Johnson, The Last Jedi or Rose Tico, fans right now are having to defend their positions more than ever as online hate groups and a general lack of decorum has floated to the surface. The negativity surrounding these, and other perceived culpabilities is at an all-time high thanks to Twitter, Facebook and other social media outlets but what Adam does is reinforce the idea that Star Wars is more than the sum of its parts. He reminds us that Star Wars is bigger than of all us and that it is something to be loved and cherished, not used as a tool to denigrate others.

A moment near the end of this movie that really clicks is when Adam opens up even more and eases into uncomfortable truths. Although this film is structurally built around taking his son to California for a once in a lifetime Star Wars adventure, you can see the pain in Adams face when he admits his son didnt really have a good time, and that in turn kinda ruined his trip as well.

In doing so, you can see the moment Adam realizes what this whole journey has truly been about. In trying to be the worlds best dad, something he admits was absent in his life, he perhaps forgot just being present and kind to your child is sometimes the greatest gift you can give. And experiencing Star Wars takes all kinds of forms, whether its attending Celebrations, meeting the creators, or simply just an annual tradition of seeing the latest release the day it hits theatres.

So, if youre feeling down or disheartened by the fanbase, this film, while an emotionally demanding one, will leave you with a sense of hope. And if I could sum up the message of the film with one sentence, it would be this line from Adam about Star Wars

It doesnt seem to matter why it exists, its just good to know that it does

Adam is currently negotiating a distribution deal for release later this year, and if it does, I encourage you to seek it out. In case you need another reason, any profits from the documentary will be donated to the Starlight Children's Foundation in Australia.

For more information and the latest updates on "My Saga", click HERE.

To find out more about the Starlight Children's Foundation, click HERE.