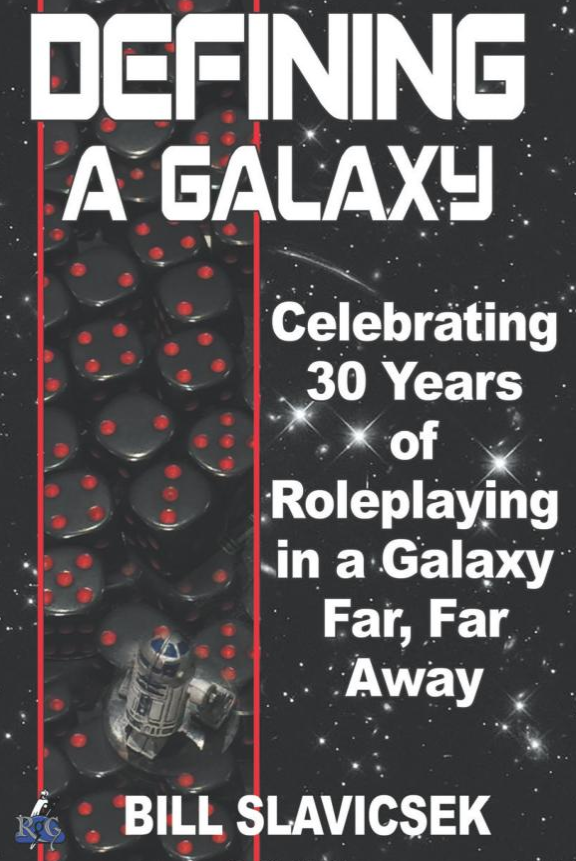 Defining the Galaxy: Celebrating 30 Years of Roleplaying in a Galaxy Far, Far Away, written by Bill Slavicsek, is a fun recounting of how one of the most influential contributors to the entire Star Wars galaxy came to be. Self-authored, Bill takes us on a Star Wars adventure going all the way back to May 25th 1977 when his life, like many of us, was radically altered. His contributions to Star Wars role playing games and accompanying guide books cannot be overstated as they have gone on to shape the franchise and influence it to this very day.

Depending on your age, you might not know this story or the name Slavicsek, but whatever level of Star Wars fan you are, you have to understand one thing; Bill contribution to Star Wars is nearly unparalleled. This book chronicles his early days writing for local newspapers, then moving on to the world of board and hobby gaming where he worked for West End Games, TSR Inc., and Wizards of the Coast, to name a few. His close collaborations with Lucasfilm through the decades paved the way for the early canonical system which would shape the galaxy as we know it.

His first two releases, Star Wars: The Roleplaying Game and accompanying Star Wars: The Sourcebook both published in 1987, opened up the universe and went much deeper than the original films. So much of what we now consider canon, like the names of ships and alien species, that werent spelled out in the films, came from these books.

Now, its important to understand one thing. What you get out of this book will entirely depend on your Star Wars knowledge and your experience, or lack thereof, in the hobby game sector will come into play. I learned nothing new about Star Wars, Lucasfilm or the Star Wars RPG releases, but did learn a few interesting things going on behind the scenes at the various stops along the way. And when you have a book written by the subject, anecdotes and trivia are expected and welcome.

The book has very little flash and bang and there are no pictures to depict the passage of time, something I would have enjoyed, but Bills ability to tell a story more than makes up for that. I wouldve enjoyed more time hearing about the office dynamics during those early years at West End Games, which I suspect were magical times, but thats probably just a romantic notion more than a reality.

Like I said, what you learn will be determined by your base knowledge and your experience level when playing Role Playing Games (RPGs) but it shouldnt dull your enjoyment any less. This is a fun book to read regardless of how much you now about both subjects and kudos to Bill for keeping it light and upbeat. And because its written entirely by Bill and relying on his memory, which seems pretty intact from my point of view, its a pretty quick read. Theres little to no involvement from anyone else other than the occasional paraphrasing by Bill.

Because Bill has been part of the extended Star Wars family for so long, this book not only tells his history, but parallels the history of Star Wars as well. This is where you might find the book a little unsurprising, as even an average Star Wars fan will know most of the topics covered.

For me personally, while I did play the odd game of Dungeons & Dragons, my main interest in RPGs was reading the great stories that these developers were writing. Bill acknowledges as much when he says

that was a common occurrence among RPG fans in those days; many of them didnt have a gaming group to play with, but they still bought the material to read.

And these early Star Wars sourcebooks and guides from Bill and the West End group were a fantastic read. They truly did open our eyes to a whole new universe, way beyond what George Lucas gave us on screen. I was happy to have Bill acknowledge that portion of the fan base and that we were on his mind when writing the source materials.

The layout and format of Defining a Galaxy, by no accident, reads and feels like a RPG rule book. Thats good muscle memory for fans and players of RPG who will feel right at home with this aesthetic. The book even ends with an expanded set of rules for you to use with you D6 mechanics, meant to speed up the game play and make it even more cinematic.

This is an endearing quality about Bill, that he started this whole journey as a gamer himself, being a GM for most of his life. Even today he routinely plays as much as time allows with his wife, family and friends.

Similar to Star Wars: Knight of the Old Republic by Alex Kane, which is mostly told from the point of view by the people that were there, this is as a first-hand account as you can get. This of course makes it feel much more authentic and real, as opposed to a shadow writer or biographer. In fact, BioWare and KotOR are mentioned and play a small part in Bills history, so reading both books make for a nice pairing.

While the first two chapters are spent explaining Bills personal relationship with Star Wars and gaming, and a little exposition on the original trilogy, for me the book really starts in Chapter 3. Its here we learn about Bills first introduction to the professional world of game development and having to choose between working at West End Games or writing for Vending Machine Times. And no offense to the fine folks at Vending Machine Times, but its clear Bill made the right decision. 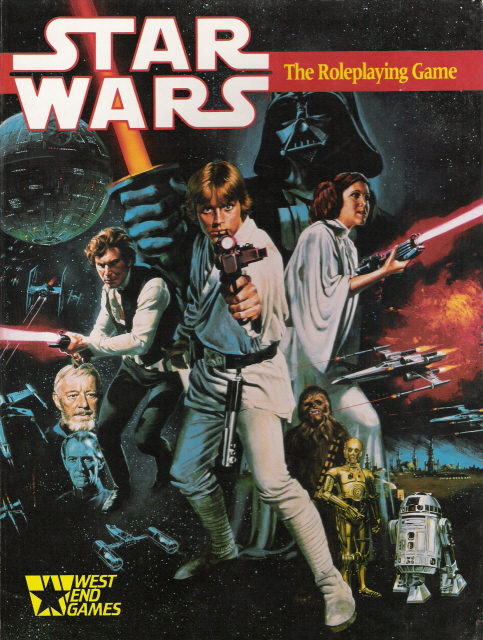 The book is more than a look back at the history of the game, sourcebook(s) and guides; its a thorough breakdown and examination of all three phases. But for me, chapters 7-11 is where the rubber meets the road and are the ones I enjoyed the most. Mostly because, as I mentioned earlier, was more of a reader of these materials than a user. So, getting a good look at what went into the sourcebooks, galaxy guides, and the creation of the expanded universe, is in my wheelhouse. Admittedly, a lot of it was repetitive and information I had already learned, but compiled together in one easy to read package is a delight.

His breakdown of the sourcebook by section/chapter is great only from the standpoint that I havent read the book myself in a quite a while, but its all there. And you will enjoy the conversation he had with Lucasfilm over why Ithorians shouldnt simply be called the more derogatory Hammerhead, a name that Bill found offensive. And discussing the creation of the Holocron database and the Lucasfilm Story Group, and ushering in the Expanded Universe era is always a good time, especially when you get to read about Pablo Hidalgo, Timothy Zahn and my friend Leland Chee.

In reality, this book does a very good job of selling you on how important The Star Wars Sourcebook and his editions of A Guide to the Star Wars Universe have been to the Star Wars lexicon. But again, to be repetitive, if youre reading this book, youve likely read those as well.

The book goes right up to the release of Solo: A Star Wars Story so we get Bills impression of the new Disney era of Star Wars. Unsurprisingly, hes a big fan of the publishing side of Lucasfilm pointing to Thrawn by his friend Timothy Zahn, and Marvels Doctor Aphra by Kieron Gillen as some of his favorites. As for the films, he likes them citing Solo and Rogue One as the two he is most keen on.

Theres a hint of arrogance and condescension to Bills writing that I wouldnt accept from almost anybody else. But for the man whose résumé includes titles such as A Guide to the Star Wars Universe, Star Wars Sourcebook, and Galaxy Guide, its just fine. This is the guy who wrote and defined the galaxy which is so near and dear to my heart, and whose books I cherish still to this day. Hes earned the right to be a little boastful and anyone that says otherwise hasnt read them.

Which leads me to my only real problem with this book, who is its target audience? Anyone who is familiar with the world of Star Wars RPGs probably doesnt need to be told about the plots and release dates of Star Wars films. Nor do they need to be told how things used to be, certainly when it comes to pastimes such as buying movie tickets at the box office or most any pre-internet burden.

I can only attribute it to a lack of self-awareness. Perhaps Bill isnt entirely sure that this current generation of Star Wars fans remembers or even knows about the tremendous contributions he made to the galaxy far, far away?
In an age when faster, quicker, and easier is the MO, sites like Wookieepedia are king and sourcebooks and guides are in danger of becoming antiquated. And while they look great on bookshelves, are they just too cumbersome for todays fans? As reference guides maybe thats true, but as stories they are simply irreplaceable.

As I suggested, what you gleam from Defining a Galaxy will depend on what level of Star Wars fan you are. I learned nothing new about Star Wars or the Star Wars RPG game itself, but the book is very anecdotal and there are more than enough factoids buried within, that regardless of your experience level, you should learn something new. And best of all, its a fun read from start to finish, and I would easily recommend it for no other reason than that.

Thanks for everything Bill.