The latest issue of Marvel Comics Star Wars series reveals that Luke Skywalkers Rogue Squadron got its name from a familiar band of rebels. Thats right; Luke took inspiration from the heroic actions of Jyn Erso and her daring rebels in Rogue One when it came time to name his squad of pilots.

Marvel's ongoing Star Wars comics series is revealing with each issue, slowly expanding on and connecting the larger canonical universe. This latest issue, Star Wars #52, shows us again how the sacrifice of Jyn Erso and the other Rogue One rebels has had a ripple effect throughout the original trilogy.

In this issue, with Leia, Luke and the other rebels still stuck in the Mako-Ta base, trapped by the Empire, it takes some fancy flying by Han Solo to give them a fighting chance and allow them to get out of the station. By tripping the failsafes, Han was able to get the hanger doors to open, allowing Luke and his fellow pilots the opportunity to enter the fray. Its here where we get this exchange 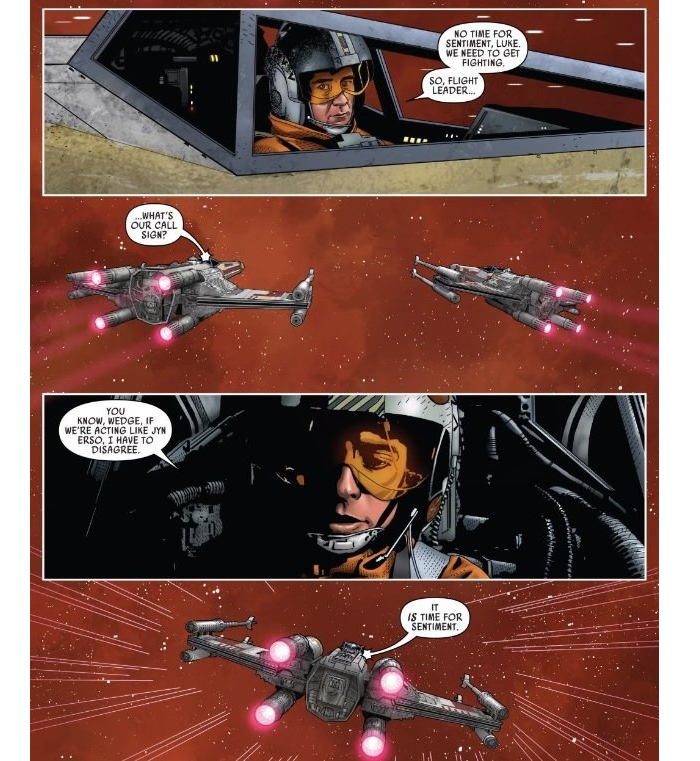 Previously in the series (the Ashes of Jeddha arc) it is revealed that Luke, Leia, and Han visited Jeddha to learn more about the holy city. While there they learn of the heroic actions of the Rogue One squad...

Rogue One took whatever steps they needed. People making distractions, sacrificing themselves, amping up the signal. All improvised. This chain of sacrificeall leading me taking that shot.

It's clear to see how the already heroic Luke took inspiration from Jyn Erso when during that mission, her and her squad, sacrificed themselves for the greater good. This seems to have resonated with Skywalker as he says to Wedge Antilles

"Well, I guess this is what Jyn Erso felt like. I trust the Force, I save the galaxy."

Wedge responds that it's no time for sentiment, and that the Rebels need a call sign for the battle. Luke, seizing the moment, decides to honor his fallen fellow rebels by calling themselves "Rogue Squadron", a name familiar to any Star Wars fan. 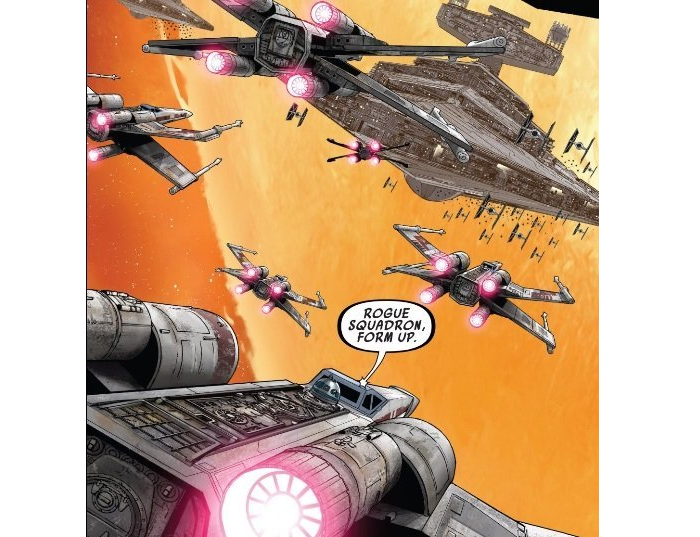 As this series continues on, I'm sure we'll get more big reveals. Like all current runs of Marvel Star Wars comics, the writers are being given carte blanche when it comes expanding on past events. Already we've seen huge inclusions into the canon universe by this and other series such as the Charles Soule Darth Vader series.

A big thanks have to go to writer Kieron Gillen and artist Salvador Larroca, as we are witness to this emotional and stirring moment that finally connects the two pieces of Star Wars lore.