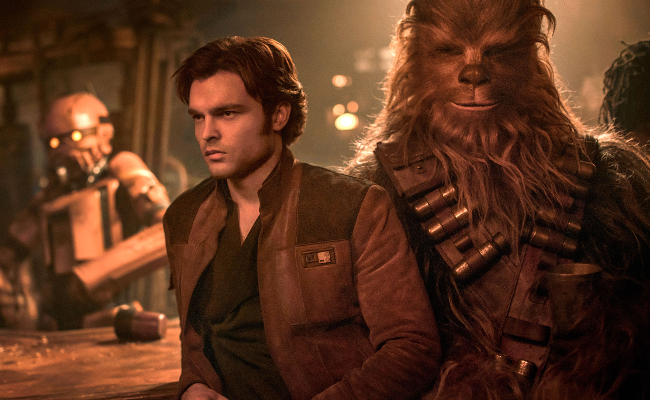 Han Solo is steering into the skid. Thats the technique a driver uses when things are going totally wrong, when the vehicle is slipping out of control. Turn in the direction where youre losing control, and, counterintuitively, you can swing yourself back on course.

We already know how the rest of his life plays out, but in Solo: A Star Wars Story, set about 10 years before Han meets Luke in that Mos Eisley cantina, the galactic smuggler (Alden Ehrenreich, taking over from Harrison Ford) is making all the wrong moves.

He tries to join the Empire but washes out of its Imperial Flight Academy. Hes a fugitive from the authorities, along with Qira (Emilia Clarkes Bonnie to his Clyde). And hes eager to prove his worth among the worst denizens of the galactic underworld. Later in his life, Han Solo may prove to be selfless, but in Ron Howards new film, hes still trying as hard as he can to be selfish.

It really is a rite of passage, Howard says. The story sends him on an unexpected journey that hurtles him into a dangerous world surrounded by charismatic but lawless characters. And thats where he needs to try to make his way and gain his freedom. So, so much of this is about trying to satisfy that yearning to really be free, to really call his own shots in a very lawless part of the galaxy and at a time when it was wide-open.

Freedomas someone in our own galaxy once notedis just another word for nothing left to lose. But as young Han goes on his quest to assemble a team for a dangerous train heist, he ends up collecting some unwelcome baggage: friends.