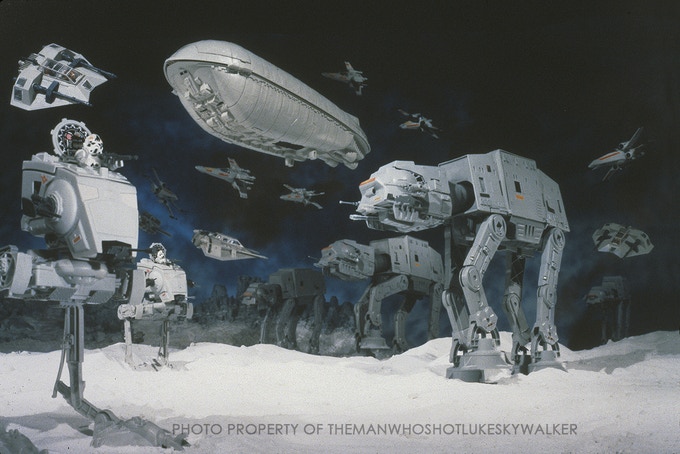 Kim DM Simmons began photographing Star Wars for Kenner back in 1981 when he started working for Kenner's previous photographer, Roy Frankenfield. He eventually took over as the main photographer and continued working with Kenner all the way through the 1990s after Hasbro's acquisition of the company and up until 2001.

Kim's first book in the series, Kenner Star Wars Photography 1977-1979, was a huge hit with fans and collectors, selling out quickly. The big question that followed was, when would the next book be released? Well, here it is! Volume II features some of the most iconic photos of the 80s that you'll instantly recognize from the most popular era of Star Wars toys.

This deluxe large format, full-color, hardbound book will contain numerous professional high-resolution photographs taken in 1980-1982 along with stories from Kim Simmons. There are going to be 2 versions of the book - the regular version will be around 170 pages while the Special Collector's Edition will be over 240 pages with additional photos and a section dedicated to the Micro Collection line!

The book will feature an introduction by none-other-than Steve Sansweet of Rancho Obi-Wan, the largest collection of Star Wars memorabilia on the planet. Steve was part of Lucasfilm for many years and we are delighted to have him contributing to this project with his knowledge, experience, and appreciation of all things Star Wars.

For those of you who grew up during the great Kenner-era these nostalgic photos will instantly transport you back to your childhood! Including promotional, cardback, and box art of your favorite characters, ships, vehicles, and monsters, this collection includes everything from the AT-AT to Zuckuss!

Whether you're new to the vintage Kenner Star Wars phenomenon or an avid collector, you'll want this second volume in the series on your book shelf.

It's also worth noting that the book is going to be printed in Kenner's hometown of Cincinnati, OH. This gives us the ability to really insure that the quality of the book and the contents are of the highest standards. A special box will be created as well to make sure that these books arrive to you undamaged.

In order to make it possible to publish this volume, we are offering a variety of exciting and exclusive perks to those who back the project.

We're very excited to offer Kenner Star Wars Photography Volume I 1977-1979 as part of the rewards for specific tiers. This book is out-of-print and the only way to get it will be through this campaign. For those who missed out it's a perfect opportunity to collect the entire set of books!