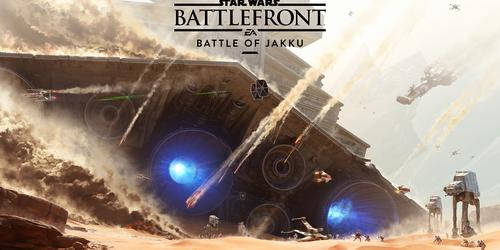 We are proud to give you a first visual glimpse of The Battle of Jakku, coming to Star Wars Battlefront on December 1st, 2015, for all who pre-order, and a week later for all other game holders. The Battle of Jakku was the pivotal moment when the New Republic confronted key Imperial holdouts on a remote desert planet.

Taking place in the aftermath of the Rebel victory in the Battle of Endor, players will experience the events that created the massive, battle-scarred landscape of Jakku shown in Star Wars: The Force Awakens.

In the artwork above, a Star Destroyer has crash landed, and from the belly of this battle-scared metal giant, a myriad of Imperial ground troops have evacuated and engaged with Rebel troops, also strangers to this desert planet.

This intensity of battle was one of the aspects that DICE Concept Artist Anton Grandert wanted to convey when creating the Jakku artwork. The size difference between the visual elements was another:


Theres a David and Goliath theme to this, says Grandert. The epic, huge super structures of the Star Destroyers contrast against the tiny but brave Rebel soldiers fighting the Imperial forces. 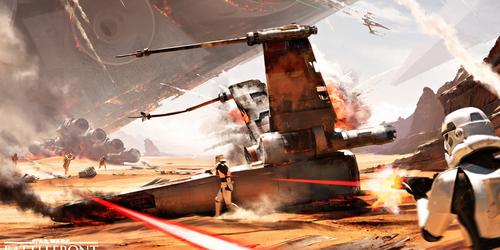 And true to the core gameplay of Star Wars Battlefront, the artwork features many different aspects of Star Wars battle fantasies - on land and in the sky.

We wanted to portray a battle completely surrounding you, in every direction. Debris is falling from the sky, telling the story of battles above. On the surface of the planet you can see ground troops as well as X-wings, all taking part of the fight, Grandert says.

Jedi Council Forums
* Just a spoonful of trouble - UDC IX
* Agents of SHIELD Discussion Thread (and Slingshot)
* RYL: Under Quarantine (Please read mod announcement on pg. 946)
* The Definitive Thread to Rank All Star Wars Films (in terms of Your Favorite), TPM to TROS
* "Race" Relations (was "U.S. Society and Black Men")
* Accelerationism Fan Club: The 2020 U.S. Presidential Election
* Got a question? Ask it here
* A Star Wars Story: Between Epitaphs
* The EPISODE IX - Rise of Skywalker - Thread - Untagged Spoilers Allowed!
* what song are you listening to? (v. 47) - Embedded Video Heavy