Today, Lucasfilm dropped a Star Wars: Episode VII bombshell: They would no longer make us call the movie "Episode VII." Instead, the first sequel is The Force Awakens. It's a strong title with an active verb construction and a deeply symbolic meaning for the franchise as a whole right now. But until today, The Force Awakens wasn't on the radar of anyone outside of the production team.

Except for one person.

ScreenCrush's Mike Ryan did some Googling after the news broke and discovered that, on December 21, 2012 -- coincidentally, the day everyone thought the world would end -- a fan with the username "Queen Gimmedala" posted the exact title in an Episode VII title speculation thread on TheForce.Net's own Jedi Council Forums. 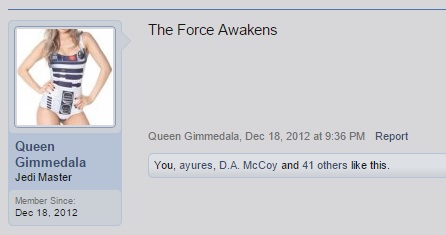 Shortly after I saw Mike's post, I reached out to "Queen Gimmedala" through our forum's private-messaging system. The title of my message was "You guessed the name of Episode VII correctly." As it turned out, I was the one to break this news to her.

When I asked her what made her think of The Force Awakens, she wrote back with a really great response that I want to share here (with her permission). I bolded a few key sentences because I think her rationale gets to the heart of some of the saga's enduring themes.

I'm in love with Star Wars, PT and OT. I do not follow any of the EU. So my "knowledge" of the SW universe is really limited to the 6 movies and the recent tv shows.

Ultimately this was a random guess. No inside info or connection to Lucas. But to me it seemed logical that the first movie in this trilogy would need to address the force. I'm a believer that the movie titles in each trilogy closely relate and I suspect this will carry over for the ST.

So I knew it was going to be 3 words, and the force. I also know that the wording would be vague/ambiguous/old fashioned like all the other six movie titles.

THANK YOU, for bringing this to my attention. Even though I was of course pleased with the name, I totally forgot I came up with it first!

In a follow-up post in the same thread where two years ago she became the Nostradamus of Star Wars, "Queen Gimmedala" wrote, "I'm sure using this methodology you can correctly guess Episode 8 and 9! I can't wait to throw in my next 'guess'."

This is partly an extremely funny coincidence and partly a reflection of how important continuity and thematic repetition is in the Star Wars saga. Now let's all get excited. Star Wars: The Force Awakens will be released on December 18, 2015.