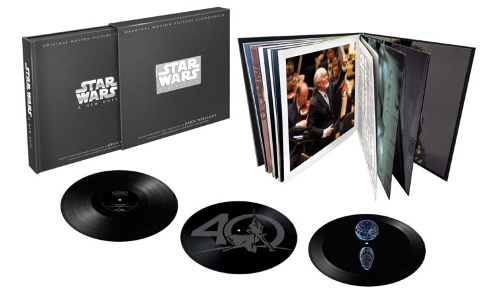 Your record collection is about to be infused with the power of the Force.

Walt Disney Records announced today that a special vinyl collectors edition of the remastered original motion picture soundtrack for Star Wars: A New Hope will be released on December 1. Created in celebration of the 40th anniversary of John Williams classic score, the 3-LP set, made with 180-gram vinyl, features a 48-page hardcover book and a special feature that would delight even the Emperor: a 3D hologram experience with the Death Star on disc 3, side A, and the Star Wars 40th anniversary logo on side B. Both were hand-etched by Tristan Duke, who crafted the vinyl wizardry of Jack Whites Lazaretto.

The box set will also include rare behind-the-scenes photos from the films production and scoring sessions, along with two essays in the accompanying hardcover book: Tuning Up a Galaxy, written by author Jeff Bond (Danse Macabre: 25 years of Danny Elfman and Tim Burton, The Music of Star Trek) focuses on the phenomenon of Star Wars and how John Williams score changed film music forever. John Williams Journey to Star Wars by Jeff Eldridge discusses John Williams early career  from his musical heritage to his continuing legacy.

Whether youve never owned a Star Wars soundtrack or have memories of spinning the original Star Wars vinyl in 1977, this will be a release long remembered.