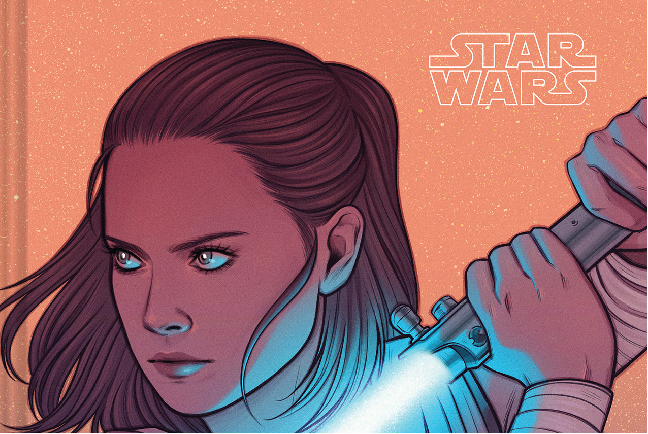 Star Wars: Women of the Galaxy - Review And Interview!

Amy Ratcliffe wears many hats these days and just recently shes added one more to the listauthor. But well get to that in a moment.

Amy is the managing editor over at Nerdist and a contributor to StarWars.com, and has written for outlets such as Star Wars Insider and IGN. Shes a regular host at Star Wars Celebration and other conventions and cohosts the Lattes with Leia" podcast. In person, shes incredibly sincere and articulate and instantly gives you a sense, unintentionally, that you need to up your Star Wars gamea lot. Shes got the goods folks.

Besides all of that, its her most recent triumph, and it is a triumph, that brought us together at New York Comic Con for a quick chat. Hitting bookshelves today is her first book, Star Wars: Women of the Galaxy released by Chronicle Books and features over 100 illustrations by 18 incredible artists.

The look and overall feel of this book is a winner from the get-go with a great front and back cover by artist Jen Bartel. Her portrait is my favorite Rey from the lot and sets a high bar for the rest to follow, which they do. I love introspective work so for me some of the standouts are Annie Stolls Phasma, Viv Tanners Satine Kryze, Sara Alfageehs Steela Gerrera, Amy Beth Christensens Tam Ryvora and Eli Baumgartners Val to name a few. Whether you like portraits or action, theres something for everyone here and each artist is more than up to the task.

Amys to the point writing plays as both reference material and a journey through Star Wars history. She wastes no page space and includes just enough exposition about each character to get you on your way. You wont hear their whole story, thats not her goal, but at the same time more than enough to peak your interest. I found myself hitting the bookshelf a couple of times to follow up on a few things, great fun. 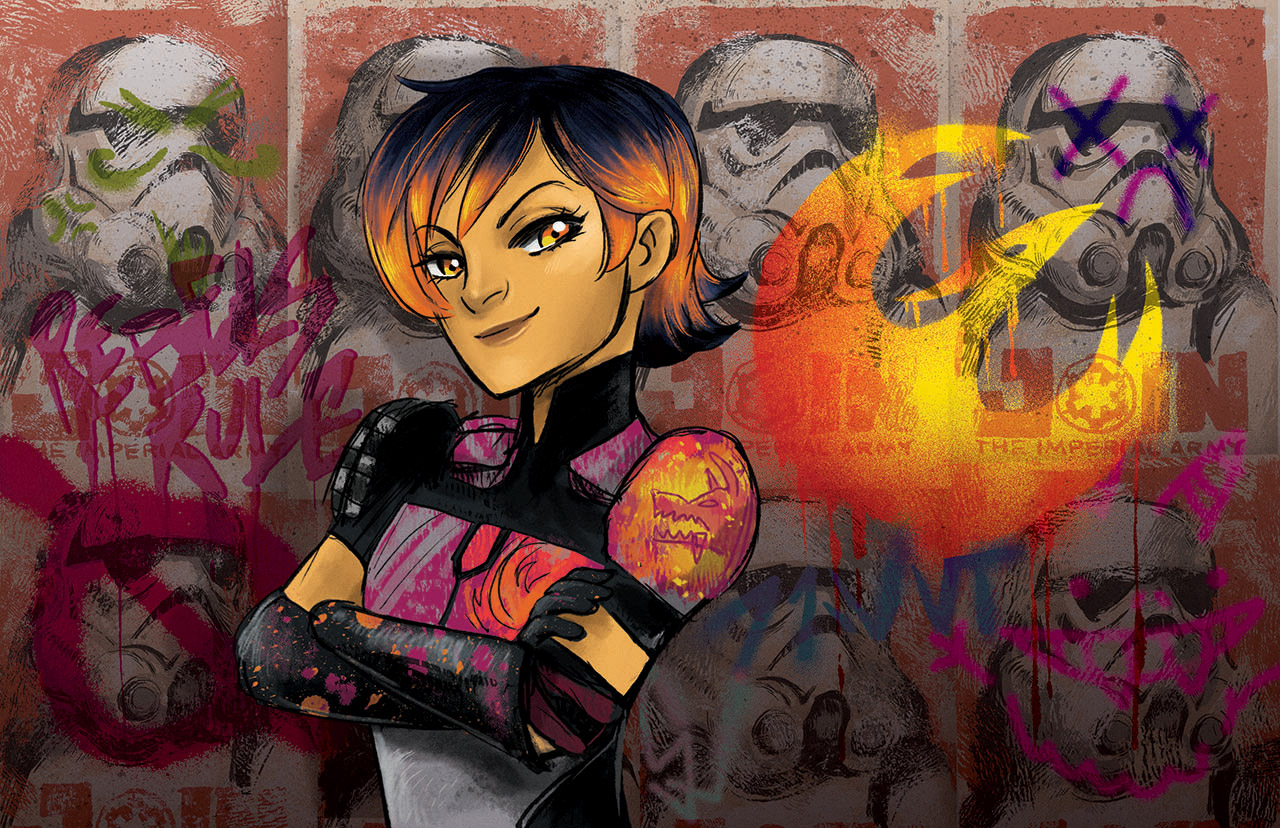 The killer layout scheme brings it all together for a wonderful package which is easy to read, kudos to the editor Steve Mockus and the Chronicle team. The only nitpicky thing I can think of is perhaps having the artists name on the page with their art, that would save a lot of flipping to the back. But again, thats just me being picky, not a slight on the books overall impact, which is strong.

The book features many characters youve certainly heard of (Leia Organa, Rey, Ahsoka Tano) and some you may not have heard of (Everi Chalis, Derla Pidys, Tallie Lintra) but each one gets equal treatment.

And that for me was the most redeeming quality about this book, the reverence on every page. Yes, Leia, Ahsoka and some others get a little bit extra than the rest, but you can tell from Amys sincere words and the artists touch, that each character was handled with much respect and love. And youll most certainly learn something about these characters, especially the more obscure ones, and for many probably just the fact that they exist! And in the interest of full disclosure, there are a couple of inclusions that will make your eyes swell a little, they did for me anyways.

Equally compelling is that it serves as a reference book and sort of gateway to many of the ancillary products Star Wars has. Amys deep well of knowledge and long reach extends far beyond the films and traditional trivia and truly makes the galaxy feel big. Shes pulled from novels, novellas, video games, comic books, graphic novels, you name it, shes sourced it. Simply put, the incredible amount of labor behind this book is all over the pages and worth mentioning.

This is a must buy for any Star Wars fan in my opinion and Amy is deserving of the accolades. I look forward to what she's got up her sleeve for next time.

The women of the Star Wars galaxy drive its stories and saga forward at every level. This beautifully illustrated, fully authorized book profiles 75 fascinating female characters from across films, fiction, comics, animation, and games. Featuring Leia Organa, Rey, Ahsoka Tano, Iden Versio, Jyn Erso, Rose Tico, Maz Kanata, and many more, each character is explored through key story beats, fresh insights, and behind-the-scenes details by author Amy Ratcliffe. Also showcasing more than 100 all-new illustrations by a dynamic range of female and non-binary artists, here is an inspiring celebration of the characters that help create a galaxy far, far away. 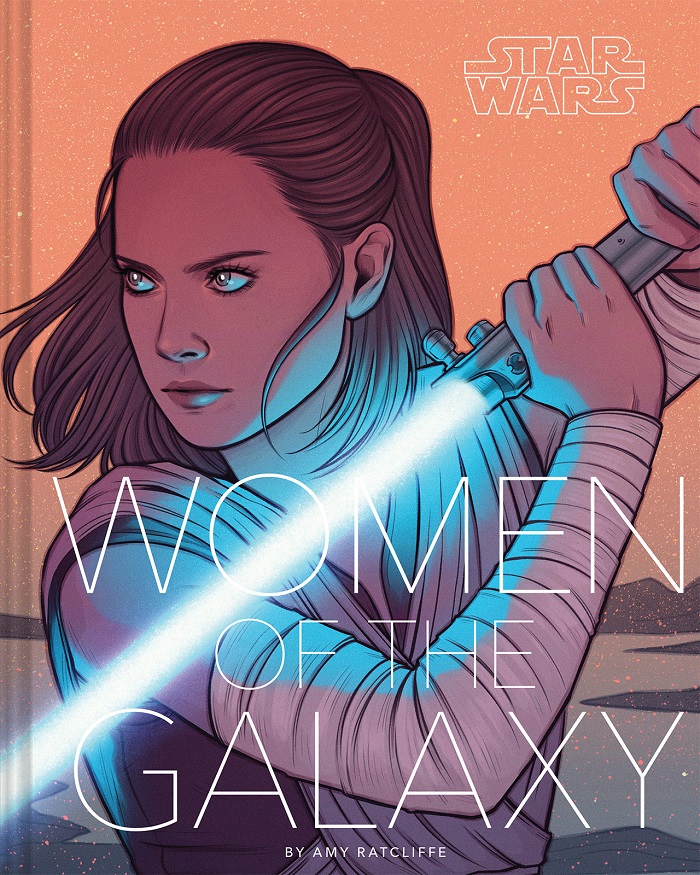 Tell me about the moment when you arrived at New York Comic Con and saw the front cover of your book, on this huge display for everyone to see?

I saw it Wednesday on line when Chronicle posted a picture of it. But when I got here on Thursday and saw it for the first time, to see the product of something, this book, that Ive put so much blood and sweat and hours into, and Reys face is so big and beautiful. I couldnt help but get emotional.

This is your first book and Im sure youve had other ideas in the past. What was it about this project that made it the to the top of the list for you?

It had to be the right project. Talking to Steve Mockus about how they wanted to approach the book that it wasnt just going to be a line by line explanation of their lives, but they really wanted to celebrate these characters. And not just the Reys and Leias and Padmes, but also a Ventress and a Talzin and other characters from the books that maybe everybody doesnt know.

It was kind of the attitude and tone of the book that I liked, where it wasnt about pandering or meeting a quota. It was about highlighting these awesome characters and brining in this incredible variety of 18 different illustrators to not only do over 100 illustrations but let them do the characters in their own style, let the artists infuse their own style.

Chronicle and Lucasfilm wanted to celebrate it, and treat it respectfully and with care, and that attitude sold me on the idea.

The art in this book is stellar. How did you go about choosing who would illustrate who?

I definitely made a couple of suggestions, like Karen Hallion is an artist whos worked with Lucasfilm before and whose work I love. Mostly it was the folks at Chronicle and Lucasfilm who pulled from a pool of talent they had access to from Topps cards and previous books and comics. Im not sure what the selection process was like, but I knew a handful of them from Celebrations and other shows.

It was fun once I found out the full list of artists, to go through their websites, Instagrams and Twitter accounts and look at all their incredible work. I reached out them to get permission to download their art, so I could start promoting their work, connecting it to the book, and they were all so enthusiastic to be a part of the book, it was crazy.

Youve got very recent characters in this book, including Tam Ryvora from the just released Star Wars Resistance. Tell me about the timeline?

The whole process was a bit of a blur since we made the book on an accelerated timeline. I wrote my initial draft, and then the editors at Chronicle had to find 18 artists, speak to them and assign over 100 illustrations which must have been a huge undertaking.

It was probably 3 months after submitting my draft until I started seeing art come in. They would share rough sketches with me and thats when it dawned on me that it was really happening, because you never know how its going to go but at that point it became real.

Deciding on which characters to feature must have been quite the process?

One of the most fun parts for me was begin able to assemble these characters and research them, often falling into the rabbit hole, but trying to keep focused at the same time.

Some of them, even the ones I thought I knew well, had their start in Legends so when I would be researching I was surprising myself with how deep some of them run.

The list for the most part was put together by Chronicle Books and Lucasfilm, but there was a few I had input on, characters that I wanted in there from the beginning. The most random example would be Derla Pidys from the Canto Bight novella (The Wine in Dreams) who was a Sommelier, a wine expert. That story by Mira Grant was so beautiful to me and a character or career we dont see often in Star Wars, so lets show other cool characters that exist beyond bounty hunters and Jedi. 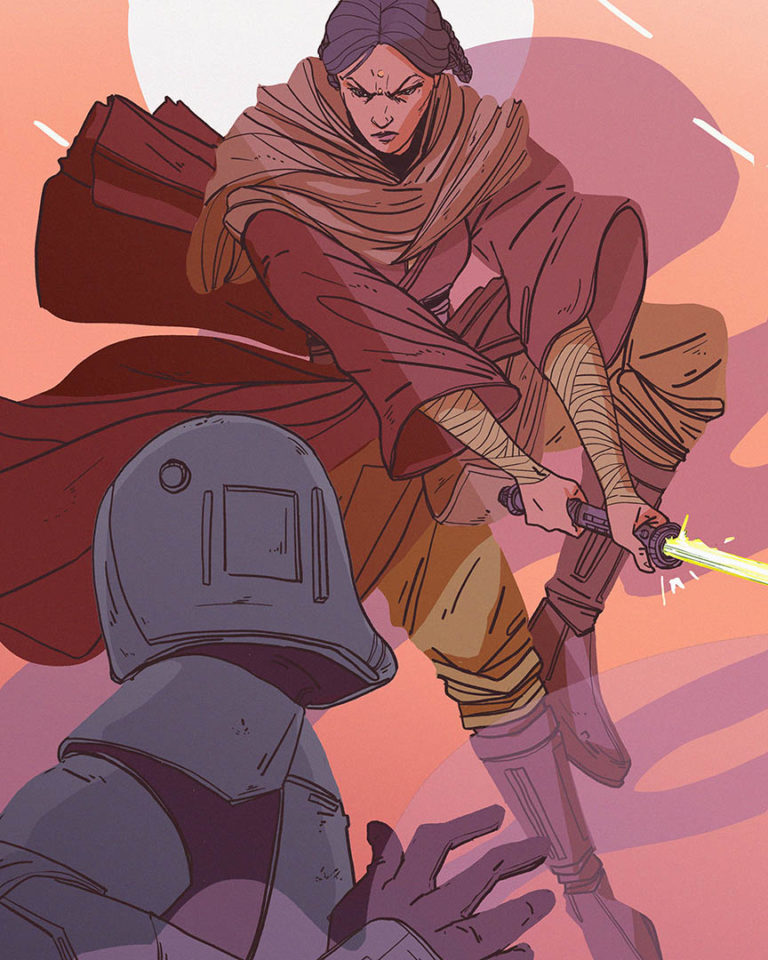 How were you able to write about characters who hadnt been released yet or had just arrived on the scene?

The things that were still in the works when I started were The Last Jedi, Solo and Star Wars Resistance, the list comes right up to Resistance. Then it was a matter of writing as many characters as I could with the information I had, like Last Shot by Daniel José Older helped tremendously with characters like L3-37 and Qira.

For Resistance characters, it was the last thing I did while I waited for information on them. Lucasfilm was so helpful with sharing anything that would help with characters like Tam when they could. They gave me things like descriptions and over views and toy packaging, anything that could help shape their personality.

I used a lot of RPG skills when developing these characters that I didnt have many details on. Things like whats their personality like, what is their charisma, things that could help guide me towards a profile.

Obviously, the focus on female characters has increased the last few years. Tell about why the release of a book like this is so important?

Weve come such a long way in Star Wars from starting with Mon Mothma and Leia, to Padme and her handmaidens. I love all of them, but I think things really started becoming more of an open field with The Clone Wars and Rebels series, and of course the new movies.

Theres always room for progress but if you take a step back and look at this book, with as many characters as we included, we had just as many that we couldnt fit. So, I hope people see this and become more vocal about these characters that they love and understand theres a galaxy full of them.

To order a copy of Star Wars: Women of the Galaxy, click HERE.

For more information about this book and other great releases from Chronicle Books, click HERE.