The Mand "Oh!" Lorian: Top Five Moments from The Child

The Mandalorian may only be two episodes in but the show continues to impress in a short amount of time, and The Child only continues that impressive streak. Last week we chose our five favorite moments from the pilot that wowed us, and this week there isnt a shortage of excellent moments. Let's take a look! 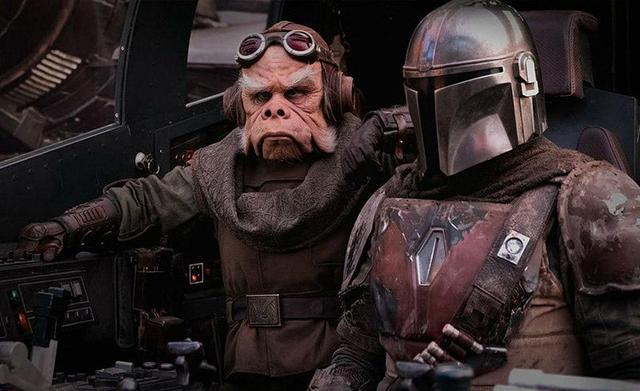 5.The Mandalorian and Kuiil Repair the Razor Crest.

One of my favorite parts of The Mandalorian so far has been the budding relationship between the Mandalorian and the Ughnolte himself, Kuiil. Although the two characters have known each other for a couple of days, their chemistry is already top-notch. From learning to ride a blurrg to negotiating with Jawas, Kuiil serves as this series Yoda. Since his introduction, he's been a partner for the Mandalorian, pointing him towards his bounty and in the final sequence of this episode, fixing the Razor Crest. To me, no moment accents their partnership better than their montage of repairing the Mandalorian's ship.

After returning from, the clash with the Mudhorn, with parts in hand, the Mandalorian complains that it will take days to fix the scavenged ship.Kuiil cooly responds with "if you care to help it might go faster, there is much to be done." and what follows is a really fun, 80's-like montage of the two repairing the ship.

What I think makes this whole sequence so noteworthy is the discussion between the two as the job is done. The Mandalorian tries to pay Kuiil for his work, as well as attempting to have him join his crew, but the Ugnaught refuses both. He's found a peaceful life away from the servitude that seems to have dominated his life until recently and offers a look into the character's motivations.

As I've said before, I think it's small moments like this, that make The Mandalorian so special. Sure, it has awesome action and Star Wars goodness, but it also adds great character moments in small interactions like we see at the end of this episode. Kuiil gives us answers while also putting forward new questions of his life before. Just an awesome interaction.

No new character from The Mandalorian has taken the Star Wars community by storm more than little Yiddle. "The Asset" as Dave Filoni and Jon Favreau call him is an insanely adorable 50-year-old baby that when paired with his bounty hunter protector, provides some high quality "Awwww" moments to the fray.

Throughout the episode, we see these moments between the Mandalorian and Yiddle and in my opinion, these moments make the show better, as well as provide the audience with so much needed comic relief.

From the Mandalorian telling little Yiddle to "spit that out" when a frog-like creature hops across the ground, only for him to eat it, to the more intimate moments of Yiddle reaching out his hand to help heal his new babysitter. The dynamic between the Mandalorian and his little bounty is a lot of fun, and sets up some obvious forthcoming conflicts, and may lead him to not turn in the bounty on his new little friend.

As far as I'm concerned, they can give us as much Yiddle and Mando as they like!

So far, the moments on this list have been the quieter moments and interactions between our new characters, from here on out, it's all action, starting with the Transdoshan ambush at the beginning of the episode. The fight starts slowly, with Yiddle and the Mandalorian walking in a canyon alone, when our bounty hunter stops, unsure if something is coming.

In the build-up to the fight, you feel the tension and attention to detail, seeing our would-be attackers in the reflection of the Mandalorian's helmet only to attack seconds later. The fight itself is a nice change of pace to the fights we saw in the previous episode because our hero is on the ropes for a majority of the fight. You feel every hit and shot and think for just a moment that maybe the Mandalorian isn't as unbeatable as we've seen before. A majority of this episode's fights have that same tone of if the Mandalorian will make it out and if he does he'll be battered pretty badly.

This fight does an excellent job of continuing the action from the previous episode, all while setting the tone of the ones that will come later on. All while showing how difficult it may be to get little Yiddle back to Dr. Pershing and Warner Herzog's character.

After a long journey back to his ship, the Mandalorian finds Jawas stripping the Razor Crest of everything valuable and justifiably, he loses his composure. Blowing up Jawas left and right and leading to an insane chase, filled with the Mandalorian scaling a fast-moving Sandcrawler. The whole time Jawas are throwing whatever scrap and garbage they can at the bounty hunter until the Mandalorian is finally driven off the moving fortress.

What I love so much about this scene is just how insane and Star Wars-y it is. While the Jawas in A New Hope may not have deserved their untimely deaths by the Empire, I couldn't help but cheer for the Mandalorian as he was blowing these poor Jawas up. On top of all that insanity, it also felt like a classic train-escape sequence from movies like Indiana Jones. There's just so much to like about this sequence!

If the first two episodes are any indication, there's going to be a jaw-dropping, galaxy changing moment in every episode because little Yiddle continues to surprise me. After his secretive and unexpected introduction, I thought that Yiddle was done surprising us, but that all went out the window when the Mandalorian went up against the Mudhorn.

Just like every other fight and chase in the episode, the Mandalorian looks down and out, getting destroyed by this bloodthirsty monster. Making his last stand, the Mandalorian pulls out a knife, fighting until the very end, the Mudhorn charging at him, when suddenly we see Yiddle extend his hand. The beast is lifted into the air, wailing and screaming in confusion. Unsure of what is happening the Mandalorian looks equally confused and only just delivers the killing blow.

Not only is this an incredibly well-shot sequence, filled with excellent cinematography and music, but it's also a goosebump-inducing moment that has massive ramifications for the series, and introduces the Force into a show that we all assumed wouldn't have any mention of the mythical power. This show continues to surprise me in unexpected ways and we still have 5 episodes left. What else could they introduce?

It's a very exciting time to be a Star Wars fan!

Did these moments make your top 5? If not which ones would you add to the list? Let us know down below!