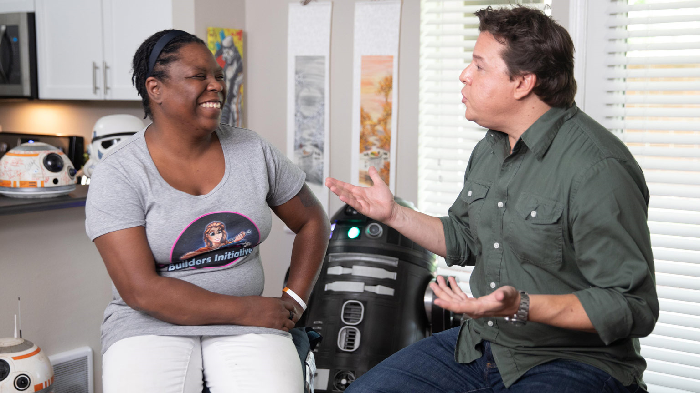 This time we spoke with Christina Cato, member of 501st, co-creator of the Stardusts Builders Initiative and expert droid builder!

I think we need to change this misperception that women cant do things like this.

Tell me about the Stardust Builders Initiative?

The Stardust Builders Initiative is a Facebook group I started with Naila Browne, Nancy Owens Schunke, and Madeline Anderson. The purpose of the group was to give women who were interested in building a less intimidating place to start their journey. We had all been approached at different events by shy women who were excited to see a woman builder. In my case she had waited until I was alone to approach me, she was that shy. We just wanted those quieter female voices to have a place to speak and grow their confidence, until they are ready to tackle the building community themselves. Largely we discuss progress and motivate each other to keep going, but the group is still small.

Tell me about when you first got into Droid building, was there any backlash against a woman wanting to build droids?

Officially I began building in November 2015 starting with BB-8. Since then Ive finished 2 other droids but Im still working on that one. I personally have not experienced any real backlash as my local droid builders are an incredibly supportive group of people and I wasnt the first woman to break ground here. However, outside of the building community I do struggle a bit with how invisible I feel. I have been asked Did your husband make that for you? and have been completely ignored in favor of speaking to the male droid builder next to me. I think we need to change this misperception that women cant do things like this.

Between this series and the upcoming "Looking for Leia", you'll have achieved a bit of celebrity status within the community. Tell me how that must feel?

That made me giggle a little because I dont feel like a celebrity. Im really excited to share my passion for my favorite hobby and to hopefully inspire others, no matter who they are, to pursue their own passions even if they think its too hard. We only learn through growth and its easy for us stagnate as adults. I especially hope to inspire other POC to let their geek flags fly if they have them.

What has changed the most that youve seen over the years since you started building?

Confidence and skill level. When I first started I knew nothing. I didnt know anything about electronics or soldering and I was very concerned with electrocuting myself or starting a fire. Honestly, I didnt even know how to paint with spray paint cans properly. Through this experience I have learned to program Arduino sketches, Ive learned to read wiring diagrams, operate and maintain several types of 3D printers, how to create my own basic 3D models, how to use more tools than I can count (most of which I keep here in my apartment), and Ive even gotten a handle on the painting thing. Some of the things Ive learned Ive been able to use at work, which make them even more valuable. But largely it makes my world so much bigger and gives me so many more possibilities in life.

I havent been in the community for very long, but I have been in long enough to see the change in interest in 3D printing. When I began and BB-8 had just been introduced there was an uptick in interest in 3D printing as the BB-8 Builders Club members largely used printing to reproduce the parts. As the printers become more affordable and more and people got into it, the desire to use printing as a building method has become popular in all the droid building groups. Theres always some pushback to new methods and this is no exception, but the results with 3D printed droids has been great! Doesnt mean that the older methods of building are disappearing though, but its great to see innovation in the process.

What is your favorite droid and why?

My own of course! I knew I wanted an imperial droid, to take it with me on 501st Legion troops, but when C2-B5 was introduced in promotions before Rogue One came out I fell in love. It was one sleek droid! I love them all though and Ill keep making them until I run out of space to put them.

Bonus question...what is your favorite film and character?

It was Empire Strikes Back for years until Rogue One came out! My favorite character is a toss up between K-2SO and Moroff (and I wish he had had more screen time!) and Moroff is my next big costume project.

If you'd like more information on the Stardust Builders Initiative, go to their Facebook page by clicking HERE.