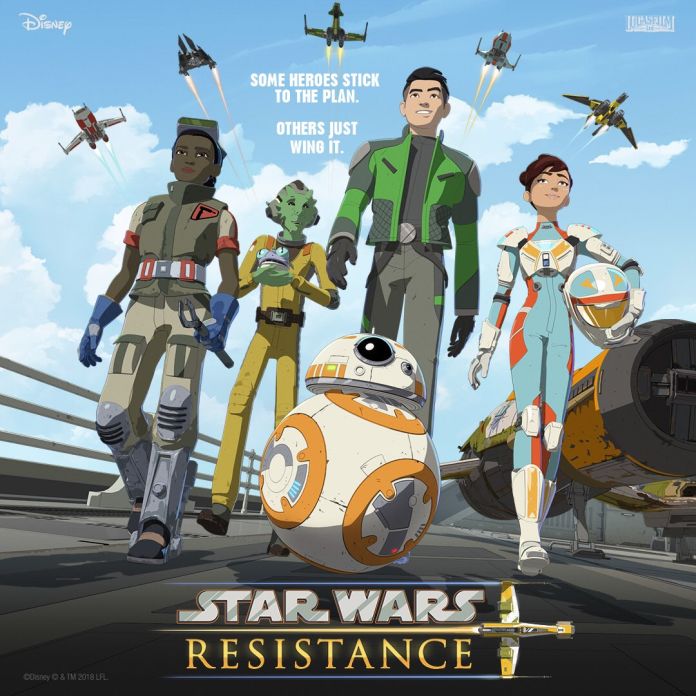 Disney and Lucasfilm have released the first poster for the upcoming animated series Star Wars Resistance and as you can see from the image below, it's really playing into the fun and aerial aspect of the show. It's clear from the get go the characters of Kaz (Christopher Sean), Tam (Suzie McGrath), Neeku (Josh Brener), Torra (Myrna Velasco) and BB-8 will be the main players for the show and should get a lot of screen time.

As we know, the series was created by Dave Filoni who found inspiration for the show from his love of WWII aircraft...

The idea for Star Wars Resistance came out of my interest in World War II aircraft and fighter pilots said Filoni. My grandfather was a pilot and my uncle flew and restored planes, so thats been a big influence on me. Theres a long history of high-speed racing in Star Wars, and I think weve captured that sense of excitement in an anime-inspired style, which is something the entire team has been wanting to do for a long time.

Along with the above mentioned, the rest of the cast includes Oscar Isaac, Gwendoline Christie, Scott Lawrence, Donald Faison, Bobby Moynihan, Jim Rash and Rachel Butera as General Leia Organa!

Here's the official description for the premiere episode titled, "The Recruit"...

In the one-hour premiere The Recruit, Poe and BB-8 assign Kaz to the Colossus, where he meets a cast of colorful new aliens, droids and creatures. While undercover to spy on the growing threat of the First Order, Kaz works as a mechanic and lives with Poes old friend Yeager  a veteran pilot who operates a starship repair shop run by his crew: Tam, Neeku and a battered old astromech called Bucket.

Be sure to check back here for all the latest info, in the meantime, here's the latest trailer!