With Star Wars Resistance officially listed as In Production it shouldnt be long now before details start to emerge about character descriptions, locations and potential story points.

What little information we do have, came to us from this statement that was released by Lucasfilm last week

"Star Wars Resistance," an exciting new animated adventure series about Kazuda Xiono, a young pilot recruited by the Resistance and tasked with a top-secret mission to spy on the growing threat of the First Order.

So, not much to go on there but as the weeks and months pass, more information will slowly drip out. But rest assured the powers that be at Lucasflim and Disney will be doing their absolute best to keep things as quiet as possible before the fall premiere.

Another important part of the press release was a cast list that featured some names that are most certainly familiar to any Star Wars fan and some names perhaps not so much. First off, we know everyones favorite droid BB-8 will be in the mix, but were also going to get Resistance pilot Commander Poe Dameron and First Order baddie Captain Phasma. They will be voiced by their big screen players, Oscar Isaac and Gwendoline Christie respectively. Those are two very big names that should help this series reach the greater Star Wars audience that may still be timid when it comes to the animation side of things. As popular as The Clone Wars and Star Wars Rebels was, there were still legions of Star Wars fans who dismissed them as too childish. These inclusions should at the very least get some of those standoffish types to watch the premiere episodes.

Although not confirmed yet, there are reports the lead character, Kazuda Xiono, will be voiced by actor Christopher Sean. Sean is mostly known for his work on the primetime television series Hawaii Five-O and the daytime soap, The Days of Our Lives. While he has no voice-over or animation experience, the tone and tenor of his voice seems well suited for this kind of work and listening to him already paints a clear picture for me about how they plan to present Kazuda to us. Should they go in that direction.

The rest of the main cast has some names which should ring a bell if youve been a consumer of television over the last 10-15 years. There are some Star Wars alumni in the mix with Donald Faison (Scrubs) and Scott Lawrence (Legion), both of which have toiled in Star Wars voice work previously. Faison, did some voice work on the ill-fated Star Wars Detours show that never aired and veteran actor Lawrence has voiced Darth Vader in over 10 different Star Wars video games. But don't get too excited, no one expects him to reprise that role in Resistance for reasons which should be obvious.

Other names you might recognize would be Josh Brener, who has played Nelson Bighetti in all six seasons of the hit show Silicon Valley, and Jim Rash who played the popular character Dean Pelton on the hit comedy Community. Both have a unique tenor to their voices and have worked on animated shows before. Some astute Star Wars Rebels fans will recognize Brener as the voice of Erskin Semaj, Mon Mothmas aide in two episodes of the recently expired show. Saturday Night Live long-time player Bobby Moynihan rounds out the male leads and has lent his voice to several projects including DuckTales, which he does currently, and the feature length smash hit Inside Out, where he played the role of Forgetter Bobby.

On the ladies side weve got three talented women who are lesser known in North America, but not for much longer. British actor Suzie McGrath is a relative newcomer who you might now from the British Television show East Enders where she played Keisha for five episodes. Myrna Velasco, who provides the voice of Rita Delgado on the popular animated show Elena of Avalor, has been in the business for only six years but has already provided voice work for a few different shows. Finally, professional voice actor Rachel Butera has worked on countless animated shows already in her relatively short career and might be most well-known for providing the voice of Meryl Streep in the hit show Family Guy. 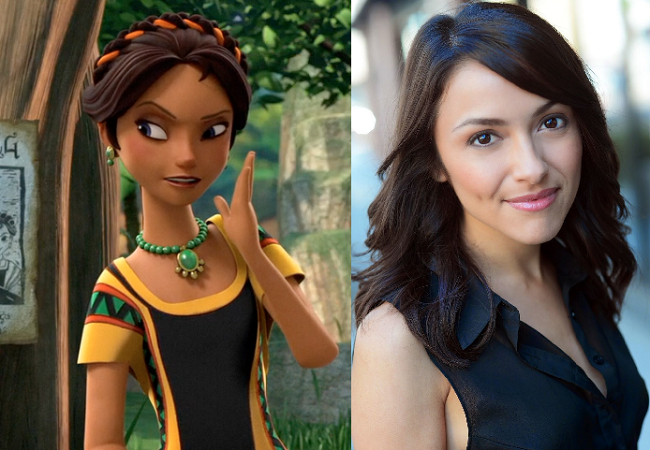 This is quite a diverse cast which will most definitely be reflected on screen Im sure as the sometimes rag-tag Resistance finds itself being a mostly inclusive group, much like the Rebellion was. This will obviously play opposite to the more nihilistic approach the conscripted First Order uses for their sometimes-xenophobic style of recruitment.

Hopefully soon we get some character names and descriptions to go along with the actor announcements that way we can start to piece together storylines. Theres a rumor we wont be getting any major announcements until this summers San Diego Comic-Con, so we may have to wait a couple of months. But with the top secret mission motif Im sure a fair bit of the time will be spent amongst the First Order rank and file and maybe getting to know some of them on a more personable level. This could be an opportunity to create some real cathartic situations and maybe even create some empathy amongst the First Order ranks. For every General Hux, theres got to be hundreds of regular folks just doing what they think is right, performing less glamourous work such as maintenance, repair technicians and even janitors. There's no reason to think this entire cast is destined for Resistance roles as at least one of them will fill out a First Order uniform I'm sure.

Filoni and company could give us a peek behind the curtain and reveal to us more First Order members that are like John Boyegas Finn character. Rank and file members who have become disenfranchised or disheartened by what they have been ordered to do and are looking for an opportunity to defect. Perhaps history will repeat itself and well get another Agent Kallus type character who was very popular amongst Rebels fans.

No matter the plot, there seems to be plenty of experience and talent in this diverse group of actors and are likely up to the task of delivering a great show. The half dozen or so years prior to The Force Awakens is a target rich environment when it comes to story threads so Filoni and the writers should have a field day with exposition. And by creating new characters with new voice actors the possibilities are nearly endless.

And in much the same way Rebels played out, we roughly know how, when and where the Resistance series most likely ends up. In a small village named Tuanul, on the desert planet Jakku, with Lor San Tekka handing Poe Dameron a map to the location of Jedi Master Luke Skywalker