We who can see the stars every night glance up casually at the cosmos and then quickly down again.

Sixteen long years fans waited for new Star Wars stories to grace the screen. Then word got out that George Lucas was ready to bring Star Wars back to the big screen and directing again no less. The anticipation as you would expect was palpable to say the least. What they got, what we all got, was Star Wars Episode I: The Phantom Menace.

There are two types of moviegoers generally. Those who are looking for a deeper meaning and a representation of the human condition and those who believe films are pure entertainment, to be looked at and not listened to. The final product of The Phantom Menace is surface level entertainment with no more political awareness than the kids Lucas claims are his target audience.

The quote at the start is from the Isaac Asimov short story Nightfall and speaks of losing that wonder and disbelief in something, as it simply becomes mundane. It's been used before to describe cinemagoers muted reaction to film special effects which have progressed exponentially, especially in the 1990's. Star Wars, which used to be a technological marvel, was by all accounts in 1999 nothing new anymore. When The Phantom Menace was released we had already experienced at least a decade of wizardry on screen with films such as Terminator 2: Judgement Day, Jurassic Park and Independence Day. The very technology Lucas and ILM had created was making miracles happen on a regular basis and by Episode I, fans werent so easy to please anymore. Yes, Lucas would become a victim of his own high standards.

And for a film that was apparently meant for 12-year-olds, I can't understand why the political details had to be so tedious and abstract. Did Lucas actually think the kids in the audience would be titillated by trade wars and the spectacle of a stagnant Senate? And if the solution to counter balance this political gravity was the inclusion of Jar Jar Binks then, I dont know what to tell you. Granted its peacetime and they had to come up with something tangible to create drama and conflict, but unfortunately, they failed on both accounts.

To abridge the plot as simply a trade dispute kind of misses the point, especially in hindsight. It plays backdrop or second fiddle to the tale of Anakin Skywalker and his eventual transformation into the ominous and evil Darth Vader. There are plenty of wonderful ancillary stories the franchise embarks on, which provide commentary on the current geo-political state of the galaxy and while we do get a wonderful mini-revolt on Naboo and hints of the Republics demise, its all about two characters really. Anakin Skywalker and Sheev Palpatine and how their individual paths would come together to become the most feared Sith duo ever.

As it exists, in a vacuum, the story in The Phantom Menace is just about the worst thing you could imagine. Lucky for us, it doesnt exist in a vacuum. Theres context there and through patience and learning we were rewarded, its just that it took two more films and six years for that to happen. Thats why I refer to Revenge of the Sith as the great redeemer. For it completely salvaged the trilogy and ended in such a fantastic and stunning manner I was more than willing to forgive the sins of Episode I and II.

Alone though, for every sin The Phantom Menace commits, it also does provide us with reassurance that the Star Wars we know and love still exists, albeit sparsely. There is value to be found in this film, its just not always necessarily from the lead characters or the story threads within. While yes its true that Lucas gave us Jar Jar Binks, the most maligned and hated Star Wars character ever conceived, he also in the very same movie gave us the Dathomirian Sith, Darth Maul.

Ill try to remain unbiased as he is my favorite Star Wars character of all time but for me, and I think many others, Maul is the standout character of this film. The spectacular encounter between Darth Maul, Qui-Gon Jinn and Obi-Wan Kenobi at the end is the highlight of the film as John Williams exquisite score, Duel of the Fates takes hold. Up to that point its clearly the greatest lightsaber battle on screen. It's beautifully choreographed, well executed and Ray Park's performance is flawless. And the cherry on the cake is that John Williams' musical score is brilliantly evocative and fits the action perfectly. So much that by the time we get to the deaths of Qui-Gon and Maul, we are heavily invested in these three and in such a short period of time, its quite alarming.

But there are other things to point to for positive vibes and a general Star Wars fix. Perhaps not always successfully, The Phantom Menace did give us a ton of first looks at existing Star Wars characters, and brand new ones as well. Other than the already mentioned leads we finally got to see representations on screen of Padme Amidala, Shmi Skywalker, Captain Panaka and most of the Jedi Council including Mace Windu, Ki-Adi-Mundi, Plo Koon and Adi Gallia.

Additionally Lucas, always the gearhead, does supply us with some amazing new and retro style freighters, trade ships and racers. The pod racers and the race itself are thrilling no doubt although the stakes in play are kind of ridiculous. The Queens Royal Starship and the N-1 Starfighter are fantastic new concepts and designs, which complement Naboo itself which looks quite right and attuned to the Star Wars motif. Even Maul's speeder, the Razalon FC-20 aka "Bloodfin" was super cool to look at.

There are just too many unsympathetic characters piled on top of each other and looking for inspiration from the leads is like struggling to find an actual set piece amongst the CGI slurry. We were forced to sit through the ridiculous underwater sequence involving the Gungans which came across as murky and monochromatic, to the point where all of the finer details were lost. Dont get me started on Boss Nass and the negotiation scene. 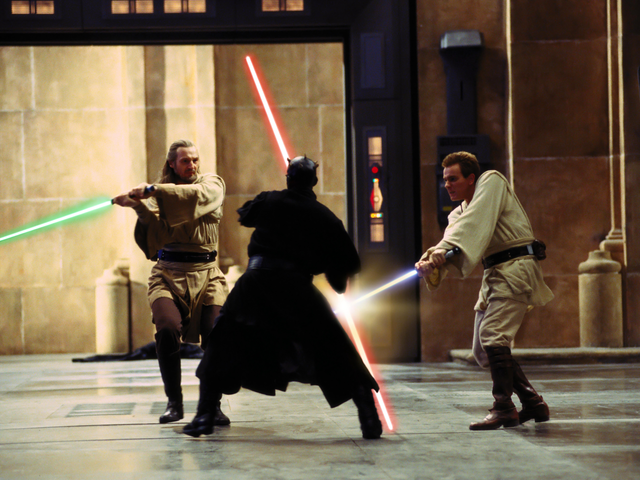 Whats oddly fascinating is that each of the characters becomes much more interesting as time permits, both within the timeframe of this film, and the series. Its when these characters are expected to deliver complex discourse is when the film runs into trouble. Too often an inexperienced Jake Lloyd or a disinterested Liam Neeson are forced to speak a Star Wars language they just dont seem to get. The standout performers, which would remain consistent, are Ewan McGregors young take on Obi-Wan Kenobi and Ian McDiarmids Sheev Palpatine, both holding their own and providing the films only real enthusiasm and vigor. Even Yoda was confusing at times, and I dont mean his usual OSV sentence structure, if you could get past his poor design.

The character introductions are fumbled to a degree although part of that may because we already know them and how their lives turn out. Sometimes knowing the fate of someone softens the impact of their birth. But I suspect it has more to do with the writing than anything else. Indeed, Star Wars does feel gutted to a certain degree but if you pick the meat off the bone what are you left with? A good start that didnt live up the near impossible highs set by Lucas himself way back in 1977.

If theres a victory to be found it seems by just simply existing The Phantom Menace succeeds despite a lack of enchantment, wonder and thrills. I cant imagine what a successful Star Wars film wouldve looked like in 1999, if it was even possible, but in a franchise that will always be a film-first one, this entry was more about a sign of the times than anything else.

Nevertheless, if not for the amazing final sequence featuring Qui-Gon Jinn, Obi-Wan Kenobi and Darth Maul and a not totally wasted revolt on Naboo, this film would have sunk under its own weighty goals. This epsiode, much like the two that followed it, saved the best for last and ends on an intriguing note that while you may have been disappointed throughout, leaves you with slightly more hope than fear. A theme that would similarly be echoed in Episodes II and II as well.

I know this film finds itself at the bottom or very bottom of many lists, perhaps deservedly so, but Im not entirely convinced its the train wreck we thought it was at the time. Thats how I feel anyways, that is until I remember those damn midi-chlorians!