With the end of May fast approaching, opening weekend projections are starting to roll in for Solo: A Star Wars Story when it gets released on May 25th.

The website Box Office Pro, which tracks box office numbers and projects opening weekends, has the second standalone Star Wars film opening in the $150 million range with a domestic total haul somewhere around the $390 million mark. Similarly, Rogue One in 2016 opened to $155 million and would go on to earn $532 million in North America based on excellent reviews and a strong word of mouth. These projections for Solo obviously fall short of those numbers as people's expectations, with good reason, are being kept in check. Its worth noting that this is the first time since 2005's Revenge of the Sith that a Star Wars film opened in May, and that day will also mark the 41st anniversary of the release of Episode IV: A New Hope.

With all the behind the scenes drama, including a late director change from Chris Miller and Phil Lord to legendary filmmaker Ron Howard, many wondered if that would affect the box office numbers for this film. To be frank, it's a also a film no one was really asking for in the first place as fans, for the most part, have been asking for original Star Wars material instead of rehashing original trilogy characters. But Star Wars has always defied the odds when it comes to making money either at the box office or with ancillary products and the after market, and this edition should be no different even though the narrative is entirely predictable. 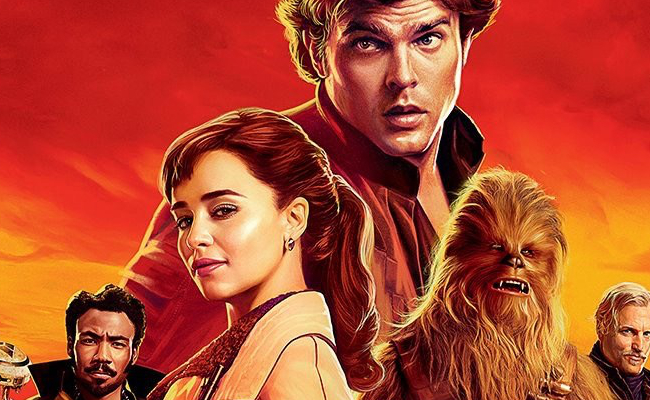 Despite the obvious advantages of opening on a long weekend, Memorial Day in this case, the schedule isn't exactly a friendly one to the Han Solo biopic. With Avengers: Infinity War opening 4 weeks prior, Deadpool 2 one week prior and The Incredibles 2 debuting 4 weeks after, it is indeed a busy summer season and Solo is right in the thick of it. While The Avengers and The Incredibles shouldn't worry Star Wars execs, Deadpool 2 definitely should as it looks to open above $100 million. If the sequel to the 2016 surprise Marvel hit garners the same reaction as its predecessor, Solo could be in a bit of trouble when it opens a week later.

We also have to factor in the close proximity to The Last Jedi's release which just left theaters not long ago and was met with mixed reactions from the fans while critics gave it high praise. Has there been enough of a cooling off period for Star Wars fans who are perhaps feeling a little franchise fatigue? With Episode IX not being released until December 2019, it's a long time between films so fans that choose to skip this one will have to wait, which in itself could be a reason for a high turnout.

The Star Wars franchise, for the first time since The Force Awakens, finds itself in the precarious position of not having itself as the only competition. That coupled with not overly enthusiastic reactions to the trailers could spell a lower than expected take come Memorial Day. Has Ron Howard settled enough nerves and convinced people that the troubles on set were all worth it? Time will tell.

For the full article at Box Office Pro, click HERE.