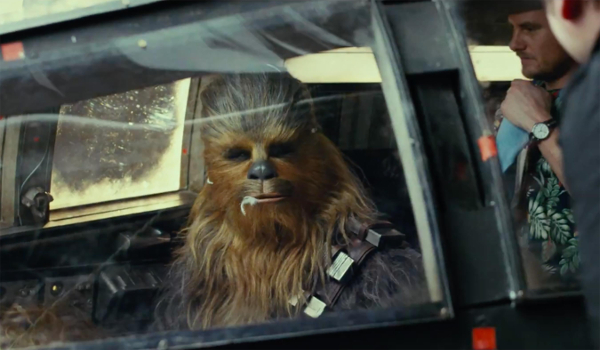 Dennis Pellegrom runs StarWarsInterviews.com and has over one hundred Star Wars interviews under his belt and posted for your reading pleasure. His most recent is with Joonas Suotamo a former Basketball star from Finland, who now portrays Chewbacca in the new Star Wars films. Here's is a brief snippet - read the full story here.

SWI: How did a basketball player from Finland become a Wookiee in a Galaxy Far Far Away?

I was made aware of the casting process and the fact they were looking for someone to play Chewbacca by a Facebook post. At the time I didnt think I would get it. But time went by and three months later they called me because they had learned through the basketball association of Finland that I was tall, had blue eyes and they became interested and that is how it happened. I had to audition then and got the part.

SWI: When was your first encounter with the Star Wars saga?

That was a VHS tape back in the nineties or maybe even earlier I was very young.

SWI: What did you think of the movies?

I loved it. I thought it was an essential thing, I took it for granted. I mean, in the sense that it was in my world. It was there before I was born. I appreciated and respected it and I think that paid off in the end.

SWI: What did you think of Chewbacca?

Chewbacca was that tall hairy guy walking behind everybody in the scenes. I must say I wanted to be Luke Skywalker when I was little because of my blonde hair. But then when I got taller than almost everybody by 2 feet I realized I couldnt be Luke Skywalker basically.

You were destined to play Chewbacca.

Exactly. But all of that came much later.

SWI: You worked with Peter Mayhew on two movies. What advice or instructions did he gave you regarding playing Chewbacca and taking over the role.

He said dont be so skinny. I was very skinny (laughs). So that was a good advice. He also told me how he approaches playing Chewie and what he pays attention to in situations and interesting stuff like that. That was really helpful and confirming my own assumptions that I made by watching him work so it was very good to meet him before we started filming

SWI: In The Force Awakens most of Chewbaccas scenes had Harrison Ford as Han Solo in it as well. How was it to work with such a famous well-known actor?

A little bit scary at first but once you got to work with him more you realize he just wants to do his best like we all do and it was very easy to focus on the work when he was around because he is such a professional. He just comes on set, leaves his life behind him in the trailer and wants to do the scene. Its a straight to business kind of approach which I like when were making films.

SWI: The most iconic scene of The Force Awakens is the one where Solo and Chewbacca enter the Falcon. I believe that was you and not Peter Mayhew in the suit, right?

SWI: I can tell because of your eyes. Chewbaccas eyes in that scene are yours. What do you think of the enormous positive reactions this scene received from the fans when it appeared in the trailer?

I was watching the reaction videos of people watching that trailer and it was insane to see how people reacted. Half of it was seeing Harrison Ford and the other half was seeing Chewie.

SWI: You couldnt tell anyone back then it was you in the suit. Was that frustrating?

I learned to accept it you know. I cant really tell about who played Chewbacca in which scene. I mean, I could, but its out of respect for Peter and I dont want to get into it. I am still grateful I got to be a part of all this.