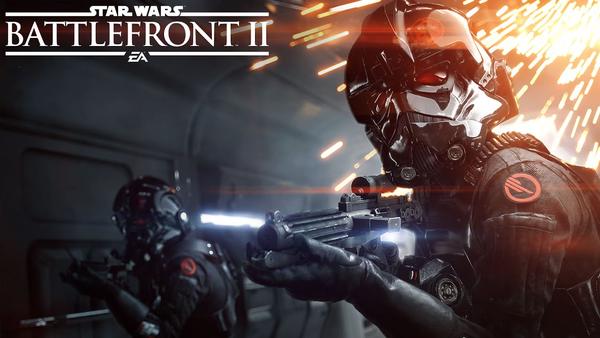 A week and a half ago, I was invited by Electronic Arts, to participate in their Star Wars: Battlefront II event out at their Redwood City offices. I had never been invited to one of these types of events before, so I wasn't sure what to expect. What I did know was that EA was going to cover my trip, I was going to get time to play the game, and there was an In 'N' Out Burger within walking distance from the hotel. I was all in!

For those that don't know, the EA Campus is comprised of four buildings about 20 miles from San Francisco. Their headquarters is home to their executive team, managers and testing facilities. Besides games in the Star Wars franchise, EA also has a very popular line of sports games, that includes the Madden Football, and FIFA Soccer series, as well as The Sims, Titanfall, and Plants vs Zombies.

At the start of this two-day event, all the participants gathered in the lobby of the hotel to head over to the gaming facility. I wasn't sure who else would be joining me for this adventure. It turns out it was a majority of gamers with YouTube channels including: Hello Greedo, Star Wars Explained, Dash Star & Star Wars HQ. This was to be a video capture event for these channels, and I was the only one from a traditional fan website.

Day one started with an introduction to the game, which is pretty much the information that can be gleaned from the EA Star Wars Battlefront website, and something that most of the invitees already knew. That was followed by an intense deep dive into the single-player campaign, which is new to this version of the game. We closed out the day by trying out the other single player mode  Arcade, followed by the new mode, Strike, the newly redesigned Starfighter Assault & the renamed Walker Assault mode, now called Galactic Assault!

Day two allowed us time to finish up playing the remaining Multiplayer modes which included Blast, more Starfighter Assault, Heroes vs. Villains, and some more levels on Galactic Assault. Throughout the day, there was also time to revisit some of the single-player modes, explore the menus and chat with the project team about the game.

There are two things you should know about me: I don't consider myself a gamer, and I was an early adopter of the 2015 Star Wars: Battlefront game. I purchased the downloadable content (DLC), played in my free time and leveled my player up with the online multiplayer mode. I also have owned and played all the Star Wars console games since Shadows of the Empire on N64. I've got all my systems on my shelf to prove it as well! But seriously, I'm not a gamer! I'm just a huge Star Wars fan, and what better way to explore the worlds of Star Wars, except through video games.

One of the things my sons and I loved about the original Battlefront II (2005) was the Campaign Mode. It's something that I thought was lacking on the latest Battlefront (2015). Playing online with hundreds of advanced gamers can get frustrating. And the only "offline" modes offered by the 2015 edition were sorely lacking in fun or adventure.

Now, you can play as Iden Versio, a female member of Inferno Squad, an elite Imperial commando squad. You might first want to familiarize yourself with their adventures in Christie Golden's novel: Star Wars: Battlefront II  Inferno Squad, which tells of the creation and first missions of the team. The gameplay starts towards the end of Return of the Jedi, as the squad witnesses the destruction of Death Star II on Endor. From there we follow mostly Iden, through a series of adventures.

Without giving too much away, the Campaign Mode is a well thought out story, that allows you to practice the gameplay you will need to master for online performance, while giving you basically a new mini Star Wars movie. The levels alter from standard first-person shooter action, to fighter combat, to playing as a number of "heroes," the generic term for movie characters, be them from the light side or the dark. This feels a lot like 2005's Battlefront II, but much more in depth.

I was only able to complete about 60% of the Campaign. I was very wrapped up in the story, and didn't skip any of the cut scenes. Plus, some of the levels are a little difficult and I had to repeat them, having died about 10% from the end point! This feature alone, would be worth the price for the game!

Maybe you're not into the long form campaign story, and just want to hop into instant action, kill a bunch of Stormtroopers (or Rebels, Battle Droids, Clones, etc), and explore the maps. Arcade mode provides that.

Hands down, the mode that most players will gravitate to (if you have an online EA account) will be the Multiplayer mode. This is the bread and butter for the game, and the one that has, so far, elicited the most divisiveness on the game.

This mode is divided into five games that you can choose to play. Gone are the days of picking an environment, and cycling thru the game modes, or choosing a mode and getting placed on a specific map. The maps, at this time, will cycle thru for each game mode. From my experience in the limited environment, the on-screen updates as to the number of players being waited on and the countdown to entering the battle are greatly improved over the previous version.

Maps included in multiplayer mode include Tatooine, Hoth, Naboo, Kamino, Yavin 4, Takodana, Starkiller Base, Unknown Regions, Death Star II, Kashyyyk, & Jakku. Some maps are exclusive to certain game modes, but many, like the 2015 version, have multiple sections for different modes, as well as a night-time vs day-time setting.

The biggest change for Multiplayer, however, is you no longer play as "your character," leveling up as you play. There are now four classes (Assault, Heavy, Officer, & Specialist), each with their own series of default usable weapons and traits. Each class can be leveled up separately and or not at all depending on your playing styles. Each class does have it's uses in various game modes: Assault being the standard infantry characters, while Heavy make use of characters with rapid fire and mini-gun weapons. The Officers are harder to kill and have the ability to place gun turrets around the level (and now detonate them on command, injuring enemy players) while the Specialist have reign over the sniper and long range rifles.

Playing levels in this mode will earn players Credits, the in-game currency. Credits can be used to purchase upgraded weapons, trait and other specialty cards for each class. Players can also purchase Hero characters to unlock for use within the levels themselves. Should you want to bypass playing for credits (maybe you're not that good), you can spend real-world monies to buy in-game Crystals. These micro-transactions will allow you to purchase and unlock abilities, heroes and traits. But be warned some of the newly purchased items might not be available until your Class has reached a certain level.

Finally players have the ability to find, win or purchase Loot Crates, which are in-game caches of traits and weapon upgrades. Some can be found by playing through the Campaign levels, or completing certain daily challenges. There will always be a free daily Loot Crate to unlock as well. You can also receive Crafting Parts which allow players to upgrade traits and abilities along with Credits.

Anyway you look at this, being a "completist" will cost you a lot of time, money and frustration. But the abilities provided will allow for over 1,000 combinations of character classes, allowing a very diverse, and customized playing experience.

Star Wars: Battlefront II feels like an entirely redesigned game, and a worthy successor to Star Wars: Battlefront. The campaign mode alone is worth the price of the game, and there's plenty here for everyone. While I won't miss the Cargo, Drop Zone, or Droid Run multiplayer modes from the 2015 game, I'm hoping there's an Extraction or Infiltration level built into the Strike mode.

Many thanks to EA for taking the time to put together this preview event. It definitely took my excitement for this game from average to strong!

If you're playing on the Xbox platform look for me as user: RealJovialJay, and I'll see you on the Battlefront!