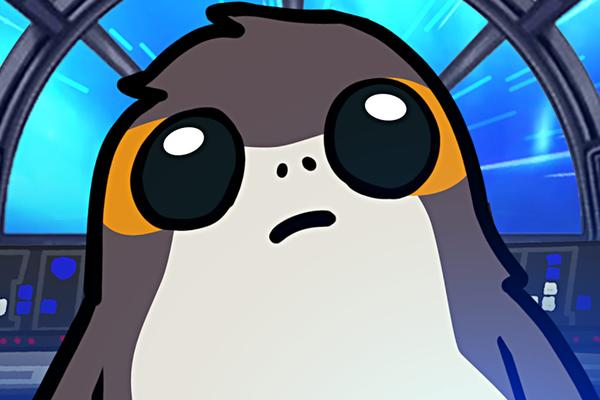 Here's a great piece by Alex Kane about the fun and addicting online game "Porg Invasion"!

INSIDE PORG INVASION, THE MOST ADORABLE FACEBOOK GAME IN THE GALAXY

I really feel like I was born to make this game, says Hana Lee, senior producer on Star Wars: The Last Jedi  Porg Invasion. In fact, she adds, I was actually born on May the Fourth, Star Wars Day.

When Lee and her team first saw behind-the-scenes footage of a porg on StarWars.com, she knew the creatures were the perfect fit for a fun, standalone Facebook game. It goes without saying that porgs are just really adorable, she says. And even months before the movie came out, you could see porgs everywhere, on mugs and T-shirts and stuffed animals, so it was pretty natural for us to say, Hey, why dont we bring the porgs to life in a video-game format? And our leadership was so open and great in supporting us and saying, Yeah, you know what? Have fun with it! In about nine weeks, the team went from concepting the game and drawing up a design document to testing and polishing the finished product. It was a very fun and exciting process.

Lee and the rest of the Porg Invasion team at DCPI devised the games core concepts, locked in their design doc, and then collaborated with developer HitPoint Studios to get the project delivered on time. They also worked closely with Lucasfilms Douglas Reilly, who served as executive producer on the game and provided valuable feedback regularly throughout the process.

Because of the production timeline  the game launched on December 15 alongside The Last Jedi  much of the initial design work for Porg Invasion had to be done in a single day. Were all old Atari-type gamers, and we just love the classic arcade style. So we said, You know what? Itd be fun, and also not intimidating for casual gamers, to introduce what we called whack-a-porg-style game. Players manage their time between BB-8 and Chewbacca, and all the while try to whack the porgs [with BB-8s Grabber Claw ability]. (As seen in the Star Wars Blips short, Stowaway.)

Most of the games action centers around Chewie trying to repair the Millennium Falcon and make the jump to hyperspace; the porgs keep getting in his way, so it falls to BB-8 to wrangle them up. Using simple touchscreen controls, players command both the droid and the Wookiee. We love both casual and hardcore games, Lee says, but one thing that we really wanted to do was to make it a time-based game, kind of like Diner Dash married to whack-a-mole. One of the challenges that arose from this inspired scenario, however, was keeping the porgs likable despite being the players main nuisance.

Without access to the completed film, Lee and the rest of the team turned to other The Last Jedi media, like the childrens book Chewie and the Porgs, to gain a deeper understanding of the galaxys newest critters. We just took a piece from everything that was available, and tried to crack the porgs personality that way. The whole dynamic between them in the book is that Chewies clearly taking care of the porgs, and theyre hanging out, but the porgs can also be a bit of a menace [Laughs].

The primary goal for Porg Invasion, Lee says, was to make a game that anyone could easily pick up and play, for any length of time  at home, on the subway  on any device. But its also got a built-in competitive component, as well. Theres two modes, she says. One is single-player, and you can get the high score, share that, and then invite your friends to challenge and beat you. The second is labeled multiplayer, but its a team challenge, where you can challenge a group of friends, and whoever scores the highest will be assigned the rank of captain, or lieutenant, depending on how you perform. You can make it really interactive with friends by forming a group and competing against each other  in as big or small a group as you want.

Porg Invasion is the first Star Wars game her team at DCPI has worked on, but Lee hopes it wont be the last. The team recently released Disney Magic Timer, an app for kids that incentivizes proper tooth-brushing habits by keeping them company with an augmented-reality version of BB-8.

We have a plethora of porg puns among our core team, and after a while I think we went a little porg-crazy. Were big porg fans, so what happened was, little by little, we started accumulating porg merchandise. In our office, we have stuffed animals, mugs, pencil toppers, all these random things we started collecting along the way. Weve become sort of porg adopters. I feel like, in those nine weeks, we went through our own little battle together and survived, and now we have a beautiful and fun game to show for it, so were very happy, she says. The reception has been really overwhelming. The audience that we were targeting has shown us so much love.

When she finally saw The Last Jedi in theaters, Lee found a new level of appreciation for the porgs. I really liked that the porgs were a reprieve from all the serious stuff thats going on, she says. And porgs themselves represent such innocence  the goodness and whimsy of life. Although they are not a big part of the film, I think that they serve the purpose of reminding us of what life is about: theres fun to be had, and maybe its not so serious, after all.

Star Wars: The Last Jedi  Porg Invasion is available now to play for free exclusively via the Instant Games platform for Messenger and Facebook News Feed.

Alex Kane is a journalist based in west-central Illinois. He has written for Glixel, Kill Screen, Polygon, the website of Rolling Stone, and other publications. Follow him on Twitter at @alexjkane.