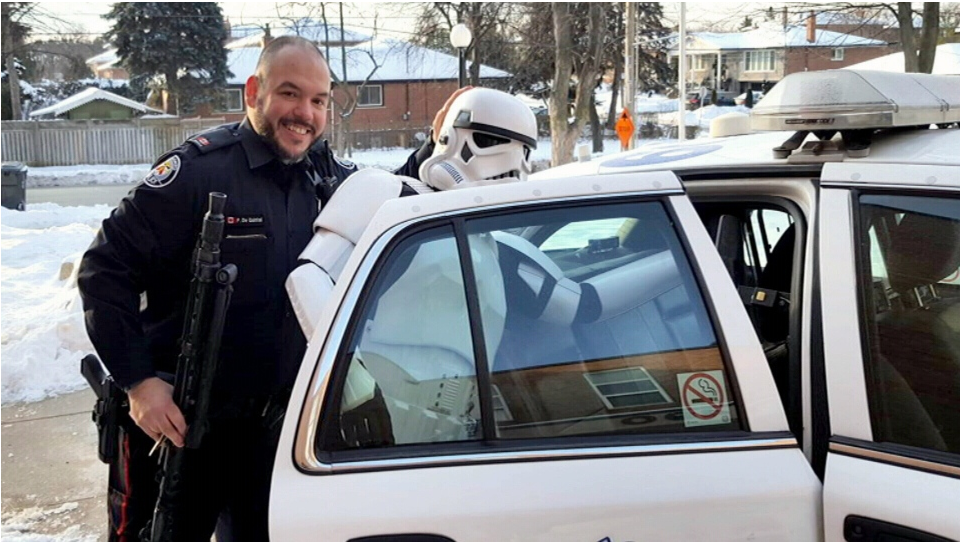 Law and order as a theme, is something that is explored extensively in the Star Wars galaxy. Right and wrong, justice, rule of law, these are all things that have implored many to commit heinous and/or righteous acts in the name of restoring their version of peace and order to the galaxy.

With any ruling body the enforcement of such laws, whether considered ethical or not, is the job of the governments assigned police force. That service can take many forms, Jedi, Stormtrooper, Coruscant Security Force. But whatever the outfit, the name of the game is to protect, serve and enforce.

So, it should be no surprise that the like most things in Star Wars, fans have found ways to turn this aspect of their favorite franchise into a passion. The 501st Legion being the most prolific example but one fan in Toronto, Canada has found a way to combine his love of Star Wars with his desire to help children.

They call him the Star Wars Cop, and Constable Peter De Quintal has found a unique way to help his community in the best way he knows how. As a father himself, De Quintal believes in the importance of helping kids and that that altruism can help shape future leaders in his community. And if he happens to usher in a new generation of Star Wars fans in the process, then so be it!

As a community liaison with the Toronto Police Force, Peter uses Star Wars to engage with kids during his breakfast programs at 29 different elementary schools. He takes a lot of pride in his uniform and wants to show kids the importance of supporting and respecting one another and staying focused on the positive. He firmly believes that being involved in the community can be effective when rooting out gun and gang violence at an early age.

We could be looking at future Lucasfilm employees and Droid builders as well as Peter is also a facilitator of the "Kids, Cops and Computers" program where the kids learn valuable online literacy and computer skills. One of those skills will be learning how to code by incorporating a certain R2 unit!

He is of course a strong presence on social media, inducing Twitter, where he is officially known as the "Star Wars Cop" and routinely posts pictures and updates highlighting the great work he's doing across the city. You'll even see the occasional cosplay picture where Peter gets to wear a different uniform, the Sith Lord himself, Darth Vader!

I reached out to a very busy Peter and was able to ask him a few questions...enjoy!

It's finally happening. 2019 is nearly upon us and change is coming. #DarthVader #StarWars #HappyNewYear pic.twitter.com/mTrHK1tHhy

Tell me about your personal history with Star Wars.

I grew up with 2 older siblings that were both really big into Star Wars when it came out, and we had many of the excellent Kenner toys at the time when I was really young. Unfortunately, as we got older our mother ended up throwing them out!

Like most folks, I can remember the excitement over the release of the prequels and the feeling of them not living up to what I personally had hoped for. In high school, the thrill of going with my friends to watch the original trilogy re-released in theatres, and just loving seeing it on the big screen was something Ill never forget.

What do you love most about Star Wars? What's your fondest Star Wars memory?

Mainly, its the battle of good versus evil and that even when you fall to the dark side, there lays this potential to come back from it, to see the light. To never give up on hope is something that I carry with me.

My fondest memory from the films was the sequence in Return of the Jedi where Leia came to release Han from the carbonite, but was caught by Jabba in his palace.

Ive seen other people incorporate their love of Star Wars into their philanthropy and charity work. Whats unique about Star Wars that often brings the two together?

I think its the sheer amount of people that love that series combined with the huge amount of everyday use items that Star Wars has. Its so accessible and they can connect to it in everyday life so easily. For example, when I would make breakfast for students at a high school program, I used three different types of Star Wars toasters, a Stormtrooper one, a Darth Vader one and a Death Star one. To make it fun I would play the Death Star theme from the soundtrack and use tongs that looked like Darth Vaders Lightsaber. All these things put you right in that star wars zone and put kids at ease.

Tell me about your programs and how you specifically have fit Star Wars into them?

For three years I did Star Wars themed breakfasts for kids, similar to what I described above. Ive even been fortunate enough to bring out the local garrison of the 501st Legion at times to certain events.

I run a LEGO club in high schools with the building theme being Star Wars vehicles. Currently, Im looking into a potential coding program for the younger ones which will incorporate R2-D2!

How do the kids react when they see Darth Vader or a Stormtrooper come into their classroom?

The students just absolutely love seeing these characters. Everyone has a great time except for my thumb as I take a ton of photos for the kids with their phones!

What type of Star Wars specific feedback have you gotten from the kids?

Not everyone is a Star Wars fan but most are and they love engaging me in conversation about past movies or what will happen in the next one.

Favorite Star Wars item that you own - A Millennium Falcon I bought that really got my collection going.

Thanks Peter and keep up the great work!