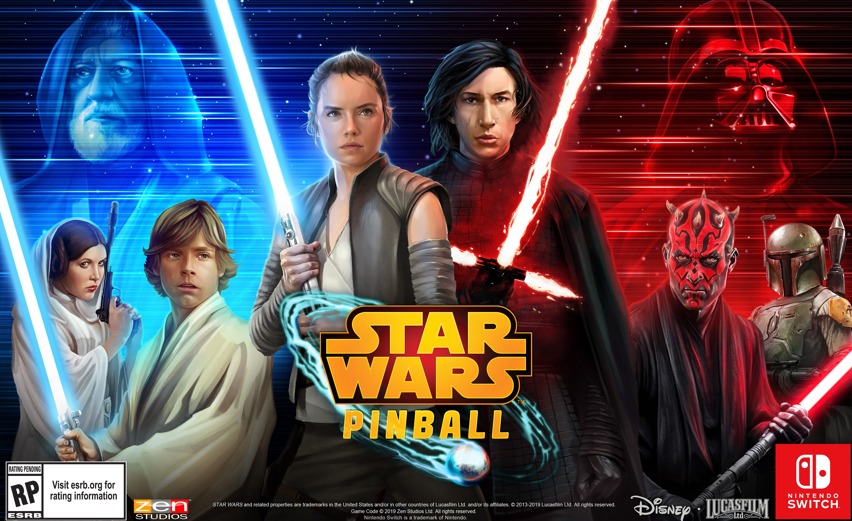 Zen Studios is excited to bring Star Wars to Nintendo Switch gamers for the very first time with Star Wars Pinball. This collection of 19 stellar digital tables includes exclusive Nintendo Switch features and arrives in our galaxy this September, both through the Nintendo eShop and  for the first time ever  as a physical retail product.

19 TABLES CELEBRATING ALL ENDS OF A GALAXY FAR, FAR AWAY

In addition to HD Rumble and vertical play, Star Wars Pinball boasts several features and modes exclusive to Nintendo Switch as a standalone product:
 Galactic Struggle: Every Star Wars Pinball player in the galaxy will choose to follow the light or dark side in a perpetual online digital tug-of-war between the forces of good and evil. What is your destiny?
 Career Mode: Designed with short on-the-go gameplay sessions in mind, this mode challenges you to complete very specific pinball-based missions across all 19 tables.
o Choose the path of the Jedi or the Sith as progress through 50 career ranks.
o Some missions involve mastering awesome Star Wars-themed minigames that might be difficult for some players to access through regular play, such as piloting an X-wing or TIE fighter or fighting Darth Vader in a lightsaber duel.
 Force Powers and Talents: Collect Holocron Shards during missions to unlock Force Powers and Talents that yield special in-game bonuses when activated, such as multipliers, slowing down time and more.
 Cantina Jukebox: Collect the greatest tunes in the galaxy as you play each table. Once youve heard a song, you can listen to it any time you like.

As with past Zen Studios pinball releases, players can challenge anyone in the galaxy through Galactic Tournaments, League Play and, of course, old-fashioned high scores achieved through Single Player mode.