KANSAS CITY, Mo. (March 25, 2015)  Hallmark is doubling up on excitement at this year's Star Wars Celebration with a pair of Hallmark Keepsake Ornaments and a pair of the popular itty bittys® plush collectibles to be available exclusively at the fan event.

The two-packs will be sold in limited quantities each day of the event, scheduled April 16-19 at Anaheim Convention Center in Anaheim, Calif. 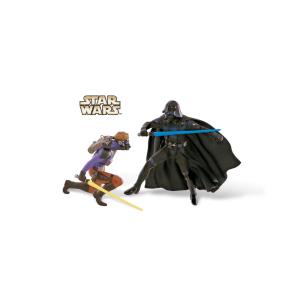 An Epic Vision is the name of the Keepsake Ornament two-pack that features Luke Skywalker and Darth Vader locked in a heated lightsaber duel as inspired by the styling of famed artist Ralph McQuarrie in preproduction art for Star Wars Episode IV: A New Hope. Nearly 40 years since their creation, McQuarrie's original visions for the Star Wars galaxy of characters, craft and planets continues to inspire and delight fans. An Epic Vision has a total production run of 2,000 and sales will be limited to 500 per day ($40 per set). 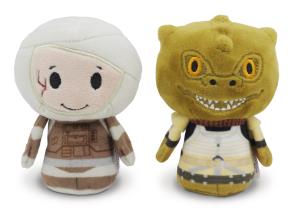 Bossk and Dengar join Hallmark's itty bittys line with a Celebration-exclusive two-pack of the fearsome bounty hunters seen in Star Wars Episode V: The Empire Strikes Back. More than a dozen heroes, villains and creatures of Star Wars are now among the iconic characters of film, comics and television to appear as sweetly and uniquely styled plush itty bittys exclusively in Hallmark Gold Crown® stores and online at Hallmark.com. This bounty hunter two-pack has a total production run of 2,200 and sales will be limited to 550 per day ($20 per set).