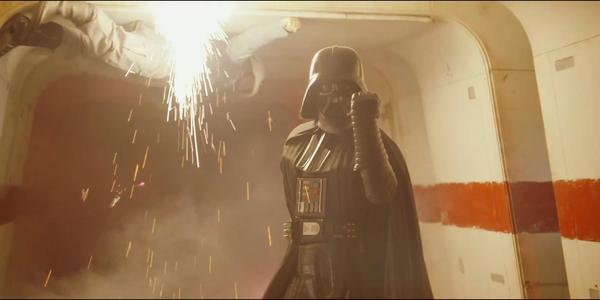 Dennis Pellegrom runs StarWarsInterviews.com and has over one hundred and fifty plus Star Wars interviews under his belt and posted for your reading pleasure. His most recent is with Spencer Wilding, who portrayed Darth Vader in that wicked scene at the end. Here's is a brief snippet - read the full story here.

How did you get cast as the most iconic movie character of all time: Darth Vader?

Well, I felt there was a movement in The Force, but then I realised it was the hot curry from the night before.

I got an audition and it was obviously so secretive. There were rumours Darth Vader might be in Rogue One. I got a call back and I really started to feel it was for the part of Darth Vader. I said to my agent Its definately Darth Vader and he said No, its not. I said Im telling you now Joe, its Darth Vader because every time hes at the end of his line he goes (imitates Darth Vaders breathing).

Seriously, I got a call back and then I did start to feel I was going to get the role. Because Im an open doorway to the presence and spirit of the characters I play. There is a real presence and spirit in Darth Vader, which is unbelievable. He chooses you, you dont choose him.

And how did you prepare for the role?

I wanted to have the exact movements of Darth Vader. So Paul Kasey, who was the movement coach, and me started practising the movements. I was nearly there but he helped me tweaking some things.

Have you met the original Vader, Dave Prowse?

Lots of times. Probably one of the hardest things was when Dave Prowse contacted me on Twitter when the rumours started. He congratulated me on getting the part of Darth Vader. I said Im sorry Dave I didnt get the part. To say that to Darth Vader was pretty hard. I was always true to myself and I would never release anything without the green light. Hes such an iconic character. It felt li there were a lot of tests going on in that year, that they were throwing at me to see if I opened my mouth.

When was your first encounter with the Star Wars saga?

Im a child of 1972, so when the first one came out I was 5 years old and my dad was taking me out to see it. It was great because everyone was raving about it, beause of the spaceships. We got to the cinema and I was like where are the spaceships? We were twenty minutes in the movie and I still hadnt seen any spaceships. My dad wasnt really into it and he took me to see the Pink Panther. Star Wars was an iconic film, really special. And I had a feeling I had something to do with it I could feel it with The Force