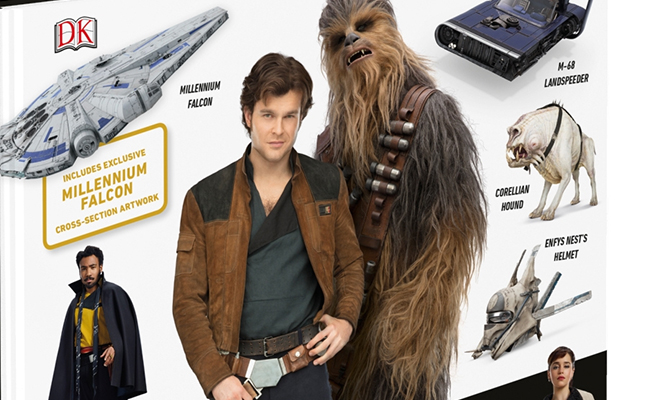 Now that Solo: A Star Wars Story has been out for a month, the chances are that you've all done your bit for the box office. If not, my first question would be "what are you doing with your life?", with the follow-up question being "What are you doing, reading a review of The Official Guide from a movie you've not seen?". I kid of course, but seriously, you should see this movie!

If you haven't seen Solo: A Star Wars Story and you're still reading, I'm not here to convince you otherwise, but be warned; there be spoilers! And if after reading my review, you are persuaded to part with your hard-earned money, then I'll just take that as a bonus.

Following a foreward by Jon Kasdan, and an introduction to the state of the galaxy and a timeline, the contents of the book is laid out in chronological order. Chapter 1, entitled Mean Streets, opens with a look at Corellia and the circumstances in which we find young Han at the beginning of the film. We learn more about Lady Proxima, Moloch and and the scrumrats, as well as the Imperial occupation of the planet and its enlisting of CorSec, a name that is no doubt familiar to Legends' readers.

Trench Warfare is the name of the second chapter, and it begins with a rundown of some of the Imperial personnel that are seen on both Corellia and Mimban, followed by a closer look at the Mimbanese and Mudtroopers, before we are briefly introduced to Beckett and his crew in their Imperial disguises and finally the mighty Chewbacca, aka The Beast!

Chapter 3, The Great Robbery, takes us to Vandor where more details are provided on Beckett, Val & Rio Durant, along with the Conveyex, Coaxium and the cool new addition to the Imperial ranks, the Range Troopers! Closing the chapter, we learn about Enfys Nest and the Cloud-Riders.

The fourth chapter, Place Your Bets, is the largest in the book, detailing characters such as Qi'ra, Lando Calrissian, Dryden Vos, L3-37 and the Millenium Falcon, the latter of which features exclusive cross-section artwork by frequent Star Wars illustrator Richard Chasemore.

Kessel and Savareen are the focus of chapter 5, The Big Score, and among the sections featured in the chapter are the Pyke Gang, Mine Workers and the Droid Workforce, the Kessel Run (finally!) and details about other members of Enfys Nest's Gang, including Weazel and Tubes, both of whom may well be familiar to you, depending on how in-depth your knowledge of The Phantom Menace and Rogue One: A Star Wars Story is.

The final chapter, Going Solo takes us behind the scenes to take a look at concept art for Lando & L3, the Millennium Falcon and Corellia, among other things, with the book being rounded out by an index that includes a photo of Imperial Officers Tag Greenley and Bink Otauna!

Unlike the movie, there is no big reveal, so some surprises will remain until you see the film, that is, assuming you've not already seen it and are still reading this review.

While Solo: A Star Wars Story may not add a great deal to Star Wars lore per se, there is a fair amount of fan service or easter eggs, and The Official Guide follows a similar pattern, as it does also with a few splashes of humor here and there. The likes of Dryden's Study, Party Guests and Lodge Players are where this is most noticeable, and where we also find out a little about the best-named character in the entire Star Wars universe, Therm Scissorpunch!.