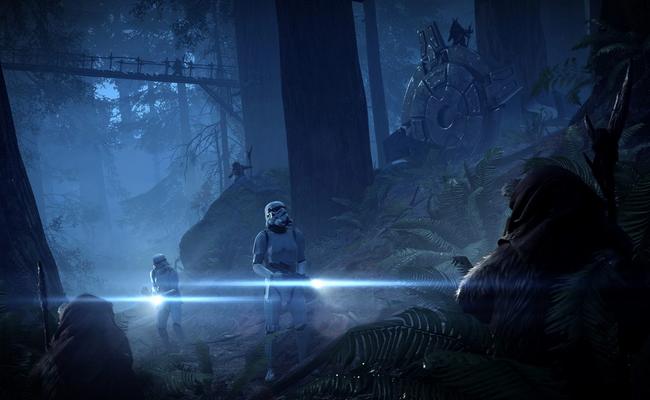 Beneath the evening skies of Endor, the might of the Empire means little to the Ewoks as they fight for control of their home world. In Ewok Hunt*, Star Wars Battlefront IIs exciting new mode, spears and blasters battle for dominance as a squad of stormtroopers are ambushed by a tribe of Ewoks descending from the trees to channel their hidden fury. Available only for a limited time, Ewok Hunt lets you stalk your Imperial enemy under the cover of night, or desperately fight to hold off the pint-sized throngs until you can escape.

The Battle Begins
In the new mode, you start as an Ewok or in a group of stormtroopers. The ambush begins as the Ewok attacks the unsuspecting stormtroopers, using spears, Wisties, and whatever abilities they can muster to take down the intruders. Each stormtrooper defeated spawns as another Ewok. If the Empires forces have been completely eliminated, the Ewoks win and their celebration can begin.

However, the stormtroopers superior training and firepower are more than a match for the frantic Ewoks. Armed with an arsenal of weapons as well as flashlights to cut through the darkness, players must hold back the Ewok ambush if they have a hope of surviving until an extraction team can arrive.


Crystals Return  and Some Special Appearances
Our April update isnt just about Ewok Hunt. As part of this months release, Crystals will return to Star Wars Battlefront II as one of the ways for fans to unlock Appearances, including Endor Leia and Endor Han. Real-world currency can only be used to purchase Crystals, which are only redeemable for Appearances (learn more about Crystals in our FAQ). Credits are earned through in-game activity and can be redeemed toward Appearances, as well. Over 50 additional Appearances to personalize your units will be made available in this update (learn more about Appearances and rarities, and get even more details on this update, in our Community Transmission).

And if you havent seen our big Progression Update yet, be sure to check it out  you dont know what youre missing! Its already a big hit with players and fans.

All screenshots here captured directly from the game engine.