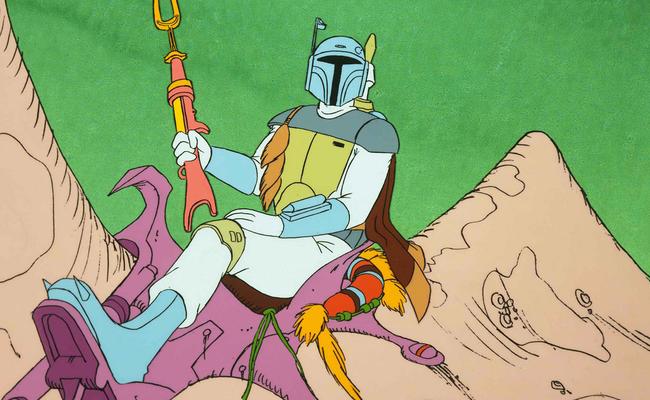 The First Appearance Of Boba Fett

40 years ago this November 17th, Boba Fett made his first appearance in The Star Wars Holiday Special in an animated short created by a small animation studio out of Toronto, Canada. Lucas Seastrom spoke with John Celestri, the man who brought the bounty hunter to life, and the history behind this small role and what the character means today is definitely worth the read. Below is a quick snippet.

Today, animation and Star Wars go hand in hand. Many of our favorite stories in the galaxy far, far away have come to us via the animated art form. But where did it all start?

The story of Star Wars and animation begins in Toronto, Canada, in 1978. There, a small animation studio, Nelvana Ltd., was tasked with creating a 10-minute sequence to be incorporated into the upcoming television program, The Star Wars Holiday Special.

The animated debut of Star Wars proved to also be the debut of an iconic character: Boba Fett. The animator tasked with bringing this alluring bounty hunter to life was John Celestri.

Im basically a self-taught animator, Celestri tells StarWars.com. Ive always enjoyed telling stories and performing. It wasnt until I was in my early twenties that I discovered I had a natural ability to animate. But you didnt have schools for animation back then in the 1960s.

A native of Brooklyn, New York, Celestri managed to break into the local animation industry. After working on television commercials and at the New York Institute of Technology, he joined animation director Richard Williams in 1976 on the upcoming feature film, Raggedy Ann and Andy (1977). He then made his way to Hollywood for work at DePatie-Freleng Enterprises.

You never know where youre going to go. You just dont know, he says. When the chance came to work at this studio in Toronto, I grabbed it and volunteered. After a short time in Hollywood, Celestri made the move to Nelvana Ltd. to work on their latest television special, A Cosmic Christmas (1977).

Animation in the United States at the time was very commercial, Celestri explains. But in Canada it was still informed by a European sensibility, a sense of art and design. A Cosmic Christmas did not look like anything that was coming out of California at the time.

A Cosmic Christmas dealt with characters from outer space seeking answers. The show was complete before Star Wars had been released. It showed that Nelvana and George Lucas were on the same page intuitively. It was a traditional theme in a non-traditional manner and I think that had something to do with convincing Lucas to go with our studio.

Though it had only been in existence for seven years, Nelvana proved a bustling creative center in the animation industry at the time, attracting artists like Celestri from near and far. Its own location had as much character as their films.

We were on the upper floor of a fish warehouse in an area of Toronto now known as Harbourfront, says Celestri. Its now a tourist area. But in those days it was a working fishery. The fish were trucked in and processed, and we were upstairs animating. And a baked goods supplier was using the storage area next to our studio area to defrost thousands of buns at an extremely high temperature that radiated through the thin sliding doors separating us. The enormous electric heaters-on-wheels ran so hot that sometimes our artists, all males in my area, would be stripped to the waist at their drawing boards!


Never Seen The Holiday Special? Watch it below!