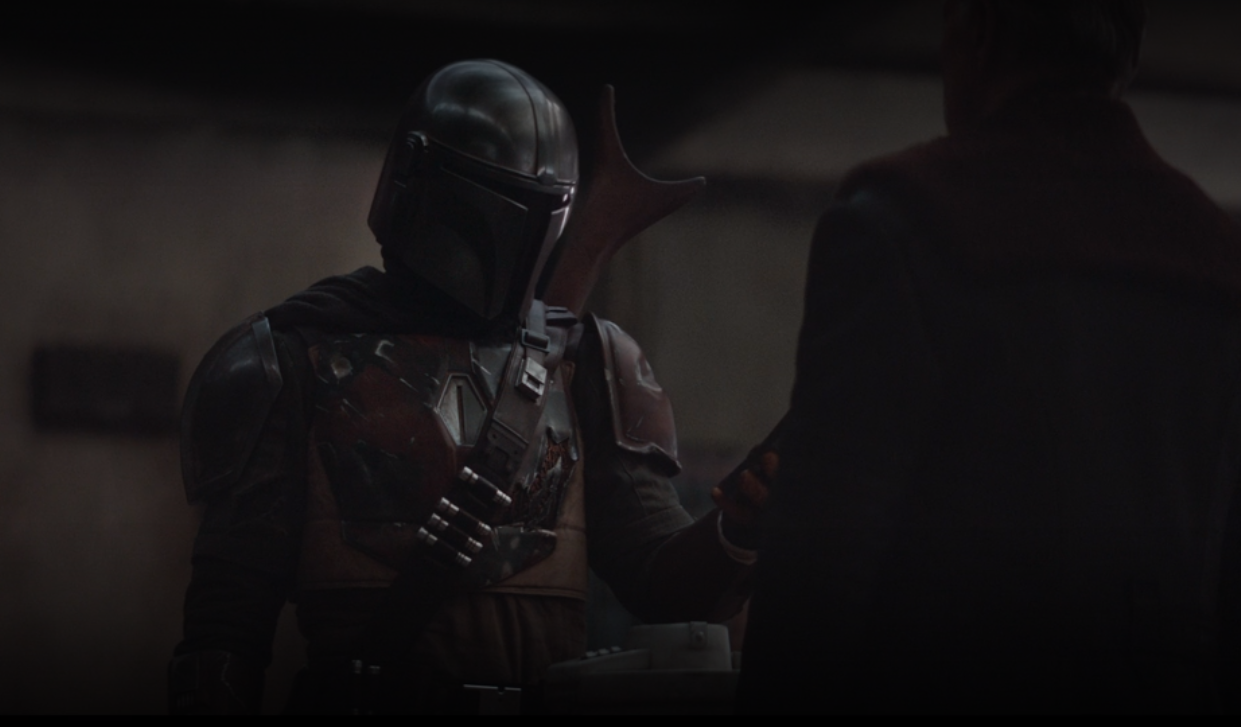 Trying to convey non-spoiler thoughts on episodes of The Mandalorian is really a devil of a job. First off, the length of the chapters doesnt really help as they are trim, efficient, and dense, making casual discussions seemingly difficult. Second, plugging ones initial reactions into a template of sorts is not very interesting when the type of world-building going on here warrants greater detail and examination.

In that vein, check back here later for Bills full spoiler review which will be much more nuanced and detail-orientated, but for now, heres an imprecise look at Chapter 3 of The Mandalorian titled The Sin.

First off, I liked this chapter very much and it shifts the narrative in an important way. It not only sets in motion what we can expect to see for the remaining five chapters but completes the three-episode arc which started when the Mandalorian first walked through those cantina doors at the beginning of Chapter 1.

Folks who attended special screenings across the county were shown the first three chapters by design, and when you see "The Sin" for yourself, youll understand why. It neatly closes one door and opens another, allowing the true spirit of the series to finally begin.

Its not a spoiler to say that the episode starts off with the Mandalorian returning the asset to the client, played manically on point by Werner Herzog. Hes still a bounty hunter with a bounty to collect, thats the whole point. Now, what happens next may or may not surprise you, depending on how much youve invested in the burgeoning relationship between the Mando and the asset. But, I will say the Mandalorian does leave with lots of beskar in hand.

The first two episodes have prepared us for a situation where our hero may have a change of heart when it comes to turning over the asset to this humorless Imperial zealot and the ghoulish Dr. Pershing. This is resolved here, but how it ultimately plays out is something that you likely saw coming. Having said that, dont let the predictability of the first half of this episode discourage you, because the second half is anything but.

Part of this Arvala-7 homecoming means a couple of stops as well, one to the cantina to see Greef Karga about more bounties, the other involves going back to see the Armorer at the Mandalorian safe house/beskar foundry.

The cantina provides enough Easter Eggs to shake a gaderffii stick at, including many familiar faces from the underworld. Most any crafty Star Wars fan should be able to spot a few well-known bounty hunters in the crowd and his conversation with Greef is laden with little winks and nods.

But its his return visit to the Armorer that provides the episodes most thoughtful and interesting exchange. First, yes, the Mandalorian gets his cuirass replaced along with the rest of his armor, hes never looked shinier. Still, no signet however as he feels his Mudhorn kill wasn't noble enough to warrant taking on that as his crest, as he had help from an "enemy"

While discussing this with the Armorer, a few Mandalorians approach and take issue with him and the Imperial company he sometimes keeps, citing our world was shattered by the Empire. This is our first bit of insight into what exactly happened to Mandalore after we last saw it in Star Wars Rebels. Their ranks were left depleted and those that remained had to live in the shadows. Doubtful the show would drop important information like this and not expand on it, so expect more details of how this came to be later this season.

During the smelting process, the Mando experiences a flashback and we get an extended look at that moment when his village was attacked. Anyone familiar with The Clone Wars will enjoy this brief sequence tremendously.

Anyways, they call a truce at the behest of the Armorer and we get a new catchphrase as a result, one that will most definitely replace I have spoken Whether this is a specific clan, tribe, or house we just dont know yet, but its clear the Mandalorian isnt necessarily a part of it. But like any other Mandalorian, he is probably welcome since their numbers arent what they once were.

I cant go much further than that because from here on out things get very consequential and very exciting. To talk about any of it, would be to talk about all of it, so Ill just leave it at that. Just know that the final sequence of the chapter is a "holy shit" moment and will have a certain ilk of fan screaming from the mountaintops.

Its one of those remarkable moments that this series, in a relatively short period of time, seems adept at delivering. And if this is type of Star Wars storytelling is indeed the future of the franchise, Id have to say, based on the first three chapters, were in good shape.

The Sin is perhaps the strongest sense yet of the influence that The Clone Wars and Star Wars Rebels will have on this show. Specifically, the collaboration between Jon Favreau and Dave Filoni is front and center as their fingerprints are all over it.

I cant help but see the parallels between Ironman/Tony Stark and the Mandalorian throughout, not only in the action near the end but from a morality standpoint. As the Mandalorian continues to struggle with the ugliness of the world in which he exists, hes coming to terms with the fact that perhaps hes not cut out for this type of work anymore. And we know Filonis affinity not only towards Mandalorian culture but the underworld side of Star Wars, having been a Padawan learner to George Lucas all those years.

This is director Deborah Chows first episode, and we know shes attached to the Kenobi series so this should give us a strong sense of what her style is all about and what to expect. She doesnt let the camera linger for too long and uses both the left and right sides of the frame very well. Specifically, during action sequences, when normally the action is centered, she stretches it to include both sides. And she clearly likes camera movement, choosing to move with the characters rather than have them enter the frame on their own.

Overall a good start, but if I had to nitpick, I would say that while executed well, her fighting scenes could use a tad more flow. I look forward to seeing her again by Chapter 7 thats for sure.

Its tough to compare this episode to the others or even bother to rank them since they are essentially one. And yes, its another short episode at 34-minutes including credits so that will give some folks reason to complain. My advice would be to just watch the three chapters in one sitting, and all your concerns will be swept away by the Star Wars goodness.

As the episode ends, we see the Mandalorian making choices that will greatly affect not only his own path but the path of others as well. He leaves this chapter with more enemies than when he started and is in more danger than ever before, so look for the Mandalorian to start looking for friends wherever he can find them.