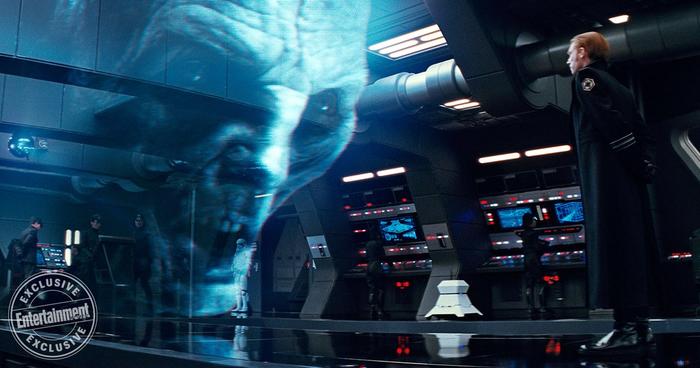 Some people absorb unspeakable pain, then vow to spend the rest of their lives working and fighting to make sure no one else has to suffer as they did. Others endure the same agony but deal with it by magnifying that pain  and blasting it back upon the world.

Supreme Leader Snoke is one of the latter.

The enigmatic ruler of the First Order finally emerges from the darkness in Star Wars: The Last Jedi, and actor Andy Serkis is revealing a little more about the villains origin and creation.

This time you get to see him, as in his real presence, says Serkis, who plays the towering Snoke via performance capture. In the previous movie we saw him as this huge hologram and tele-presence, and you get to meet him in the flesh this time.

Serkis describes a cruel master, a 9-foot-tall alien humanoid who disparages and dominates his two lieutenants: Kylo Ren (played by Adam Driver) and General Hux (Domhnall Gleeson.) Hes a predator who identifies weakness and exploits it, drawing the young and promising to his side with promises of power, then using and discarding his protégés when they are no longer of use.

He is seen here in hologram form in The Last Jedi, looking very Wizard of Oz as he bellows at Hux over some unspecified failure or disappointment. Serkis says much of that unhappiness will be directed at the former Ben Solo, however.


ILM/© 2017 Lucasfilm Ltd.
His training of Kylo Ren is not yielding what he wants, Serkis says. Therefore his anger towards Kylo Ren is intensified because he cant bear weakness in others. Part of the manipulation is goading him with Hux and playing them off against each other.

Maybe the effect of that pairing has worn off, however. Snoke may need to start goading Kylo Ren with another disciple. (Watch yourself, Rey.)

Snoke has an abiding rage toward the Galactic Republic, which he devastated in The Force Awakens by annihilating its capital with a blast from Starkiller Base. And now that anger has shifted toward the wounded Republics military force  the Resistance.

The thing about Snoke is that he is extremely strong with the Force, the dark side of the Force. Hes terribly powerful, of course. But he is also a very vulnerable and wounded character, Serkis says. He has suffered and he has suffered injury. The way that his malevolence comes out is in reaction to that. His hatred of the Resistance is fueled by whats happened to him personally.