Marvel Comics and Star Wars have had a fruitful relationship since April of 1977 when Star Wars #1 was released. And although the company has released titles under both Dark Horse Comics and IDW Publishing, its their partnership with Marvel that has produced the bulk of the releases in this new Disney era.

Continuity and connectivity are now king with Star Wars and that extends to all the ancillary products, comic books chief among them. So, it was important that the titles released not only were entertaining but obeyed the laws of Star Wars and propelled their subjects forward.

Charles Soule, among many things, is a hard-working, extremely talented writer who has been responsible for some of the better titles to be released under the Marvel banner the last few years. From Lando to Obi-Wan and Anakin to the now finished Poe Dameron run, Charles has a sharp mind and healthy respect for what made these characters great in the first place, adding layers to them never thought possible.

His incredibly successful Darth Vader run, which comes to an end this December, didnt so much change our point of view on the dark lord but rather revealed, in a sometimes very shocking way, what was perhaps there all along.

We caught up with Charles in New York at Comic Con where he was gracious enough to spend some time discussing the end of Poe Dameron and what we can expect from the conclusion of Fortress Vader Its worth noting that at the time of this interview, the announcement that his run on Vader was ending hadnt happened yet. I was able to speak with him after the announcement briefly, where he expressed that the plan all along was to get to this point then pass it over to someone else.

We discuss specifics from both Poe Dameron and Darth Vader so if you want to be spoiler-free before you read them, I suggest stopping here 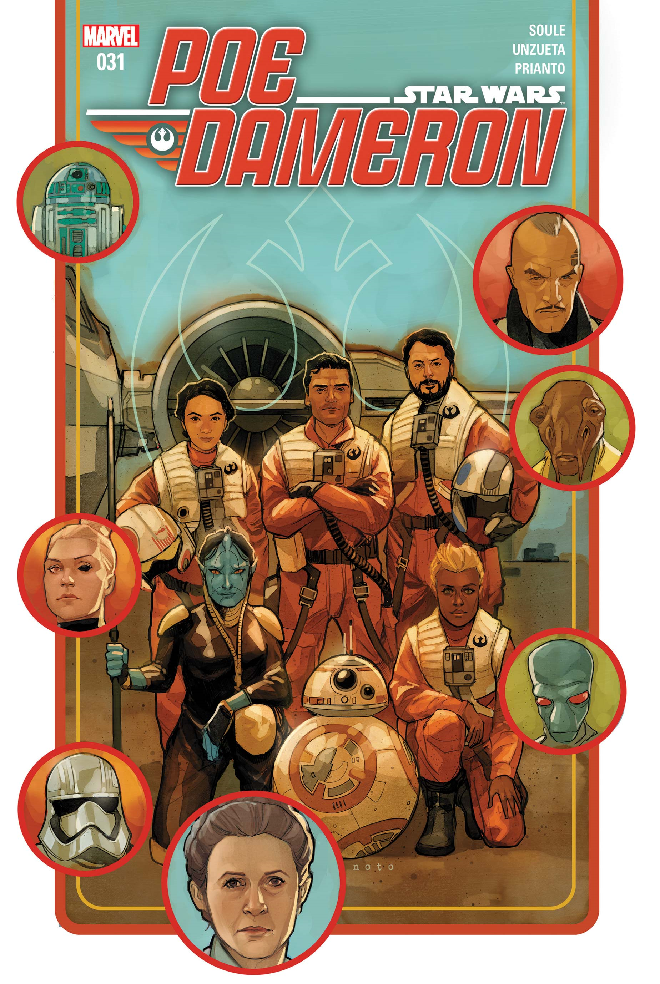 Before we get into the final issue of Poe Dameron, lets talk about what got us to this point

The original idea for Poe was 12 issues. It was supposed to be a short thing because nobody realized what it would become. It was around issue 7 or 8 when they came to me, said it was doing well, and asked if I was interested in extending the story. So, it got extended to 25 issues at that point.

The question was what would happen then at that point. The book begins with the idea that Poe and Black Squadron are sent to find Lor San Tekka in the hopes he can help them find Luke Skywalker. Of course, we know how that story ends with the scene on Jakku at the beginning of The Force Awakens.

I felt that at the beginning of The Force Awakens, Poe and Tekka seemed to know each other and that there was a cool story to be told there. At the start of my comic they havent met so the goal was to build towards them meeting.

In the earliest version of the series, they were never going to find him because when you work with Lucasfilm its always a give and take with other projects and at the time, Lor San Tekka was a no-go zone. Luckily, things loosened up over the course of the series and when I got the extension I was able to, in the last arc (22-25), have them find Tekka and have that great interaction.

Then again, I figured it was over with Issue #25, but they came to me with this idea to continue, to retell the events between Episodes 7 & 8 through Black Squadrons point of view. I felt we already knew that story so the way that I proposed we do it is the way it was presented. So, most of the story we see takes place after The Last Jedi.

Okay, about that last issue. I loved that you brought back Grakkus the Hutt into the mix. Poe going to his old buddy for a ship was a great call back for this character. In this issue, you never mention the name of the ship, was that on purpose?

I didnt name it in the script and originally had a different idea for what I wanted to do with it, but that idea didnt get the green light. So, Angel Unzueta who was the artist on that issue designed this cool ship and I wanted it to be Black One, give it a reason for Poe to say something cool when he showed up, but I didnt end up getting to it.

Because of this issue, Poe Dameron is starting Star Wars Episode IX with a promotion. Talk about the bit where Leia promotes Poe back to Commander, a rank she herself took from him in The Last Jedi.

She was the one who demoted him, so it had to be her. That moment, doing in that moment right after he gives her that speech about why its important to save Black Squadron, was a que to Leia that Poe had learned what she had hoped he would.

Originally, that promotion was not in the script, it was something that came from the Lucasfilm story group which is rare, usually most of stuff in the scripts comes from me. So, whenever something like that happens its super cool because usually its the opposite where theyre telling me what I cant use.

As far as J.J. Abrams is concerned, I have not spoken to him about it. Im sure its transmitted to them just not by me. It was just one of those moments where I had that whole scene written out and it was after they came to me with this idea.

I think Poe has one of the better backstories from this new era, was there ever a thought to go back and tell that part of his life? About his mother and father?

I thought about including Poes backstory, but the story I wanted to tell was always forwarding looking. And even though its called Poe Dameron, the series is really about Poe, the Black Squadron and the Resistance so to just focus on him wouldnt have been a good use of space. Whether theres more or not coming for this group, I just dont know yet. What I don know is that I love writing these characters and they (Marvel/Lucasfilm) seem to like me doing it, so you never know what the future will hold.

Lets move on the Vader. What was it about this character that made you want to write this type of story? Its not like to paint him in a better light?

Vader was one of the hardest things to do because when you get into that character how do you do it and not make him less? You could argue that the more we find out about Vader the less terrifying he was. I think the success of the prequels and The Clone Wars made him much more complex, but we know so much about his history now, we know almost ever minute.

So, in a way, I felt that my job was to take this character and lean into the fact that he was somebody who doesnt want to face up to the horrible things hes done. He doesnt want to think about it, he doesnt want to deal with it and the only way he knows how to avoid thinking about it is to keep doing worse and worse, more horrifying things. To go deeper and deeper, always falling.

If you look at the series, thats what hes done. He does reprehensible things from issue one basically and they get uglier as the series goes on. Some people think its cool that hes a bad ass and its cool to see him killing people, but I want to remind people that hes horrifying. My goal was for the reader to see someone not deserving of redemption.

What can we expect from this series through to the end of the year?

The final issues leading up to Issue #25, is Fortress Vader all the way. The next issue, number 22, is the Tale of Lord Momin where I re-introduce this Sith mask which was one of the very first things I introduced way back in my Lando series (Lando III/IV). Ive always kind of known where this fit in but now to have the idea that he is somehow connected to the building of Vaders castle on Mustafar is exciting.

Well see how the castle was built in a humorous sort of way and then by issues 24 and 25 we blow the doors off the whole thing.

Lucasfilm and the story group have been awesome at giving me access to as much of the storytelling and assets related to Vaders castle that I could use in these final issues. As this story develops and wraps up, youll see aspects of it show up in other materials.

With Poe Dameron finished and Vader coming to an end, whats next for you?

Id love to write a real big-deal Luke Skywalker series, something set in one of those mysterious periods that we dont know a lot about. And Ive got a really good Palpatine book in me, whether thats a comic or a novel, I think I could do a really cool Palpatine story. But nothing is confirmed.

As far as whats next, its partly about where the Star Wars galaxy goes from here and whatever my role in that might be. I really love doing it and I hope my love for these characters shows.