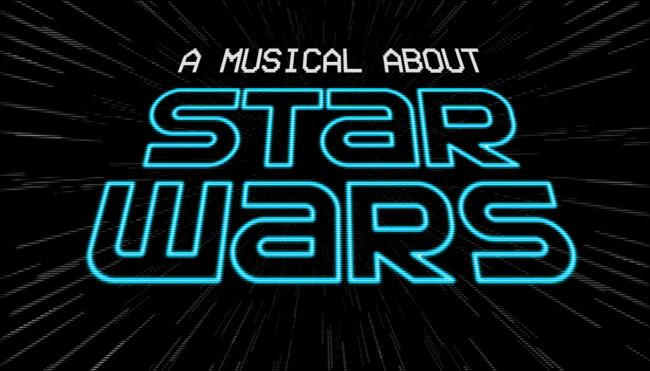 A Musical About Star Wars

Break out the tap shoes and lightsabers, because the most important musical in the galaxy is ready to take off-Broadway by storm! A Musical About Star Wars  or Why Star Wars is the Greatest Thing in the Galaxy, Much Much Better than Star Trek is set to play Theatre Row beginning March 14th with an official opening night of May the Fourthnaturally.

A long time ago, in a galaxy far far awaya Staten Island Blockbuster Video to be exact15 year old Taylor finds himself hanging out with 25 year old clerk, Scott. Bonding over their love of THE GREATEST MOVIES OF ALL TIME (Star Wars, of course) the two formed a friendship that has brought them, present day, to the glamorous off-Broadway stage. Together the self-proclaimed Millennial Falcon and Gen-X Winger have created an epic musical that celebrates the magic, the fandom, and the legacy of all things Star Wars. That is, until their costar, an actress, activist, and recent graduate of AMDA, makes a startling admission. Basically, its a show-within-a-show, its a little meta, its hella rad, and it will probably get overlooked by the Drama Desk nominating committee.

Created by Tom DAngora and written by Tom DAngora, Taylor Crousore, and Scott Richard Foster, the musical features an original score and lyrics by Billy Recce.

Taylor Crousore, Scott Richard Foster, and Emily McNamara are set to star as Taylor, Scott, and Emily with additional casting and creative to be announced as soon as everyone gets their act together.