Doug Creutz, a media analyst at Cowen Equity Research, recently delivered his financial report to investors on the performance of the Disney Corporation shares.

The full report, which can be read HERE, covers the recent financial woes Solo: A Star Wars Story is experiencing at the box office. It takes a swing at some of the suggested offenders, some of which youll be familiar with as everyone has weighed in on why Solo has underperformed. From production woes and behind the scenes drama, to poor scheduling, franchise fatigue and a lingering animosity towards Rian Johnsons The Last Jedi, which he flatly shoots down

if the franchise was able to survive Phantom Menace and Attack of the Clones, we have a hard time believing Last Jedi could have done that much damage.

So what was the culprit? According to Creutz the single biggest reason for Solos underperformance is none of those, its marketing

The soft box office performance of Solo has occasioned some concern that audiences may be suffering from Star Wars fatigue. We think this is probably not the case, and that Solo's biggest problem was an uncharacteristically poor marketing campaign.

After laying out the case financially, comparing it to past efforts, Creutz points to marketing miss-steps specifically calling out the films trailers for a likely culprit. By comparing it alongside Rogue One, he points out the 2016 film did a much better job of selling its lead, in that case Felicity Jones, and the overall sentiment of the movie. Whereas Solo: A Star Wars Story did a poor job of selling the audience on Alden Ehrenreich as the franchise's most popular scoundrel, Han Solo.

He also points out the much shorter window Solo gave itself when it came time to promoting the film. Rogue Ones first teaser came out 247 days before its release, compared to Solo which debuted just 108 days prior, with the bulk of the PR starting a month prior.

But the single most interesting aspect of this report is that Creutz even wades into the Lucasfilm leadership debate and offers up a solution. His recommendation to right the ship may or may not surprise you

promote Dave Filoni to a higher level of importance at Lucasfilm. Filoni has been responsible for two animated series, Clone Wars and Rebels, and is executive producer on a third series, Resistance, coming out this fall. Filoni has created about 10x more hours of Star Wars video content than all the movies combined, and in my opinion he 'gets' Star Wars as well as anybody.

Whats amazing about this report is that Creutz links to an episode of Star Wars Rebels most fans will be familiar with if youve seen the show. Its from Season 2 in an episode called Twilight of the Apprentice and more specifically the scene where Ahsoka Tano duels her former Master, Anakin Skywalker now Darth Vader. 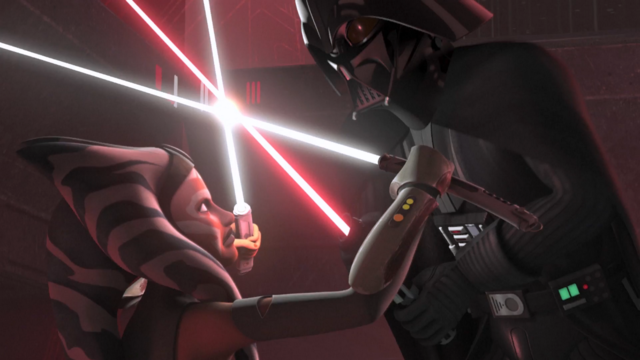 Theres no doubt Dave Filoni is a superstar amongst many Star Wars fans, myself included, and has expressed an interest in live-action feature films in the past. But is he the answer to the current swell of negativity Lucasfilm is facing from the fans? Will placing him at or near the head of Lucasfilm give every single fan across the board a reason to rejoice? Given the current climate that seems unlikely, but myself and a great many others would love to see Filoni expand his creative reach, but certainly not at the expense of someone else.

Despite the doom and gloom of this report, Creutz does end it on a high note, suggesting the best is yet to come

All in all, we expect that 2019's Star Wars Epsiode IX will do quite well at the box office, probably exceeding The Last Jedi, and that other Star Wars Story films will likely average closer to Rogue One than Solo

Based on history, the third film in the trilogy always outperforms the second. Im sure there are many people counting on history repeating itself.