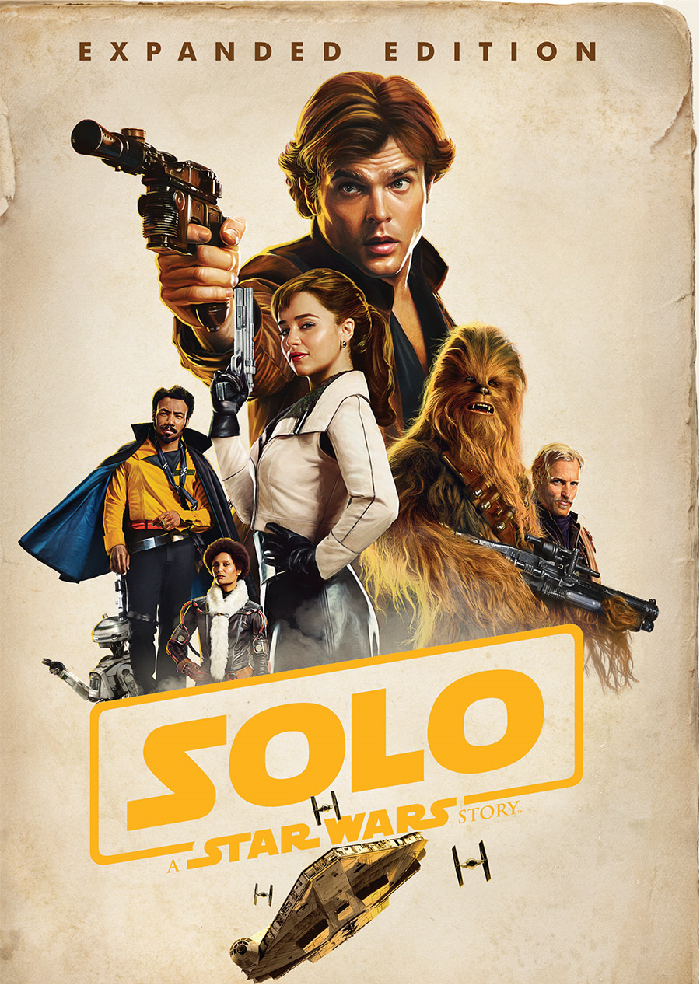 Im guessing anybody in their 40s that you talk to is going to say the same thing: in 1977 I got to see it (Star Wars) and my world was changed.

Mur Lafferty is a writer, podcaster, producer, gamer and a hardcore lifelong Star Wars fan. She is the winner of the 2013 John W. Campbell Award for Best New Writer and her 2017 novel Six Wakes earned finalist spots for the 2018 Philip K Dick Award, the Hugo Award for Best Novel and the Nebular Award for Best Novel. In other words, when it comes to writing sci-fi, she knows what shes talking about.

Her latest project, the novelization of Solo: A Star Wars Story Expanded Edition ingeniously transports us right back to the desperate streets of Corellia, the snow-capped mountains on Vandor and the death and decay of the Mimban mud flats. By expanding on certain events and characters from the film, using her own brand of storytelling, shes made this edition a truly unique one.

If her name is familiar to you, thats because this is not Murs first entry into the Star Wars galaxy as she has previously written two short stories for the franchise. The first one was a Catalyst: A Rogue One Novel tie-in which appeared in the pages of Star Wars Insider #170 called, The Voice of the Empire

Her second Star Wars short story appeared in the anthology book From a Certain Point of View, which brought together the greatest Star Wars writers of all time. Murs contribution titled, Not for Nothing focused on the infamous Figrin Dan and the Modal Nodes band who were seen playing at Chalmuns Cantina on Tatooine.

With the Solo: A Star Wars Story novel hitting shelves today, we caught up with Mur and had a brief but wonderful discussion about the book and filmenjoy! 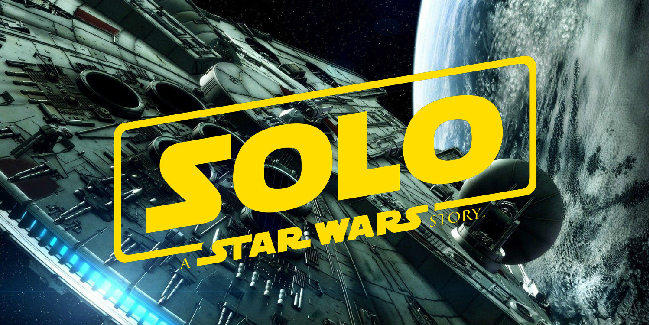 Id like to talk about the parts of the novel that deal with L3-37 waking up and having that conversation with the Millennium Falcons computer. Once shes functioning again, L3 finishes the last interrupted thought she had before she was deactivated. Was this a direct call back to Empires Strikes Back and C-3PO?

I hadnt made that connection, maybe sub-consciously. I know what youre talking about, but I hadnt thought about that consciously when I was writing it.

Was any of this conversation between L3 and the Falcon based on your curiosity or interest with Artificial Intelligence? Or was it just pure narrative fun and storytelling?

It was a bit of both. I really love the idea and concept of what is personhood? when a machine starts to think for itself and when people start to accept that. In real life, we tend to get attached and anthropomorphize things like cars and other things, and we feel grief when we lose them. Whats interesting about the Star Wars universe is they have droids that speak and who have names, but who arent always seen as people necessarily. For example, when R2-D2 is shot during the Death Star assault and Luke says, Ive lost R2 nobody else seems at all bothered by it except C-3PO.

That concept of how droids are treated is of course something that formed L3s sense of rebellion and self-importance. If nobody else was going to consider her worthwhile, then she would have to do that for herself. Shes incredibly cognizant.

We sometimes take for granted that there are generally intelligent machines in Star Wars and are accepted more as matter of fact, but the truth is were not given much background or history with their evolution in that universe. So, to have L3-37 and the Falcon, two machines, have a discussion with one another about states of existence, mortality and consciousness was great and I really appreciated, as fan of Artificial Intelligence, to have that represented.

One thing that was important to me was that L3 would very clearly, and did, give her life for another droid. I wanted to show that she wasnt just being used to save humans in their time of need, which is exactly what she wouldnt have wanted, but she was able to help the Falcon which is an A.I.

That, in the end, turned out to be a huge motivation for L3, the thought that she could save one more droid life. 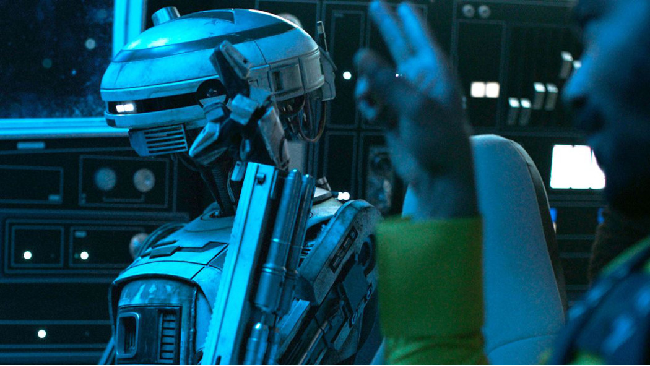 This seems to be the first time in Star Wars weve seen a droid represented this way on screen, certainly to have two generally intelligent machines having this type of moral or philosophical conversation. Was the line from The Empire Strikes Back on your mind at all, where C3-PO says, I dont know where your ship learned to communicate, but it has the most peculiar dialect.

I definitely had that in mind when I wrote the book. That was one of my favorite little moments from the original trilogy. Thanks to Solo now, that line, even though it was written so long ago, now feels like this great Easter Egg.

When you were writing the dialogue for the Falcons computer, did you have a particular voice in your head or was it digital? Like an old-style speech synthesizer?

It was digital for sure because I didnt have, or was given, any information from the Lucasfilm team about the Falcons Artificial Intelligence. First, I had her talking in binary but then out of practicality, she would talk using more digital type words, mainly so I was able to bring it across to the reader.

A lot of the relationship between Lando and L3 is about consent. L3 is always quick to point out that she has free will and belongs to no one, yet their working relationship is based on employer/employee.

Definitely. L3 is self-created and made up of different droids which she did all by herself. Remember, she doesnt have a restraining bolt; she really doesnt have to do what he says. Lando treats her more like an underling, not like a droid and theres a big difference between the two. The way he speaks to her, you can hear the affection normally reserved for a person and its the affection a Captain would have for his or her first mate. For example, when Lando says he would wipe her memory, I always took that as tongue and cheek, he would never have it in him to do that.

Did you have or reference any source material when you were setting up this scene between L3 and the ships computer?

No, not really. I had the script and was able to see the movie a couple of days before turning in the book, so I was able to tweak a couple of things that I hadnt pictured quite right. As for the original stuff, that was just me conceiving it.

When you read the script and then later saw the film, what jumped out at you right away as something you wanted to expand on?

I wasnt sure how I was going to approach it and just wrote down some ideas. Then I read The Last Jedi novelization and loved what Jason Fry did and reading what he did with that story gave me a little bit of confidence to take Solo in a new direction. So, when the film opens with Solo running, breathing hard and a little bit bloody, I was thinking, how did he get there? so I wanted to push it back 15 minutes and see how he got to that point.

I think, because there are constraints in film, there are big jumps in time and that leaves big holes to play in story wise. For example, I thought Val was a fascinating character that really didnt get enough screen time beyond why are we bringing this stupid kid along. They were such a colorful group that I thought she needed a little bit more personality thrown in, so I included a couple of little conversations between her and Beckett. And her death scene was completely from her point of view, including a moment of reflection on her part, looking back on her life.

Val was definitely one of the characters that many folks wanted to see more of so by expanding on her story a little bit I think you really touched on something special there. Likewise, probably the character people reacted most to, which like Val didnt get a lot of screen time, was Enfys Nest. I know at one point you were going to have Enfys Nest meet and give the coaxium to Bail and Leia Organa, but went with Saw Gerrera and Jyn Erso instead?

The deal is with her saying at the end the coaxium will fuel the rebellion, were all sitting there thinking the same thing. And I thought if were all thinking the same thing then lets just take it one step further. The best part is during this period in the timeline, at the dawn of the rebellion, there are two young girls (Jyn and Leia) who both have grand destinies. I just kept thinking either of them could get a whole lot out of meeting someone like Enfys Nest at an impressionable point in their lives.

Originally, I thought of the Organas, but my editor suggested going with Saw and Jyn because of the timeline thing. Neither had a really strong female presence growing up after their mothers died so I thought it was really important that they encountered someone as strong and powerful as Enfys at that point in their lives, even if it was just a tiny little exchange.

Even though you expanded on Enfys Nest from the film, it still feels like theres so much more to learn about her.

I would love to do more Enfys Nest. Actually the only thing that was really cut from the book that I wrote was an Enfys Nest backstory that Lucasfilm didnt object to, they just werent ready to talk about or explore her backstory currently.

Thats a good sign and usually means they have plans for her! Shes immensely popular and Im sure they have a grand plan for Enfys Nest. I think you really tapped into her story and expanded on so much of what people were left wanting more of so great job and good luck in the future!

Well, there ya go! Mur was extremely generous with her time and very gracious. I really loved to talking to her, she's very passionate about Star Wars and it comes through. We of course talked about Maul as well, but i'll save that for another time!


*This interview has been edited for length and content.


UPDATE: Mur Lafferty also spoke to our Jedi Journals podcast and you can now listen below! The Mur Lafferty Interview begins at 1:02:44!