A Closer Look At The Deleted Scenes From Solo: A Star Wars Story

Warning! Spoilers ahead for Solo: A Star Wars Story...

With Solo: A Star Wars Story out now digitally, on Blu-Ray and every other format, we are taking a closer look at the eight deleted scenes that come with the release. Obviously there are spoilers ahead not only for the film but the deleted scenes themselves so be warned.

Deleted scenes are just that, deleted scenes that were never intended to be used, cut for time or just didn't pan out once the dailies came in. These eight scenes all fall under one of these categories to be sure and while fun, they either drag, are unnecessary or are just plain silly. They certainly don't fix anything for me personally with this film, the novel does that to a degree, but like I said they are a lot of fun to watch.

These eight were selected for a reason and maybe one day we'll find out why. It's no secret the film was mostly re-shot by Ron Howard so it begs to ask the question, where is the rest of the footage? Isn't that all considered "deleted" as well? Given the behind the scenes drama, I suppose it's not surprising they don't want to rehash old wounds. Anyways, with no commentary on this release, this is all we've got so enjoy! 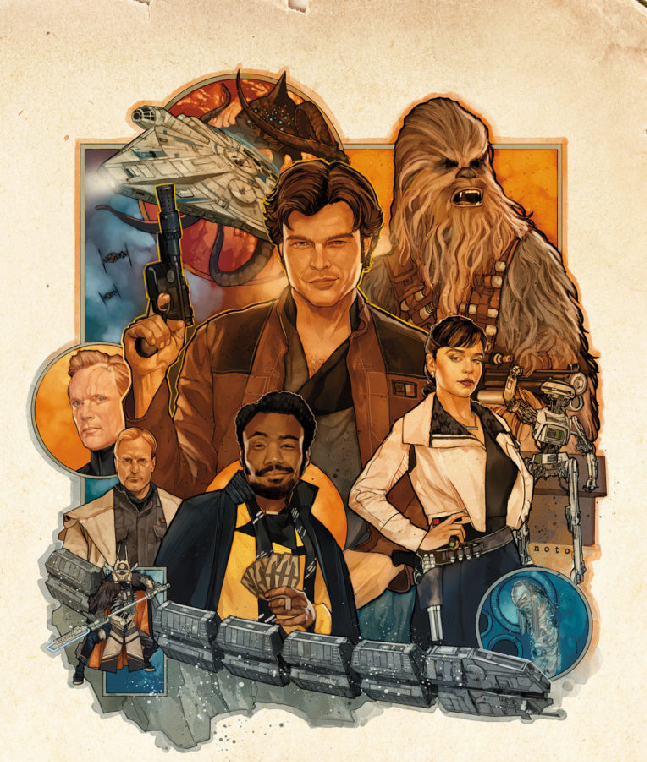 The first deleted scene finds us on Corellia and is called Proximas Den This is a similar scene to whats in the film where Han gets back to their lair and tells Qira all about the job that just went wrong and that he has a plan to escape. In this version we dont see Han pass Qira the coaxium he stole however which makes me wonder if it was an earlier version that didnt involve it at all. With out it however they wouldnt have been able to bribe their way off Corellia so.

Instead of Han running into Qira in the one of passageways, he goes to her bunk and wakes her up. Moloch and Rebolt show up and take Han away to explain his side of the story to Proxima herself and it cuts to some White Worms in Proximas pool coddling, and what looks like training, baby Grindalids.

There are three significant things about this scene worth mentioning. First, as Han is walking through the passageway getting to Qiras bunk, you hear other younger Scrumrats playing Sabacc as they shout full Sabacc and Idiots Array. This is important as it establishes where Han learned to play Sabacc. Second, when Han mentions to Qira he has a plan and they must leave right away, she seems apprehensive and a little unsure, not like the Qira we see in the final cut of the film. Finally, the baby Grindalids are super cool and I wish they would have kept them for the film.

The second deleted scene takes place after Han gets his M-68 stuck during the Moloch chase and he and Qira are on foot. They are in some type of market and to avoid the Corellian Hounds jump into a barrel of what looks like eels or snakes. In a possible nod to Indiana Jones, Han isnt crazy about the idea but seemingly has no choice.

It works, as the smell throws off the hounds and Moloch and his men move on. Han and Qira then share a quiet but funny moment, as he leans in and tries to kiss her. Shed rather not under the gross circumstances and as Han feels something crawl up his leg, they jump out only to find one of the eels has gone up his pants.

This is most definitely a throwaway scene as in the final version we see Han and Qira kiss a few times by this point and their attraction to each other palpable and established. Other than seeing the Corellian Hounds up close and a bit more of the streets of Corellia, it serves no purpose. It does show Qi'ra as being more daring and resourceful than Han, something that would come up later in the film.

This deleted scene has been making the rounds and finds a Cadet Solo facing an Imperial Tribunal for his poor performance and bad behaviour. This scene is wedged in between the terminal on Corellia where Han enlists and the Mimban scene where we see him flying through the air and meeting Beckett.

Some of the complaints about the film was that they skipped over Hans time in the Imperial Navy and this scene does little to quench that thirst. We see Han briefly in a simulator where he crashes his Tie and injures his eye in the process but that happens very quickly.

He gets a dressing down from Commodore Moff who explains to him the Empire has no room for heroics. It's here he gets assigned to infantry and we pick up the action on Mimban. While its great seeing the inner workings of the academy and the moment where Han gets kicked out of the Navy, it's simply too brief and too light on details. Worth noting, it was supposed to be one of the Tag and Bink scenes before ending up on the floor.

This deleted scene is an extension of the one in the film where Han first meets Beckett on Mimban and they charge over the hill together in battle. Instead of cutting to the trenches immediately after, we get a bit more of the battle sequence and see Val and Rio in action. We also see the death of Korso, one of Becketts men, which provides the opening on the team that Chewbacca eventually fills.

Like I said, Koros death opens a roster spot for Chewie, but it also shows a softer side to Beckett, Val and Rio as they are clearly upset by their friends death. Its for this reason it makes sense to cut it because it would negate the next scene and make Becketts and Vals ruthlessness less believable when dealing with Han. It was important to keep them edgy for another scene or two to make their eventual warming to Han a bigger deal.

This isnt a deleted scene so much as another, longer version, of the bit where Han first meets Chewbacca in the mud pit. It doesnt add much to the final edit other than theres more back and forth between the two except that in this version Han holds his own a little more against the Wookiee, but the outcome is the same.

It makes this scene just way too long and repetitive and the pacing is bad with too many pauses in the action. One thing it does do is establish early that Chewie is not the beast the Imperials think he is, and deep down is a good Wookiee. But thats something we already know thanks to 41 years of Star Wars.

This scene takes place on Vandor right after the train heist sequence as Beckett, Han and Chewie are on their way to meet Dryden Vos. For some reason, Han and Chewie engage in a snowball fight and tussle a bit on the ground.

Its a fun scene for sure but belongs on a blooper reel, not a deleted scene list, and certainly not in the final cut of the film.

This adds a bit more to the scene where Han, Beckett, Chewbacca and Qira have their first discussion with Dryden Vos in his office. We see Thwip feet (a delicacy) and Dryden dressing down Beckett in front of the crew a bit more than in the final version.

It adds nothing to the final version and was more than likely just cut for time. It shows Beckett appearing quite weak in front of the group so perhaps they werent ready to go there just yet.

This very short scene shows Han looking at the refined coaxium in the cases as Dryden Voss yacht approaches. He asks if they have anymore cases setting up the ruse he pulls on Vos and the others in the following sequence.

This bit would have tipped off the audience potentially to what Han's plan was so it makes sense why they cut it.

So that's it! I think you'll have a lot of fun watching these whenever you get to it but agree that they were necessary cuts from the film. Like I said, I have no doubt there's a pile of material somewhere that perhaps one day we'll get to see.

Solo: A Star Wars Story is out now on digital, Blu-Ray, 4K and DVD.