Craig W. Chenery will be stopping by occasionally here to drop some video game knowledge, but first let's learn more about Parker Bros. 1982 hit, The Empire Strikes Back! 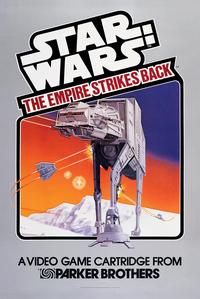 Not so long ago in a living room that probably had shag carpeting, tacky wallpaper and parents with leg warmers and neon running pants, the marriage between Star Wars and video games was born. It was a relationship that would continue to this day and beyond. The Empire Strikes Back has the privilege of being the first licensed Star Wars video game on the market. Published in 1982 by Parker Bros., a company famous for board games such as Monopoly, Sorry and Trivial Pursuit, it was initially released for the Atari 2600 home gaming system and remains a nostalgic favorite among gamers. The release was significant in that it was one of the very first movie tie-in video games. Movie licensing was certainly not as widespread as it is today and so the ability to play a game based on a film was new to audiences.

The concept of the game involves the player controlling Luke Skywalkers Snowspeeder during the battle of Hoth and preventing the approaching AT-ATs from reaching Echo Base. It is a side scrolling design where the player must destroy the AT-ATs by shooting them in the head or body. Shots to the legs do not count. The Walkers are destroyed once they have changed color from black to yellow taking forty-eight shots each. Additionally, players can destroy them by shooting the small flashing square that randomly appears. When released for the Intellivision system, the difficulty was toned down and the Walkers only required thirty hits to destroy. The Snowspeeder also includes a color change system as it takes damage. However, it can be repaired by landing at the bottom of the screen. 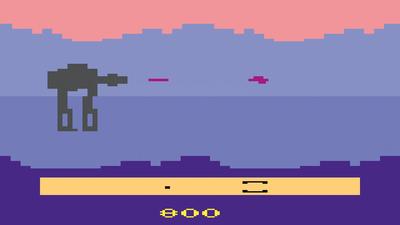 The player gets five lives a game and as the game progresses, the difficulty level changes and the gameplay changes slightly. In some levels, the walkers are solid, meaning that the player can crash into them, damaging them and destroying the player. Others include a smart bomb which periodically launches from the flashing port on a walker and tails the player. If the player is hit by the smart bomb the speeder is destroyed. Periodically, the player is granted The Force and the speeder flashes and becomes invulnerable for a short time. Ultimately, there is no finale to the game player. It simply ends when either the player runs out of lives or the AT-ATs reach Echo Base, so players expecting a mission completed announcement are left wanting.

So how does the game hold up thirty years later? Compared to titles released today, the graphics, while cutting edge at the time, are quite rudimentary. You can see what the graphics are supposed to represent, but the limitations of the hardware limit the visual experience. The strength of games from this era was the focus on playability. Players were not gifted infinite lives and restarts and progression through games relied on patience and skill. The Empire Strikes Back plays as well today as it did back in the day. While I naturally find myself gravitating towards more modern titles, I still find myself plugging in the old Atari 2600 every once in a while and taking on the whole Empire myself.

Shortly after release, the great video game crash occurred. The industry was saturated with overpriced and under developed games and industry revenues tumbled ninety seven percent from $3.2 billion in 1983 to $100 million by 1985. The future of Star Wars gaming seemed to be in jeopardy before it had begun. Coming up next, Star Wars invades the arcades and scrambles to pick up the pieces of a crumbling home gaming industry.