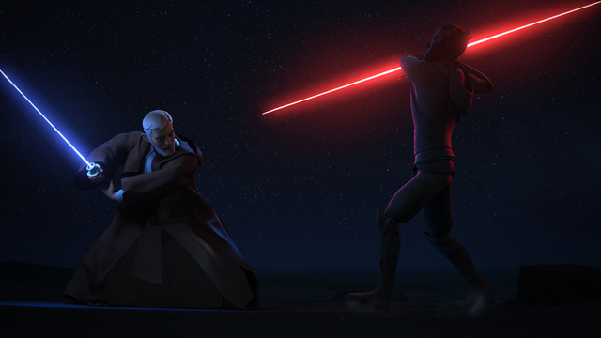 The Legacy of Obi-Wan and Darth Maul Chapter V: Brothers in the Force

"If you define yourself by your power to take life, a desire to dominate, to possess, then you have nothing."

The events that led Maul to Tatooine in 2 BBY are complicated and long but understand that everything he did prior to this, his hatred of Kenobi never ceased to pulsate. If you know your Star Wars Rebels then you know much of the story but whats important is that once he found out Kenobi was still alive after all these years, his thirst for revenge was reignited. As for Obi-Wan, thanks to Episode III: Revenge of the Sith, we know why he went to Tatooine seventeen years prior and what purpose he serves there.

Their final meeting can be accredited to Jedi Ezra Bridger who Maul used to locate Kenobi. Ezra is looking for Kenobi hoping he can help with the rebellion and Maul is using Ezra and his youthful naiveté to lead him straight to the Jedi Master. When Ezra gets lost and stuck in a sandstorm he is rescued by Kenobi and awakes in front of a campfire with Obi-Wan. Just as Obi-Wan explains to Ezra that hes been just a pawn to Maul this whole time, the former Sith shows up. Kenobi sends Ezra on his way refusing his help with Maul and the final moments between these two great warriors begins.

As the two old foes circle each other they share an exchange where Maul questions why Kenobi has come to Tatooine, a mostly barren wasteland. Its only when Maul guesses hes there protecting someone that Obi-Wan fires up his lightsaber indicating to Maul that hes prepared to fight, and even die, to protect his secret. A few tense moments pass then Maul lunges at Obi-Wan attempting the same hilt-strike he used to kill Qui-Gon Jinn all those years ago. Obi-Wan would easily counter this attack and cuts Mauls lightsaber in two landing a death blow in the same instance.

As Maul collapses, Obi-Wan catches his fall and holds his longtime adversary in his arms, comforting him, one last time. Maul asks if the person Kenobi is protecting is indeed the chosen one stating, he will avenge us... And with that the former Sith Apprentice and son to Mother Talzin and Dathomir, dies for the last time. Obi-Wan softly closes Mauls eyes and looks at his fallen enemy with great sympathy and empathy, realizing at last, his brother in the Force is at peace.

Whats amazing is that it appears Obi-Wan considers Luke Skywalker, not Anakin, to be the one who brings balance to the force. This is a bit of a revelation as weve been led to believe the whole time it was Anakin Skywalker who was the chosen one. Of course, we know that didnt turn out so well so its logical for Obi-Wan to think this way. But really the big takeaway is the growth each character has experienced and how that reflects their choices, even to say how the dark side and light side differ from each other. The dark side corrupts and deals in absolutes and toils in vengeance where the light side teaches patience and calm and forgiveness. Unlike the Sith, the Jedi do not form attachments which in the end likely gave Kenobi the upper hand, perhaps the entire time. But theres one thing that accompanies those that do not form attachments and thats the undercurrent of remorse. Kenobi may have chosen the Jedi path and to follow the Jedi Code, but hes not without feeling and anguish.

Maul didnt grow or change in all the years they had known each other. He wasnt strong enough to get past any of his anger or fear or appetite for revenge, his mind would stay corrupted to the end. Through it all, in his many attempts to corrupt Obi-Wan, perhaps its at this task that he failed the most. Haunted forever by the sins of his past, its doubtful even the death of Kenobi would have healed his mind and brought him peace. Because of this Maul truly is a tragic character, worthy of our sympathy and of Obi-Wans compassion and respect, even after everything, even at the very end. 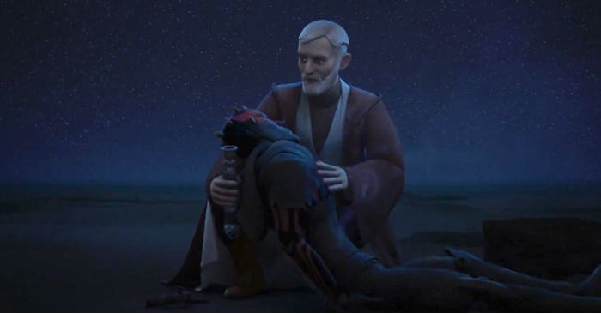 "I was apprentice to the most powerful being in the galaxy once. I was destined to become so much more."

This is part 5 of a 5 part story. Click here for Chapter I: A Remarkable Debut