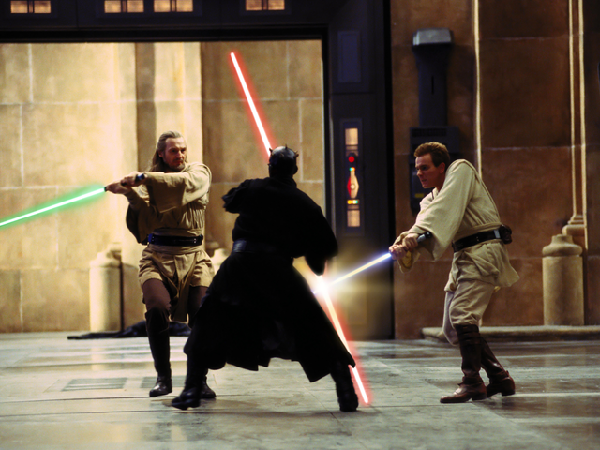 The Legacy Of Obi-Wan And Darth Maul Chapter I: A Remarkable Debut

With Star Wars Rebels nearly over, its only right that we look back on the series that was and celebrate a show that expanded our view on the mythology and meaning behind some of the greatest Star Wars moments put on screen.

Over four seasons of great programming there are almost too many key moments to look at for inspiration, but one moment stands out for me personally as a longtime fan. It was during Season 3 in an episode titled Twin Suns where we saw the now famous final meeting between legendary Jedi Master Obi-Wan Kenobi and former Sith apprentice Darth Maul, by this time however he was just Maul.

This scene on its own is powerful enough with striking imagery, a haunting musical score by Kevin Kiner, superb writing by Filoni and Gilroy, and dynamic voice work by Sam Witwer (Maul) and Stephen Stanton (Kenobi). But luckily for us this moment in time, this final battle between these two, is something that's been building and building, since 1999 in fact. This relationship, which lasted 30 years, is unique even in the confines of the Star Wars universe.

The connective tissues between this scene and all their previous encounters is right there for us to piece together, like an intriguing puzzle. This kind of rich storytelling rooted in the deep Star Wars tradition is a romantic and emotionally rewarding experience. As their paths cross one final time in glorious fashion their story is now complete, and we were lucky enough to be witness to it.

Its both a journey back in time and a look to the future as Obi-Wan bravely ends one chapter and starts another. But like all good stories, there must be a beginning...

Chapter I: A Remarkable Debut

It was Star Wars Episode I: The Phantom Menace where we first met Darth Maul. The Zabrak from Dathomir was a Sith apprentice, learning the ways of the dark side from Darth Sidious who unbeknownst to us at the time was masquerading as Senator Sheev Palpatine from Naboo. Mauls hatred of the Jedi went as far back to when he was very young, when Sidious forced him to observe a great battle on Malachor between the Sith and Jedi. He was forced to breath in the ashes of the fallen Sith warriors, thearby consuming their fear and hatred of the Jedi in the process.

As he grew older, his thirst for revenge against the Jedi only got stronger so by the time Palpatine was ready to reveal the Sith to the universe once again around 32 BBY, Maul was a formidable Force user and full of rage.

As the war between the Galactic Republic and the Trade Federation reached Naboo, Queen Amidala and Jedi Qui-Gon Jinn and Obi-Wan Kenobi, fought to reclaim the capital and take it back from the Federation. Maul was there waiting for them and the two Jedi engaged him while war raged outside.

This is where our story begins in many ways. Jinn had faced Maul earlier on Tatooine briefly but Kenobi only caught a glimpse of his future nemesis. So, this meeting on Naboo would be the first between the two would be rivals. A rivalry which lasted 30 years and would end under a blanket of cold stars, alongside a smoldering fire, in the lonely Tatooine desert. The two settings, much like to two men, could not be more different.

The now infamous duel was long and violent, and Maul held the upper hand on the two Jedi for most of it. Mauls strategy was to separate the two, which he achieved once they were drawn into a generator complex. It was here Jinn and Maul became isolated from Obi-Wan and fought one on one while a helpless Kenobi stood by.

Maul would gain the upper hand on Jinn, using a hilt strike, and would stab the Jedi Master through the torso seemingly killing him. An enraged Kenobi then took on Maul, all alone this time. Kenobi was disarmed at one point and Maul had the upper hand taking advantage of Kenobis rage at the murder of his mentor and friend. He calmed himself using the Force and was able to out maneuver Maul and slice him in half at the waist. Its worth noting that this defeat of a Sith was the first by a Jedi in over 1,000 years. Kenobi got to his fallen master, but it was too late with Jinn dying in his arms making him promise to complete a young Anakin Skywalkers training.

Click here for Chapter II: Back from the Dead