Things have a tendency to change over a 30 year period, so it stands to reason that even vehicles with which we are hugely familiar will have changed during that time, hence the justification for Star Wars The Force Awakens: Incredible Cross-Sections. So while we've seen cross-sections of the Millennium Falcon, X-wings and TIE Fighters in the past, with the advancements in technology, we get to see how the designs of these fan favourites have changed, along with new vehicles like Rey's Speeder, Resistance Transport and Quadjumper.

The introduction briefly covers various aspects of vehicle technology, comprising hyperdrives, gravity, sensors, energy weapons, power sources and shields, before moving onto the first of the featured vehicles. As with Star Wars The Force Awakens Visual Dictionary, the book is essentially ordered chronologically, based on the vehicles' appearance in the movie, though it could be argued that the Finalizer should be first, and given its position in the book, Poe's X-wing should have been the blue & white version. As it is, the Stormtrooper Transport is the first vehicle, followed by Poe's black & orange X-wing then Kylo Ren's Command Shuttle, with the Finalizer coming after that, the giant Resurgent-class Star Destroyer being afforded a fold-out four page spread. Rey's Speeder is next, after which come the regular and Special Forces TIE Fighters. Han's Freighter and Snow Speeder round out the second-half of the book, along with the aforementioned Quadjumper, Millennium Falcon and Resistance Transport. Preceding the acknowledgements that close the book is a size comparison, showing how the vehicles stack-up against each other, from the Finalizer at nearly 3,000 meters in length, down to Rey's Speeder at less than 4 meters. 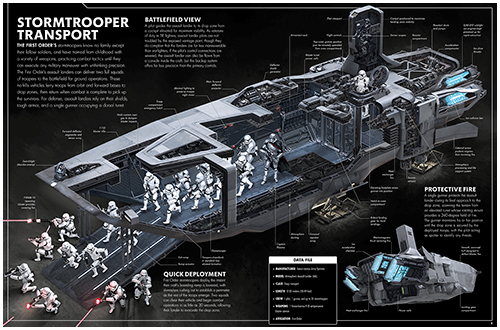 As we've seen in previous Incredible Cross-Sections' books, it's not all about the phenomenal illustrations, this time rendered by the talented Kemp Remillard, with frequent Star Wars author Jason Fry providing introductory paragraphs and descriptive text for the multitude of composite parts that comprise each vehicle. Among those are little gems that explain that the crew quarters of the Millennium Falcon were reconfigured to include a galley as a wedding gift for Leia Organa and that onboard Han's freighter Eravana, is a cargo module 9906753, that just so happens to be the identifying number used on the crate that held the Ark of the Covenant in the cavernous warehouse of Hangar 51 from 1936!

Dotted throughout the book are a number of still photographs, showing a number of scenes from the movie, including the Millennium Falcon being chased through the Starship Graveyard on Jakku, X-wings of the Resistance skimming across the water towards Maz Kanata's castle and Kylo Ren's Command Shuttle approaching the Finalizer accompanied by Stormtroopers Transports. 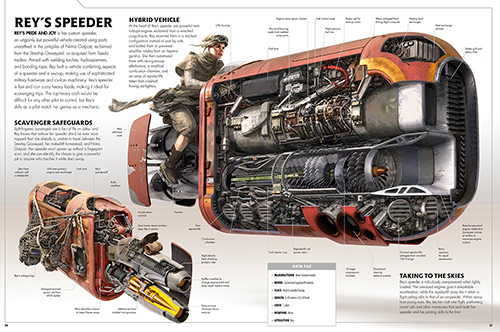 Priced $19.99 in the U.S. and $22.99 in Canada, Star Wars The Force Awakens: Incredible Cross-Sections is out now and available to buy online and from all good bookstores.

As always, a big thanks to DK Canada, whose Star Wars Boutique you can visit here. For all of your monthly roundup of Star Wars publishing news, commentary, and discussion on the latest releases in the realm of novels, comics, and magazines, don't forget to listen to Jedi Journals.