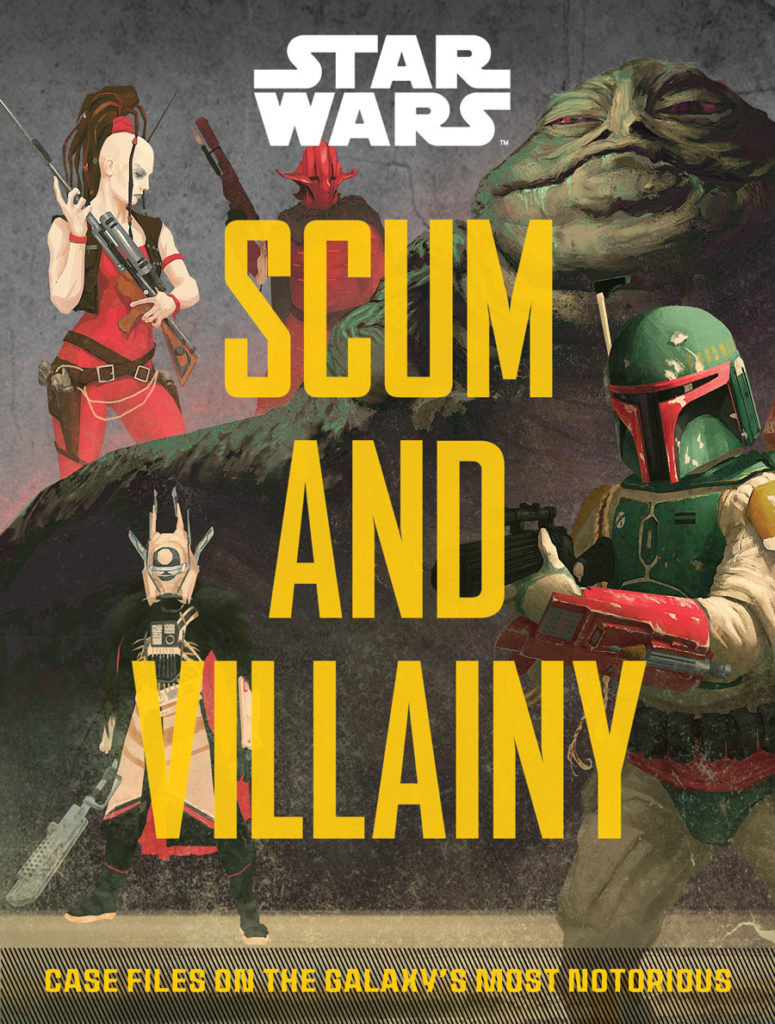 Spoiler Alert! Details contained within the book "Star Wars: Scum and Villainy" are ahead...

Crime in the galaxy is a constantwhether its seedy deals made on the lower levels of Coruscant or organized crime syndicates in the outer rimbut how galactic law enforcement has defined those crimes has shifted with each change of power.

Star Wars: Scum and Villainy profiles the misdeeds of infamous smugglers, pirates, gamblers, bounty hunters, and thieves throughout galactic history. Page through the case files of three generations of galactic law-enforcers and explore their case reports, surveillance images, warrants, artifacts, and much more 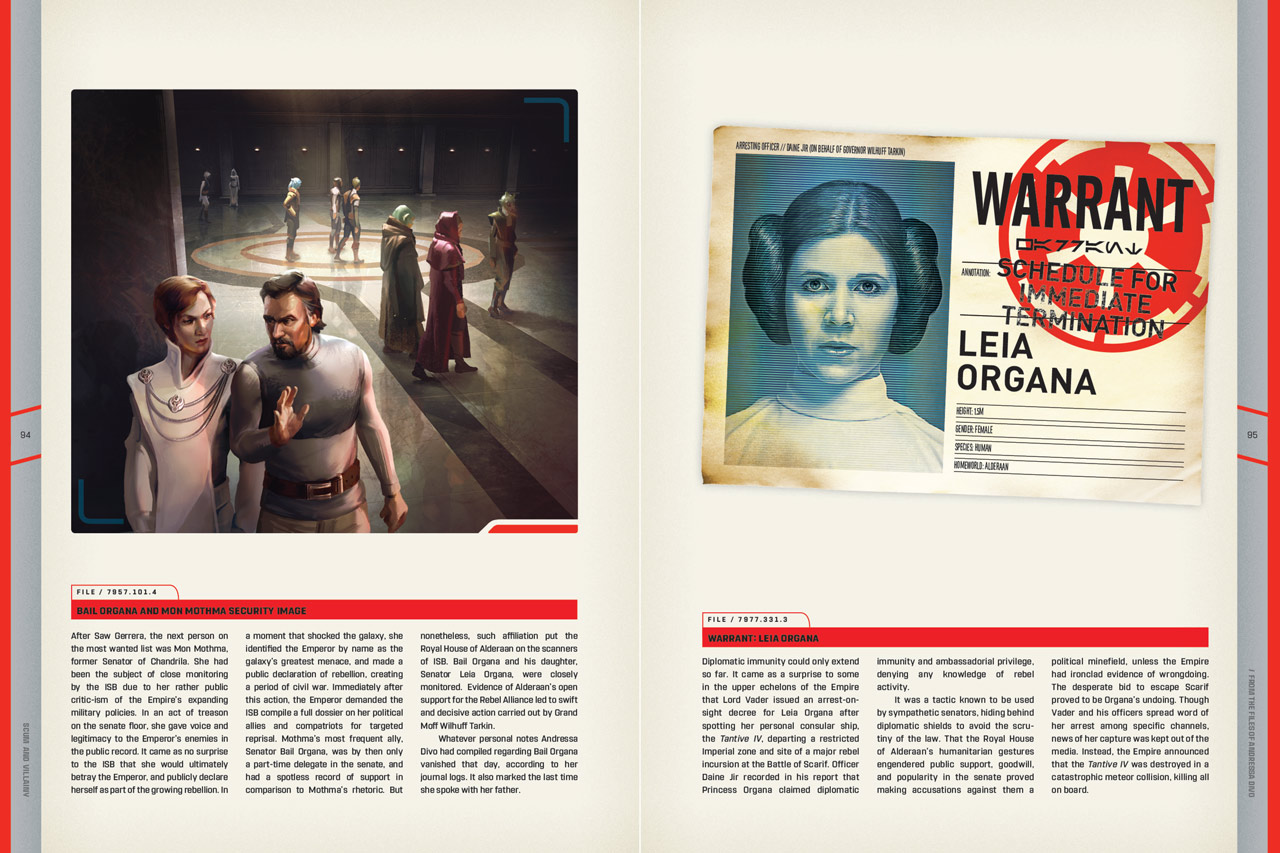 In the latest reference type book from Lucasfilms resident continuity expert and story group member, Pablo Hidalgo, we explore the dirtiest of the dirty, the lowest of the low and the people commissioned with bringing them to justice. This fully realized and wonderfully illustrated book takes us on a linear crime story covering a vast array of undesirables through the Republic, Imperial and New Republic eras of the Star Wars timeline.

The book follows Tan, Andressa and Exantor Divo, three generations of galactic law enforcers who each try their best to maintain law & order in a dangerous and ever-changing galaxy. Their moral compasses and official oaths get tested around every dark corner and through every door as the lines between good and bad are often defined by the philosophies of the current government.

This book will most certainly check all your personal boxes of who your favorite villains and vigilantes are. But expect to have your horizons expanded as Pablo introduces us to some brand-new characters and offers insights to established ones that will most definitely blur the lines between good and evil. Yes, youll see Hutts and Fetts, but youll also go deep into the Xrexus Cartel and Amaxine Warrior militia as well. And for every ill-intentioned Bossk, you'll get a noble Mon Mothma to help delineate sides. Even crusaders such as Saw Gerrera and Jyn Erso will test the limits of right and wrong, legal and unlawful, and re-define the rules of engagement. And with no medium left unturned and going right up until the most recent of timelines, youll get different looks at events depicted in Solo: A Star War Story and Charles Soules Poe Dameron comic book series as well. There really is something for everyone here.

What this book also does well is play with our notion of what characteristics define a scum or villain. It maintains a wonderful ambiguity with certain characters whose deeds are heroic one moment, then criminal the next. Enfys Nest, was she a criminal, vigilante or hero? Was Princess Leia a conspirator or partisan? Was Quinlon Vos an informant or was he righteous? You might be surprised to learn that it often depends on your point of view and the point of view of whos in charge.

Hidalgo is most known lately for his fantastic visual guides and dictionarys which blow up any pre-conceived notions that not everything means something. From the apparent to the not apparent whatsoever, these guides expand on the grand all the way to the minutiae and explore the galaxy in a way not done by anyone else. His insights and access to the huge library of Star Wars factoids, which he helped create, allow for a playfulness on the part of the producers to outfit their films and characters with a detail few other franchises allow for. 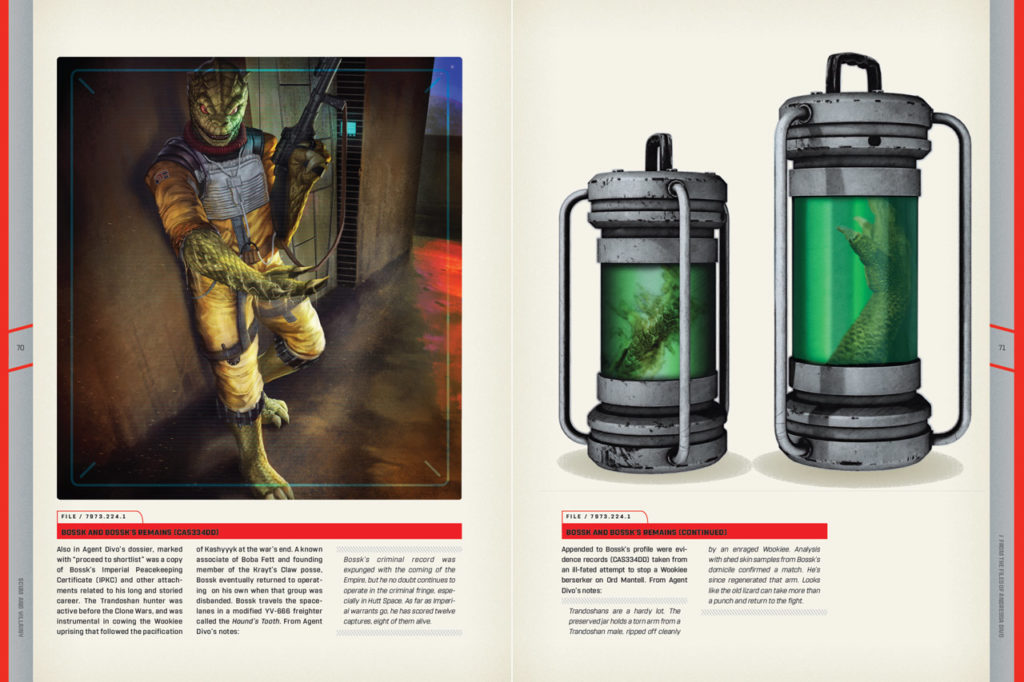 And while we get a taste of that style with some important artifact and weapons backstories, this book is tonally different from those. This latest achievement is more than just a guide or encyclopedia, sloshing through an endless amount of Star Wars villains, renegades and scoundrels. No, because of the linear nature of tracing though three generations of law enforcement, it reads more like an intriguing story or novel, rather than a reference guide.

The case file aspect and allowing of personal reflections and anecdotes by Tan, Andressa and Exantor Divo serves as both a clever format and an intriguing crime story. And while the characters all throughout the book certainly warrant your attention, and there are a lot of them, I was most attracted to these three generations of police. Amidst an ever-changing ruling body they struggle to maintain their moral compasses, but by relying on their belief in justice and their training, they persevere. And that's what makes this a real page turner, the personal inscriptions from each of them gives us a point of view we don't see too often.

There are two sides to every story and what Pablo has done here is offer up a third. And believe me when I tell you, I haven't even scratched the surface when it comes to the events and characters in the book. There's so much context on every page it's difficult imagining a casual Star Wars fan getting much out of it, but for someone looking to expand their knowledge, this is a gold mine.

If the Divos are the stars of this book, then the art that adorns every single page is the secret weapon. This format only works with effective imagery as Hidalgo employs video surveillance stills, wanted posters and propaganda materials to great effect and the art matches the exposition nicely. With artists such as Raph Lomotan, Ronan Le Fur, Alberto Rocha and many, many more this book is just as nice to look at as it is to read.

From a practical standpoint, this is a large sturdy book with a beautiful hardcover layout and nice plastic slipcase to boot. It will look very nice on your shelf or bookcase.

Because of these reasons, the story exposition, the wonderful illustrations and another deep well of factoids and information, I would most certainly deem this book essential reading for any Star Wars fan.

For more information on this book and other great releases by Epic Ink/Quarto Books, click HERE.