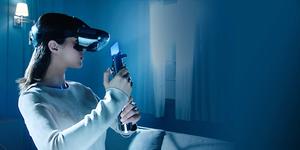 Available for Pre-Order for $199.99 at Best Buy and Lenovo Online; Compatible with Android phones and iPhones

With Star Wars: Jedi Challenges, Lenovo and Disney are bringing Star Wars to fans in ways they could previously only imagine, said Jeff Meredith, Senior Vice President and General Manager of Lenovo Consumer PCs & Smart Devices. Augmented Reality has always been an important part of Star Wars, and its exciting to bring these key moments to life by marrying Lenovo technology with Disneys storytelling.

Players will hone their Jedi talents across a variety of augmented reality-based experiences, each offering multiple levels of deep and immersive gameplay. To guide the player on this journey, Jedi Challenges will introduce an all-new Star Wars character, the Archivist. The Archivist instructs players in the ways of the Force and the knowledge of the Jedi. Throughout these challenges, users will train to perfect their lightsaber skills by taking on some of the most menacing villains the dark side has to offer, command armies in combat missions to defeat the Empire, and outwit their opponents in Holochess, all in augmented reality.