The EMP Museum in Seattle was the place to be last weekend for Star Wars! The museum is the first stop for the Rebel, Jedi, Princess, Queen: Star Wars and the Power of Costume exhibit from the smithsonian. Fans in or near Seattle will be able to check it out until October 4, 2015. 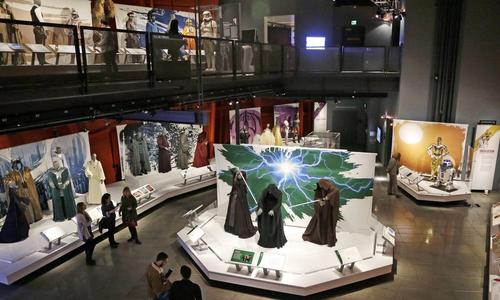 Through nine presentational chaptersIntroduction: Dressing a Galaxy; Jedi versus Sith: Form, Function and Design; Concept and Design for Royalty and Beyond; Symbolism and Military Power; Outlaws and Outsiders; All Corners of the Galaxy: The Galactic Senate; After the Throne: Padmés Journey; Darth Vader: Iconic Villain; and Droid Design: C-3PO and R2-D2visitors will be able to explore the creative process behind the names and faces that would come to shape the timeless story of a heros journey.

Revisit these now-famous characters through their most memorable attire, from the menacing black mask of Darth Vader, the gilded suit of C-3PO, and the monk-like robes of Jedi masters Obi-Wan Kenobi and Luke Skywalker to the lavish royal gowns of Queen Amidala and the bikini worn by Princess Leia when enslaved by Jabba the Hutt.

Featuring insightful interviews with artists, designers, and actors; and interactive flip books with sketches, photographs, and original notes that capture how the creative team brought these visions to reality, Star Wars and The Power of Costume presents an extraordinary experience that will invite visitors to discover their favorite characters like never before.

The exhibit marks a 12-city national tour that begins at EMP, where it will be on view January 31 through October 4, 2015.